More opportunities for National Championship qualifiers than ever before 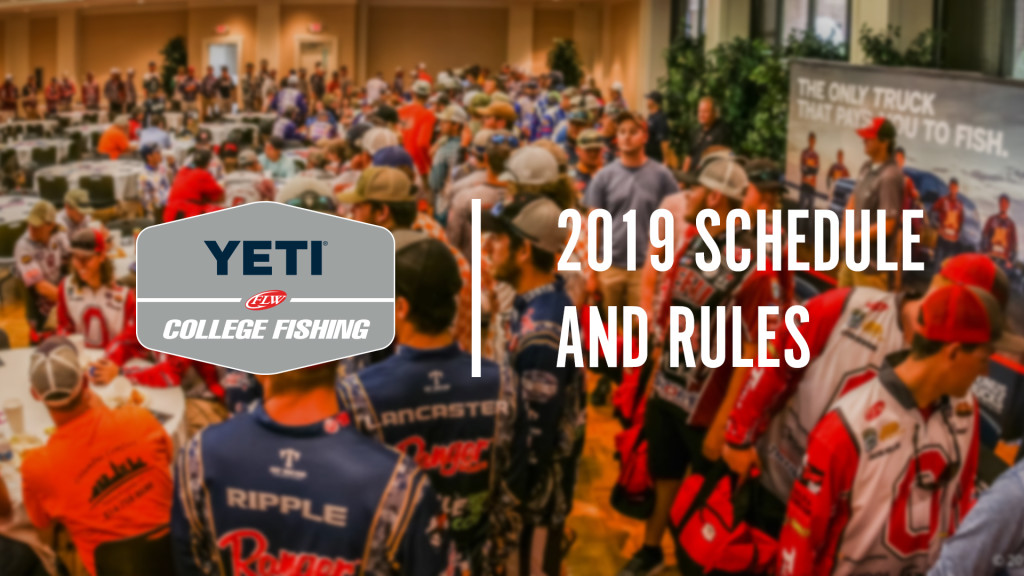 FLW announced Thursday the schedule, rules and entry dates for the 2019 YETI FLW College Fishing and Bass Pro Shops FLW High School Fishing seasons, highlighted by expanded FLW Live on-the-water coverage at the 2019 FLW College Fishing National Championship on the Potomac River in Marbury, Maryland, new advancement opportunities for young anglers to compete in the T-H Marine BFL All-American, Costa FLW Series Championship and the FLW Cup, and implementation of a new National School of the Year title, as well as titles in each individual conference.

Each FLW College Fishing angler competing in the All-American has a chance to qualify for the FLW Series Championship plus a second shot at qualifying for the FLW Cup.

“I am excited for the 2019 season and am confident that it will be the biggest and best College Fishing season yet,” says Kevin Hunt, Director of Tournament Operations, College and High School Fishing. “The fact that both anglers from the National Championship winning team will now advance to the FLW Cup, along with multiple qualifiers to the BFL All-American, is a fantastic opportunity for the teams and something that no other circuit can offer. I expect that these improvements will be very well received by college anglers, and I’m looking forward to getting the season kicked off in early February on Lake Seminole in Bainbridge, Georgia.”

In addition to FLW Live on-the-water coverage at the FLW College Fishing National Championship, each regular-season tournament and the Open will feature FLW Live weigh-in coverage.

Other improvements to the program include new YETI FLW College Fishing School of the Year titles, awarded to the top overall school of the season as well as the top school from each of the five conferences. Schools earn points based on their top two teams in each tournament. The school with the most points in each conference and overall at the end of the season win.

All FLW College Fishing anglers are now eligible for FREE Bass Pro Shops FLW Tournament Incentives at basspro.com/flwincentives. FLW College Fishing anglers receive a VIP discount card for 25 percent off Bass Pro Shops branded merchandise all year plus tournament bonuses. A nominal entry fee of $75 per team will be implemented for each event. Entries will be accepted starting Dec. 10 2018. Teams can register at FLWFishing.com or by calling 270.252.1000.

Top 20 teams advance to the 2020 National Championship. One additional team advances for every 10 teams over 200 competing.

Top 10 teams advance to the 2020 National Championship. One additional team advances for every 10 teams over 100 competing.

Complete rules for the 2019 YETI FLW College Fishing program can be found online at FLWFishing.com.Both members of the winning team advance to the 2019 FLW Cup where they are guaranteed $10,000 and can win as much as $300,000.