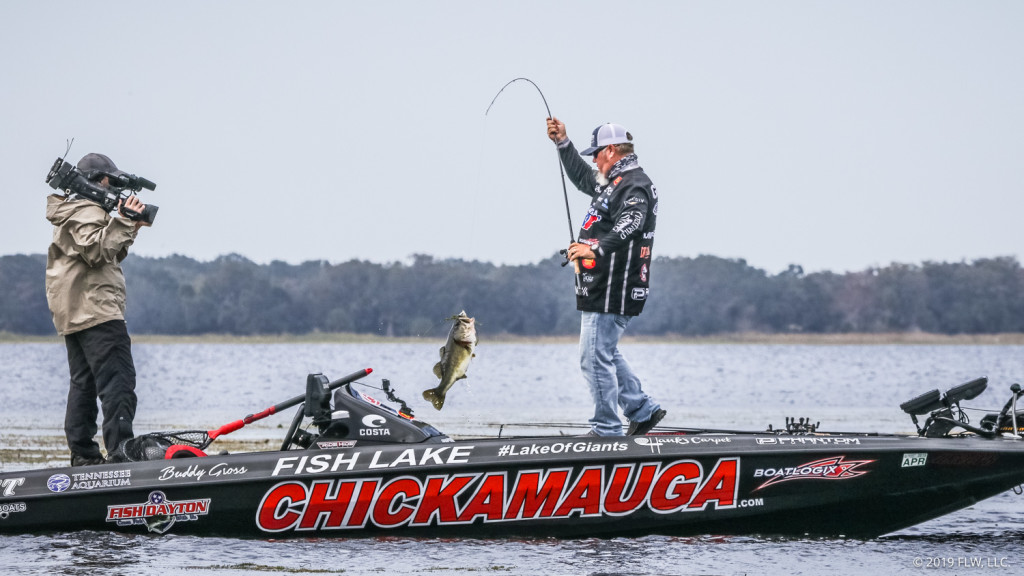 KISSIMMEE, Fla. – After an exciting day of movement atop the leaderboard, FLW Tour pro Buddy Gross of Chickamauga, Georgia, took the lead Saturday after the final bass had been weighed at the FLW Tour at Lake Toho presented by Ranger Boats with a five-bass limit weighing 19 pounds, 12 ounces. Gross’ three-day cumulative catch of 15 bass weighing 62 pounds even paces the final 10 pros as they head into Championship Sunday at the competition that features the world’s finest bass anglers casting for a top award of up to $125,000.

Right behind Gross (15 bass, 62-0) is hard-charging local angler Darrell Davis of Dover, Florida. Davis started the day in 13th place but moved into second after weighing a huge 25-pound, 12-ounce limit this afternoon – the largest of the day – bringing his three-day total to 15 bass weighing 60-15. Josh Douglas of Isle, Minnesota, (15 bass, 60-3) rounds out the top three, and was the only other pro to top the 60-pound mark after three days.

“I’ve got a good little spot – I think I’ve weighed in 14 of my 15 fish from it – but I’m really pushing it to its limits,” said Gross, who is seeking his second career FLW Tour win. “I keep looking for another spot, and I might have found one this afternoon. I caught one that culled – almost a 4-pounder – at the very last place I stopped on the way to weigh-in.”

Gross’ main area is an offshore stretch of hydrilla on Lake Toho. He said he’s been able to put a limit in the boat by 10 a.m. each day on the first two days of competition, but today it took until noon.

“The spot has both pre and postspawn bass. When the prespawners show up, they’re feeding, and when they feed I can see it and I can catch them – that’s my little flurry,” said Gross. “Tomorrow I’m going to catch what I can catch there and then start looking. I had some giant fish, but I still haven’t gotten a kicker. I haven’t had anything over 5½ [pounds] in three days and there’s a lot of stretches where I’ve caught some 7s, 8s and 9s in practice, so I’m going to have to move around a little more.”

Gross said he’s mostly relied on a swimbait and a pair of swimjigs, citing a natural light-colored Scottsboro Tackle swimbait, black and blue-colored swimjig with a green-pumpkin Zoom Z-Craw trailer and a white swimjig with the Scottsboro swimbait as a trailer. He’s also utilized a Nichols spinnerbait this week.

“The swimjig probably caught more weight than the swimbait today, but every other day it’s been the swimbait. I’m using a little underspin-type blade on the hook – an Owner Flashy Swimmer. It’s got a little extra flash and I think that’s what’s triggering the fish.”

The top 10 pros advancing to the final day of competition on Lake Toho are:

In FLW Tour competition, the full field of 170 pro anglers competed in the two-day opening round on Thursday and Friday. The top 30 pros based on their two-day accumulated weight advanced to Saturday. Now, only the top 10 pros continue competition Sunday, with the winner determined by the heaviest accumulated weight from the four days of competition.

The total purse for the FLW Tour at Lake Toho presented by Ranger Boats is more than $860,000, including $9,000 through 65th place in the Pro Division. The tournament is hosted by Experience Kissimmee and the Kissimmee Sports Commission.

Anglers will take off for the final day of competition at 7 a.m. EST Sunday from Big Toho Marina, located at 69 Lakeview Drive, in Kissimmee. Sunday’s championship weigh-in will also be held at the marina, beginning at 4 p.m.

Prior to the weigh-in Sunday FLW will host a free Family Fishing Expo at Big Toho Marina from 2 to 6 p.m. The Expo is a chance for fishing fans to meet their favorite anglers, enjoy interactive games, activities and giveaways provided by FLW sponsors, and learn more about the sport of fishing and other outdoor activities.

The popular FLW Live on-the-water program will air Sunday, featuring live action from the boats of the tournament’s top pros each day. Host Travis Moran will be joined by veteran FLW Tour pro Peter Thliveros to break down the extended action each day from 8 a.m. to 2 p.m. On-the-water broadcasts will be live streamed on FLWFishing.com, the FLW YouTube channel and the FLW Facebook page.