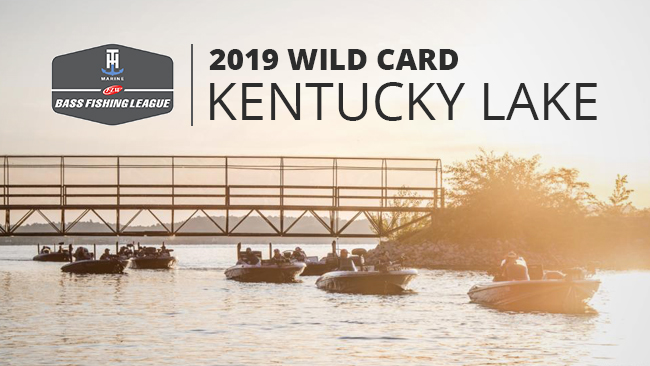 In order to be eligible to fish the no-entry-fee BFL Wild Card, anglers must have entered all five events within a BFL division during the 2019 season and fished at least two of them. In addition, anglers who fish in a regular BFL regional tournament are ineligible.

“We’re extremely excited to bring one of our favorite events of the year – the BFL Wild Card – to FLW’s home waters of Kentucky Lake,” said Daniel Fennel, BFL Director of Tournament Operations. “The lake has faced some challenges over the past few years, but we are starting to see some very positive changes due to the efforts to combat Asian carp. We are seeing a lot of short fish and baitfish for the first time in a few years. At a recent two-day BFL super-tournament we saw a 16-pound limit and a 7-pound, 2-ounce big bass. I expect we’ll see quite a few quality fish caught, and the anglers will have a competitive tournament.”

Anglers will take off from the Kentucky Dam Marina, located at 466 Marina Drive, in Gilbertsville at 7 a.m. CDT each day of competition. The weigh-ins will be held each day at the marina beginning at 3 p.m. All takeoffs and weigh-ins are free and open to the public.

During the BFL Wild Card, the full field competes both days, with winners determined by the heaviest two-day catch. The top six boaters and top six co-anglers will advance to the 2020 T-H Marine BFL All-American, held on Lake Hartwell in Anderson, South Carolina, April 30-May 2, hosted by Visit Anderson.

An optional pot is available to anglers who elect to participate at the BFL Wild Card tournament. Entry fees for the optional pot is $300 for boaters and $150 for co-anglers, with the top 20 percent of anglers who elect to participate in the optional pot receiving checks. There will be no official practice period or off-limits period prior to the pretournament meeting for the Wild Card. No contestant may be on tournament waters for the purpose of locating bass or potential fishing waters after the start of the pretournament meeting except during tournament hours.

Entry for the BFL Wild Card is now open and runs through Thursday, November 7, 2019, at 6 p.m. CDT. You may enter by phone on or before Wednesday, November 6, at 270.252.1000. Entries on November 7 will be taken onsite at the pretournament meeting at Kentucky Dam Marina.

The 2019 BFL is a 24-division circuit devoted to weekend anglers, with 128 tournaments throughout the season, five qualifying events in each division. The top 45 boaters and co-anglers from each division, along with the five winners of the qualifying events, will advance to one of six regional tournaments where they are competing to finish in the top six, which then qualifies them for one of the longest-running championships in all of competitive bass fishing – the BFL All-American.