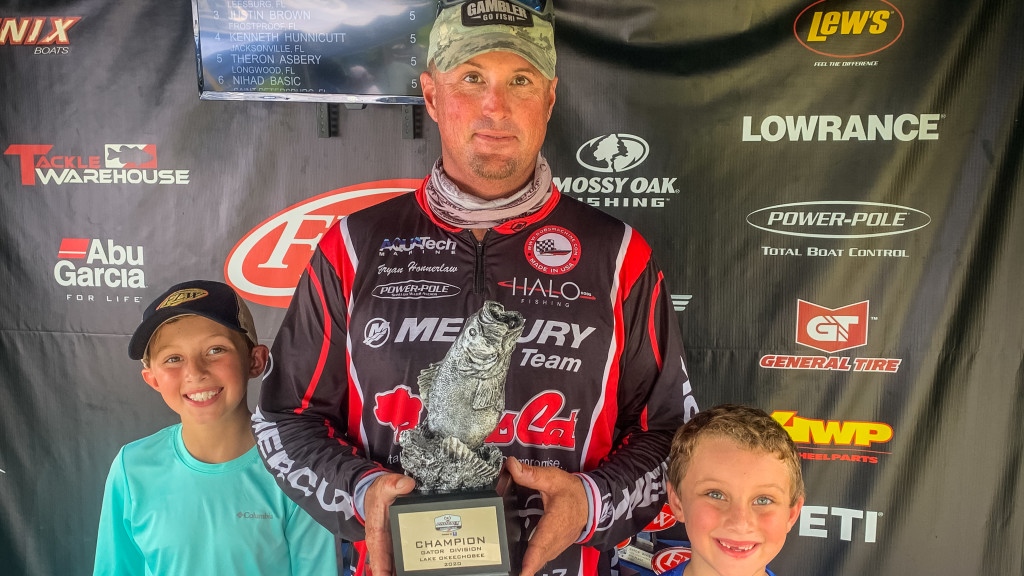 The tournament was the fifth and final event in the 2020 Gator Division presented by A.R.E. Truck Caps. Originally scheduled for two days, competition was canceled on Saturday due to Hurricane Sally.

“This win feels great, especially with how the day started,” said Honnerlaw. “I only had two fish by noon and was pretty upset around 12:30. The worst thing that can happen to you in a tournament is to get spun out, but I stayed positive and feel very blessed.”

Honnerlaw said the key to his victory was running to the river and letting himself calm down.

“After fishing a few places and getting little to no bites, I ran back to the river and fished a ledge with a Gambler Power Ned with a Gambler Fat Ace,” Honnerlaw continued. “I caught three big ones in a row before my co-angler caught a few good ones. Then I picked up a crankbait and caught another big one to finish out the day.”

Liss also took home an extra $500 as the highest finishing FLW PHOENIX BONUS member. Boaters are eligible to win up to an extra $7,000 per event in each Phoenix Bass Fishing League presented by T-H Marine tournament if all requirements are met. More information on the FLW PHOENIX BONUS contingency program can be found at PhoenixBassBoats.com.

Asbery earned the event’s Co-angler Big Bass Award of $386 with a fish weighing in at 8 pounds, 7 ounces.

Now the top 45 boaters and co-anglers in the Gator Division presented by A.R.E. Truck Caps, based on point standings, along with the five winners of each qualifying event, will advance to the Oct. 22-24 Phoenix Bass Fishing League Regional Championship on Lake Lanier in Gainesville, Georgia, hosted by Okeechobee County Tourist & Development Council. Boaters will compete for a $60,000 prize package, including a new Phoenix 819 Pro bass boat with a 200-horsepower Mercury outboard and $10,000, while co-anglers will fish for a new 18-foot Phoenix bass boat with a 200-horsepower outboard.