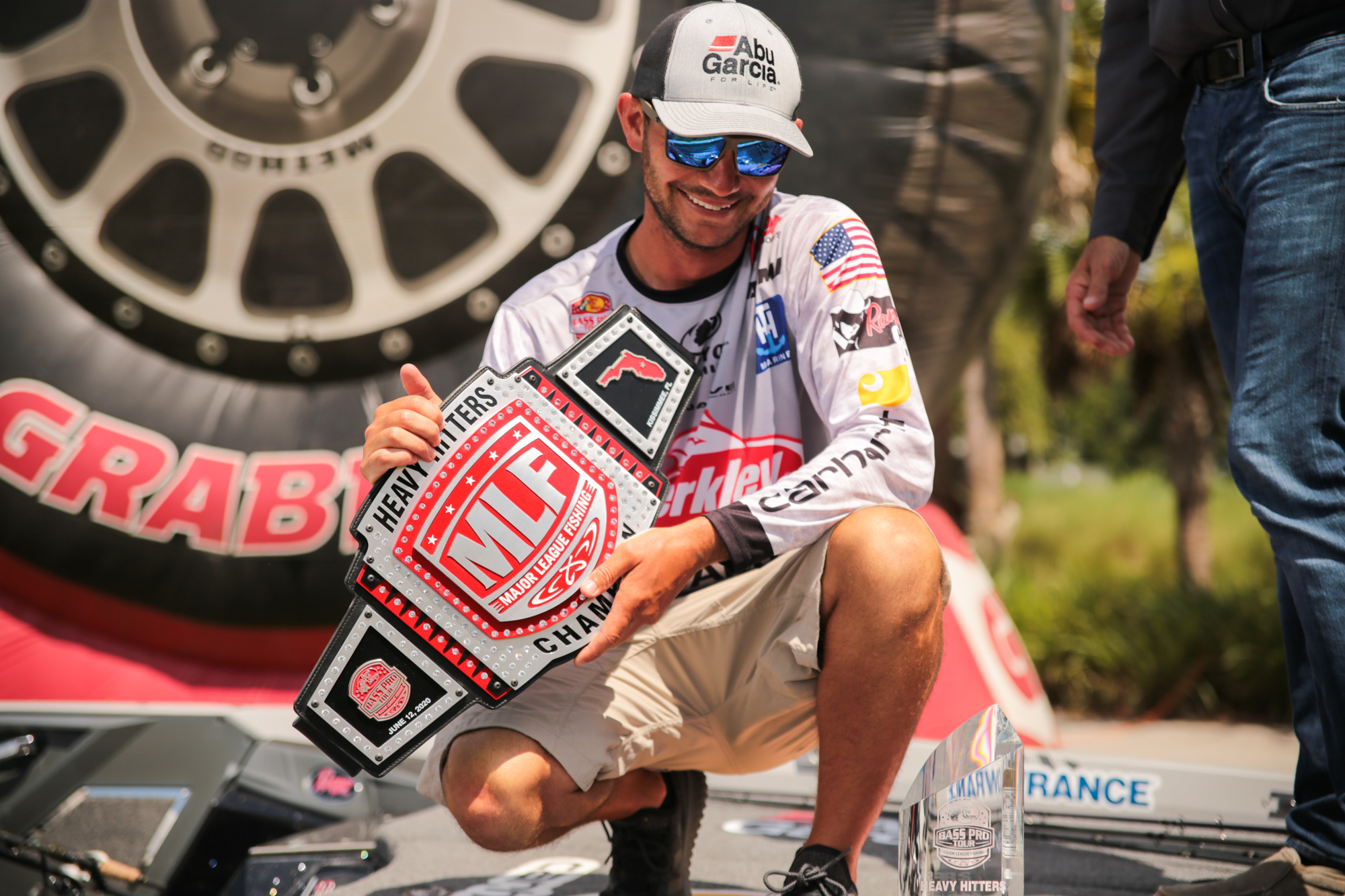 Jordan Lee is the winner of the Toyota Heavy Hitters Presented by Venmo. Photo by Phoenix Moore

June 12, 2020 (Kissimmee, Fla.) – Major League Fishing concluded their first live event today since pausing midseason to minimize the spread of the coronavirus. Jordan Lee won both the Toyota Heavy Hitters Presented by Venmo Title and the Berkley Big Bass Bonus for $200,000 in total winnings. This marks the second Bass Pro Tour Title for Lee on the Kissimmee Chain.

Berkley pro Jordan Lee scored 52 pounds, 9 ounces of largemouth in a single day featuring a 3-pound minimum scorable weight, the highest standard in any bass tournament. He finished 19-6 ahead of second place but never stopped looking for the next big bass offshore bouncing between crankbait and finesse worm. This win marks Lee’s second on the Kissimmee Chain in as many years; Lee won the inaugural Bass Pro Tour event in January 2019 on Lake Toho.

“Toho has been good to me,” said Lee as the clock wound down in the third period. “It’s hard to find those places, it wasn’t easy; but with the right equipment, I was able to make it happen. It was pretty cool to win the first-ever event last year, and then come back. I had some good memories down here; the Kissimmee Chain has been good to me as of late.”

As the clock ran down to zero, securing his victory, a teary Lee thanked fans for tuning in.

“I want to thank our fans, everyone who have watched and supported us this week, that’s what drives us. We really, really appreciate your support,” said Lee, a resident of Cullman, Alabama. “It’s been a blast out here on Toho. Thanks for tuning in; I hope you learned something. It was a dream day out here.”

Second-place finisher Bryan Thrift kept pace with Lee but found fewer scorable bass at the 3-pound minimum. Thrift ended the day with seven scorable largemouth totaling 33-3. While five of those were caught on a jig, Thrift told fans he approached today’s Championship Round with a three-bait strategy.

“I was fishing a lot of grass patches and isolated patches of hydrilla, so I came with a three-pronged approach today,” Thrift told MLF NOW! viewers after lines out. “I would brush a swim jig over the area, then hit it with a crankbait before dragging a worm through it. I caught a lot of my fish this week on a Damiki 12-inch, skinny worm that I cut down by two inches.”

After winning $25,000 earlier in the week for a 9-2 catch, General Tire pro Mark Rose finished third with 21-14, 30 pounds behind Lee. The Memphis-area pro was disappointed with the results but not with his effort.

“I’m not disappointed in my performance. I felt like I fished the best I could and tried to honor God in the process,” said Rose before offering words of encouragement to fans. “I’m thankful to MLF for coming out with this Heavy Hitters deal. In this fishing game, you’ve gotta keep it in perspective: You’re going to finish at the top, the bottom, and anywhere in between. Stay focused and learn from your mistakes.”

With the added challenge of the 3-pound minimum weight for scorable bass, two anglers went scoreless: Bass Fishing Hall of Famer Gary Klein and reigning MLF General Tire World Champion Jacob Wheeler. A zero-weight showcases how tough the fishing was on Toho today. Klein scored seven fish over 3 pounds in yesterday’s Knockout Round to make it into the Championship Round. Wheeler, who in the first rounds only had five of his 17 fish under 3 pounds, told MLF NOW! viewers that his score did not reflect his effort.

“I’ve been working all day, just not been getting a lot accomplished,” said Wheeler, a resident of Harrison, Tennessee. “I probably caught more fish today than any other single day. I caught eight or nine 2-pounders today. The big ones like to sit on isolated stuff. For me, that’s what I’ve been doing all day long, trying to get a big one.”

“Our Heavy Hitters event has set the bar higher than any other tournament in the history of bass fishing,” said Duckett. “Fans want to see the best pros do extraordinary things and this is the highest bar ever set in our sport.”

The Top 10 finished the Championship Round of Toyota Heavy Hitters Presented by Venmo as follows:

In addition to the traditional payout schedule based on finishing order, Toyota Heavy Hitters Presented by Venmo bonused the angler for the biggest bass caught in each group. The two-day Qualifying Rounds (June 7-10) paid a $25,000 big bass bonus ($50,000 total) to Mark Rose and Brent Ehrler respectively. The Knockout Round on Day 5 (June 11), featured a $50,000 big bass bonus to Michael Neal, while the Championship Round (June 12) bonused winner Jordan Lee with a $100,000 big bass bonus, on top of his Stage Title $100,000 prize.

Due to inflexible television production deadlines, MLF was forced to shorten the 2020 Bass Pro Tour after an 80-day, midseason pause to minimize the spread of COVID-19.  MLF fans can tune-in to MLF NOW! to watch the final stage of the 2020 Bass Pro Tour July 10-15. The Evinrude Stage Five Presented by Covercraft is currently scheduled on Lake Champlain, hosted Experience Vermont.