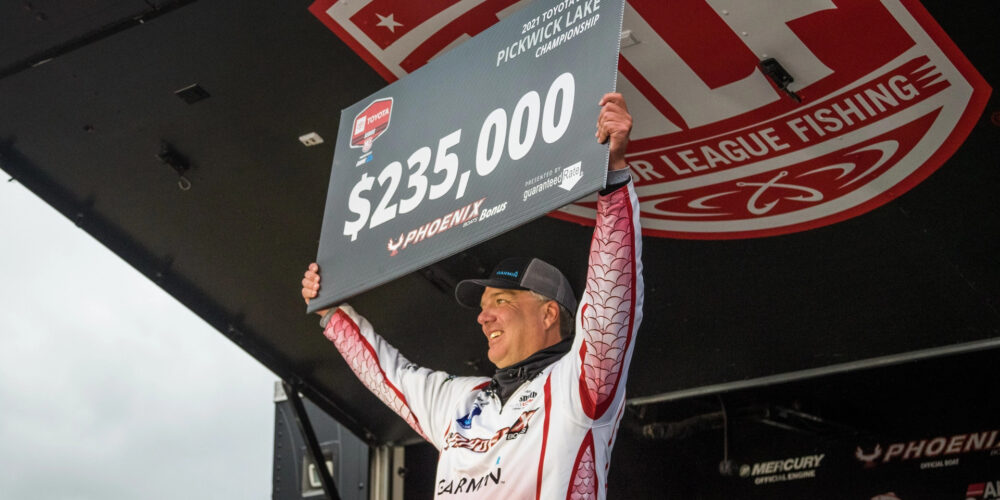 COUNCE, Tenn. – The final day of the Toyota Series Championship Presented by Guaranteed Rate at Pickwick Lake was a come-from-behind story for pro Brent Crow of Hartselle, Alabama, who after starting the day in 10th place brought a five-bass limit to the stage Saturday weighing 23 pounds, 1 ounce to vault to the top of the leaderboard and claim the title of 2021 Toyota Series Champion and the $235,000 top prize. Crow’s winning bag gave him a 4-pound, 1-ounce margin-of-victory over pro Mikey Keyso of North Port, Florida, who weighed a five-bass limit of 15 pounds, 3 ounces on Saturday, for a total of 48-1, good for second place and $50,000.

Saturday’s final weigh-in marked the finale of the 2021 Toyota Series Presented by A.R.E. season, which featured thousands of anglers from around the world competing for millions in cash and prizes.

Crow finished Day 1 of the competition in 28th place with a mere 13 pounds, 7 ounces on the leaderboard. He leapt 18 spots after Day 2, narrowly winning a tiebreaker against veteran angler Randy Blaukat of Joplin, Missouri to slide into the top 10 and qualify to fish the final day. Crow began Championship Saturday with 29 pounds, 1 ounce, before laying down the hammer with the heaviest bag of the tournament to upset the field and bring home the win.

“This is the biggest tournament I’ve ever won. I’m not trying to make a living tournament fishing, but when the schedule fits, I fish,” said Crow. “Once I realized the Toyota Series Championship was on Pickwick in the fall, I knew I needed to qualify for this event. I had some schedule conflicts with fishing the Southeastern division, but the Northern division schedule was appealing and looked like it would work out perfectly.”

The Alabama pro opted to fish the Northern division of the Toyota Series, competing against a slew of tough anglers to qualify for the championship, despite his lack of experience on the fisheries in that division.

“Those lakes are all awesome and full of fish,” said Crow. “I guide full-time down south, and the Northern schedule had events in July, August and September, when guiding is slower in my area. That also meant I didn’t have to battle the summer heat.”

Crow said he went into the Championship planning to fish below the Wilson Dam, but was dismayed the first few days to find the area wasn’t performing as well as he’d hoped.

“I’ve been fishing here and guiding for many years and fall is usually the time of year I fish the tailrace,” said Crow. “I purposefully didn’t go check it out in practice because I didn’t want to get in my head about whether or not I saw other anglers up there, or if the fish were biting good or anything that might spin me out.”

However, Crow said when he went up there the first two days of the event, he was discouraged to see the fish weren’t biting at all.

“They were running a little too much water out of the dam for me to do what I wanted to do, so the first two days I basically struggled and squeaked into the top 10 catching spotted bass,” said Crow. “I have a few places I can count on to catch big spotted bass, and I weighed in seven spots and three smallmouth the first two days, which saved me.

“I noticed last night that they weren’t going to run as much current out of the dam as the past two days, so I knew there was an opportunity to really catch them there on the final day.”

With a hopeful heart, Crow ran up to the dam again early on Day 3.

“I pulled up and checked the levels and when I saw the release level was at 35,000 (cubic feet per second), I knew it could be good,” said Crow. “I got out where I needed to be and made the first cast and the next hour was just chaos. I either caught one or lost one on every cast.”

Crow said if he could have written out exactly what he wanted to happen on Championship Saturday, it would have gone exactly the way it did.

“I probably wouldn’t have lost as many as I did, but I anticipated I’d be able to get a big bag under those conditions and thankfully everything worked out perfectly for me today.”

Crow said he’s put more effort into qualifying for this championship than he has any other event he’s fished – effort that was certainly not wasted as it resulted in nearly a quarter-million-dollar payout for the Hartselle native.

“The money is great, but it’s not all about money,” said an emotional Crow. “All fishermen have pride in what they do, and it feels good to be recognized, especially by your buddies. My phone has been lighting up all day with calls and texts from friends and fellow fishermen – most of them better fishermen than I am. It’s a great feeling that everyone is supporting me and taking the time to congratulate me today.

“There have been a lot of great fishermen that have won this trophy, and I’m probably nowhere near the caliber of most of them but I’ll take it,” finished Crow.

The top 10 pros at the 2021 Toyota Series Championship on Pickwick Lake finished:

Overall, there were 27 bass weighing 88 pounds, 14 ounces caught Saturday. Three of the final 10 anglers brought in a  five-bass limit.

The 2021 Toyota Series Championship Presented by Guaranteed Rate at Pickwick Lake was hosted by the Hardin County Convention and Visitors Bureau. The three-day, no entry fee tournament featured a field of 198 pros and co-anglers from around the world, competing for a top cash award of up to $235,000, plus multiple contingency bonuses.

The 2021 Toyota Series Championship Presented by Guaranteed Rate will premiere on the Outdoor Channel at 5 p.m. ET on Jan. 15, 2022, with additional airings to follow on the Sportsman Channel.

The full field of anglers competed on Days 1 and 2 of the event, with the top 10 pros and top 10 Strike King co-anglers based on cumulative weight from the first two days continuing to the third and final day. The 2021 Toyota Series champions were determined by the heaviest three-day total weight.

The 2021 Toyota Series Presented by A.R.E. consisted of six divisions – Central, Northern, Plains, Southern, Southwestern and Western – each holding three regular-season events, along with the International division. The highest finishing pro from each division at the championship claimed a $10,000 bonus.