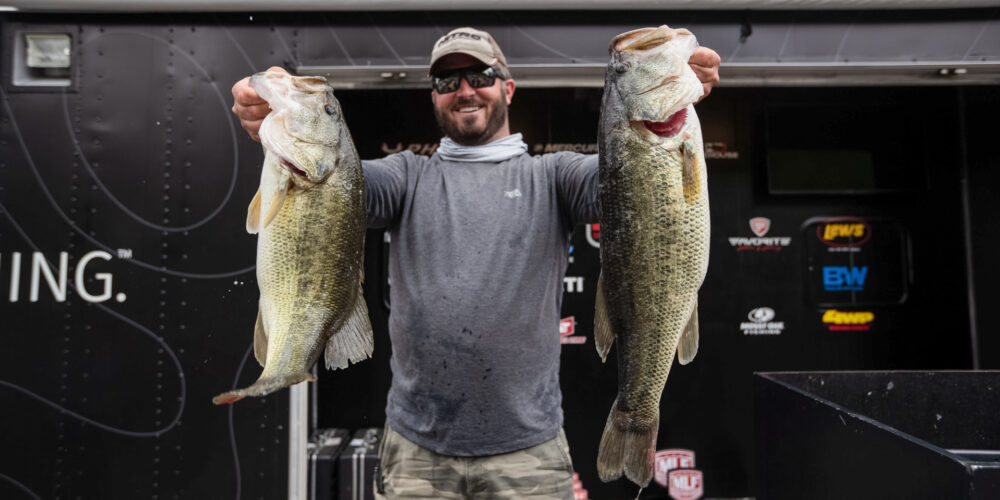 CHATTANOOGA, Tenn. – After sitting in 69th place after Day One of the three-day tournament, pro Matt Stanley of Alexandria, Tennessee rallied on Day Two, finishing in 13th place with 29 pounds, 9 ounces going into the final day. On Saturday, Stanley brought another limit weighing 22 pounds, 2 ounces to the scales to win the Toyota Series Presented by A.R.E. at Lake Chickamauga. Stanley’s three-day total of 15 bass weighing 51-11 earned him the win by a 1-pound, 11-ounce margin over second-place pro Kevin Meunier of Lamar, Indiana and earned Stanley the top payout of $60,000.

Hosted by Chattanooga Sports, the tournament is the third and final event of the season for the Toyota Series Central Division anglers and will feature the region’s best bass-fishing pros and Strike King co-anglers casting for a top prize of up to $75,000.

Stanley said he is typically hard-headed and tries to win the event on Day One, then ends up struggling toward the end of the tournament. However, he decided to switch up his mindset for this event.

“I fished a little slower during this tournament and made sure I caught five fish each time I went out,” Stanley said. “I just focused on maintaining a solid bag, that way I could have a shot of making it to the final day, then on the final day, I swung for the fences. I went from catching 8-15 keepers per day on the first two days, to only catching five on Day Three, but I dramatically increased my weights.”

Stanley said he threw a variety of baits over the three days, including a ¾-ounce Picasso Inviz R Wire Double Willow Spinnerbait with a 6-inch Culprit Skinny Jerk trailer, as well as a 5-inch Gary Yamamoto Senko, wacky-rigged, in bubble gum color.

“I feel like I got really lucky, getting on a big bite,” Stanley said. “The guys at the top after the first two days had at least one big fish, so I knew that was going to be the key to making it to the top of the leaderboard.”

Stanley said he only caught five fish on the final day, but one of those fish was a 9-pounder that was one of the catches of a lifetime, and that was all he needed.

“I’d been catching the outskirts of a large group of fish throughout the tournament and on Day Three I was finally the only one fishing that group but couldn’t get them to bite anything I was throwing,” Stanley said. “Eventually I had one hit the spinnerbait, so I knew they were bass. I pulled out a Megabass Jerkbait and tied it on 10-pound Seaguar Red Label Fluorocarabon Line on a Lew’s Speed Spool LFS Casting Reel with an iROD Genesis III Series Casting Rod, and they started biting.”

After catching a catfish earlier that morning that had completely wrecked his line and hooks, Stanley said he re-tied his jerkbait and blindly threw it out toward a shallow area, where he got another bite that he was positive was just another catfish.

“It was swimming away slowly, so I just held pressure on it, then it shook its head three times and I realized it was a giant bass. My line started coming up real slow, then the bass jumped about 40 yards from the boat, and we could see how big it was and I said, ‘Oh my God, what a bass.’

“It hit the water, then realized it was hooked and the fight was on. It jumped around and was being super erratic, acting crazy like a smallmouth and jumping several more times,” Stanley continued. “I told my co-angler I couldn’t look at it, because if it came off the hook, I was going to be sick.”

“This win feels great – It’s not really about the money, because I love fishing so much, but catching that 9-pounder made the whole week for me,” said the first time Toyota Series winner. “The trophy, money and bragging rights are an extra bonus, but catching a fish like that is the reason every guy out there started fishing in the first place.

“Everyone wants to win. You aren’t going to need all that money when you’re 100 years old, but you will look back and remember catching a fish like that,” Stanley added.

Drake took home an extra $1,000 as the highest finishing Phoenix MLF Bonus member. Boaters are eligible to win up to an extra $35,000 per event in each Toyota Series tournament if all requirements are met. More information on the Phoenix MLF Bonus contingency program can be found at PhoenixBassBoats.com.

The Day One Berkley Big Bass $150 award winner in the Strike King co-angler division, was Michael Corbett of Oxford, Alabama with a 7-pound, 12-ounce bass, while the Day Two $150 award went to Jim Opetaia-Williamson with a 6-pound bass.