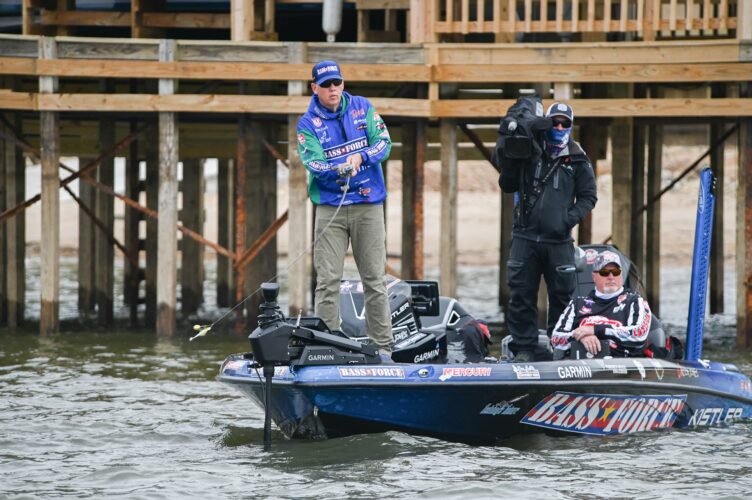 QUITMAN, Texas – Garmin pro Alton Jones of Lorena, Texas, maintained his lead throughout the day and held on to win the Qualifying Round Tuesday for Group B at the MLF Bass Pro Tour Toro Stage Two on Lake Fork Presented by Grundéns in Quitman, Texas. Over two days, Jones caught 28 bass totaling 117 pounds, 1 ounce to earn the first Qualifying Round victory of his career and advance straight to Thursday’s final-day Championship Round.

“I am so thankful to have caught the fish that I caught today,” said Jones, the reigning General Tire Heavy Hitters Champion. “I started on what was really my best area, from the first day, and the wind was blowing in there really hard. I think I could probably still have caught some fish in there, but it’s probably good that I didn’t because it’ll keep some of the other competitors from fishing on it as hard tomorrow in the Knockout Round. With that, I’ve also got several places that I think are going to replenish a little bit. So I think Thursday’s Championship Round could be very interesting.”

After catching 18 bass weighing 80 pounds, 7 ounces on Day 1, Jones backed it up on Day 2 with 10 more bass weighing 36-10. He said that he targeted numerous different timberlines with just two baits.

“I have found fish this week along the tree lines. They start out deep, and you can follow them a long way in – all the way up to the bank,” Jones said. “The depth range I’m fishing is from 10 to 12 feet up to 3 to 4 feet, just slow-rolling that big Stanley ¾-ounce Vibra-Shaft spinnerbait and throwing Ott’s little Rapala (Ott’s Garage Series) Slim crankbait. I’m a two-rod-Todd now, I think I can pick up those two baits and just roll with it come Championship Day.”

“Alton kind of teased me and I fell for it a little bit, because I thought I was going to be able to try to make a run at and maybe win this thing late in the day,” Ebare said. “I got really close – within 11 pounds at one point – but then he caught a couple of more and I just went into practice mode.

“I ran new water and was just looking to see how the fish are adjusting to the weather,” Ebare said. “I kind of found a new pattern today that I wasn’t doing before. I had been focusing on the creek channels, but today it seemed like the fish were focusing on the inside timberlines – that’s where I caught most of my fish today.”

Fishing in just his second ever Bass Pro Tour event, Ebare is excited about the opportunity that awaits him in the Knockout Round.

“I’m really excited for the Knockout Round, and I’m excited that I’ve had a great event so far here at Lake Fork in just my second event,” Ebare said. “We’ll see how it goes. The weather is supposed to be pretty nasty, but I’m thankful that I have my Gill Winter Jacket and Bibs with me to keep me warm, comfortable and dry. We’re going to go out and give it all we got tomorrow to try to make the Championship Round.

The remaining 38 anglers – 19 from each group – now advance to Wednesday’s Knockout Round, where weights are zeroed, and the anglers compete to finish in the top eight to advance to the Championship Round on Thursday. The Championship Round will feature Group A winner Jacob Wheeler, Group B winner Alton Jones, and the top eight finishers from the Knockout Round competing in a final-day shootout for the top prize of $100,000.

The six-day event, hosted by the Lake Fork Area Chamber of Commerce, the Wood County EDC, the Sabine River Authority and the Rains County Tourism Board, showcases 80 of the top professional bass fishing anglers in the world competing for a purse of $805,000, including a top cash prize of $100,000 to the winner.

The Top 20 pros in Qualifying Group B that now advance to Wednesday’s Knockout Round on Lake Fork are:

Overall on Tuesday, there were 202 scorable bass weighing 696 pounds, 9 ounces caught by 37 pros. The catch included three 7-pounders, one 8-pounder and one 9-pounder.

The 40 anglers in Group A competed in their two-day Qualifying Round on Saturday and Monday. The 40 anglers in Group B competed on Sunday and Tuesday. Now that the Qualifying Round is complete, the anglers that finished in second through 20th place from both groups advance to Wednesday’s Knockout Round, while the winner of each group advances directly to Thursday’s Championship Round. In the Knockout Round, weights are zeroed, and the remaining 38 anglers compete to finish in the top 8 to advance to the Championship Round. On the final day Championship Round, weights are zeroed, and the highest one-day total wins the top prize of $100,000.

The 38 anglers competing in Wednesday’s Knockout Round will launch at 7:30 a.m. CT from the Oak Ridge Marina, located at 2949 TX-154 in Quitman, Texas. The General Tire Takeout will be held at the Marina, beginning at 4:30 p.m. Fans are welcome to attend all launch and takeout events and also encouraged to follow the event online throughout the day on the MLF NOW! live stream and SCORETRACKER® coverage at MajorLeagueFishing.com.

The Toro Stage Two on Lake Fork Presented by Grundéns will feature anglers competing with a 2-pound minimum weight requirement for a bass to be deemed scorable. Minimum weights are determined individually for each competition waters that the Bass Pro Tour visits, based on the productivity, bass population and anticipated average size of fish in each fishery.

The MLF NOW!® broadcast team of Chad McKee, Marty Stone and J.T. Kenney will break down the extended action on all six days of competition from 7:45 a.m. to 4:30 p.m. CT. MLF NOW!  will be live streamed on MajorLeagueFishing.com and the MyOutdoorTV (MOTV) app.