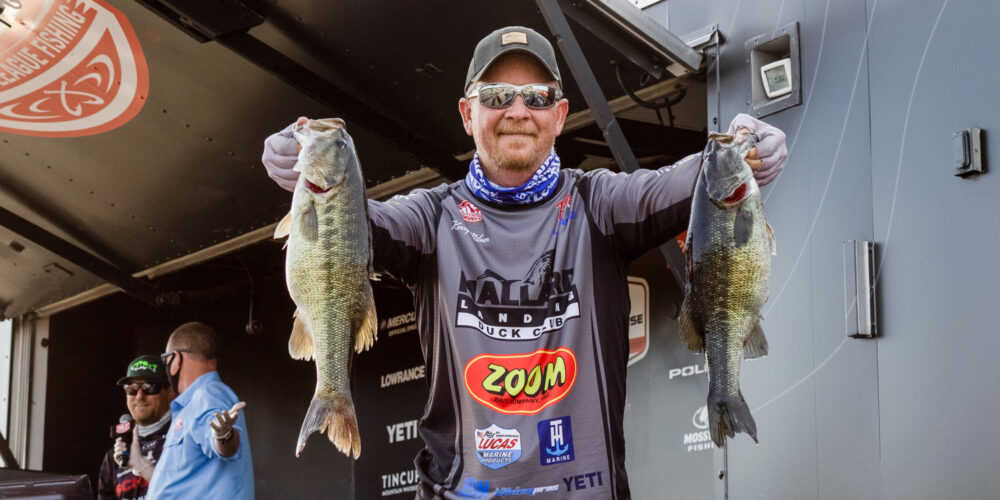 CULLMAN, Ala. – Bass fishing professionals from around the world set out on Lewis Smith Lake Thursday to begin their four-day competition for a shot to win up to $135,000 at the MLF Tackle Warehouse Pro Circuit presented by Bad Boy Mowers, Covercraft Stop 2 – Lewis Smith Lake. Pro Kerry Milner of Fisher, Arkansas weighed a five-bass limit totaling 18 pounds even to take the early lead after Day 1. Milner holds a mere 5-ounce lead over pro Joseph Webster of Winfield, Alabama, who caught five bass weighing 17-11, good for second place.

Milner brought five spotted bass to the scale but said he boated a whopping 20 keepers on the tough day.

“I’m seeing a lot of people fishing the same stuff I’m fishing, but having different results,” Milner said. “I’ve been able to go right in behind people and catch them.”

Milner said he has two spots on the main lake with schools of fish that he feels are especially good because of the herring in the area.

“I’m seeing herring float up, watching them on the graph and seeing fish spit them up when I catch them,” said Milner. “There are multiple fish in those areas – you can just sit there and catch them all day.”

When asked if he thought his bait was the difference-maker, Milner was guarded, but said he believed it was the total technique.

“I’m doing something a little different than everyone else and I think the other guys are missing them on the depth by just a bit,” Milner said. “I figured out what I was going to do in practice – I instantly went to a spot that sets up like these two areas, and caught a 3-pounder. I tried a few other things, then came back to this same technique and was able to shake off fish in five different spots on the lake. At that point, I knew what I needed to do and let the fish and the areas rest until competition day. That’s what I plan to do until those fish abandon me.”

It was refreshing for Milner to start out with a bang on Day 1 of the competition, as he said his prior two trips to Smith Lake didn’t go nearly as well.

“The other times we were at Lewis Smith, it was a little bit too early for the technique I’m using,” Milner continued cryptically. “I had a pretty good first day of practice one year, that set up just like this, but they left and got on beds. It’s still a bit too cold for that though, so I don’t think they are going to move up this week.”

Milner would only say that he was “fishing the way he wants to fish,” noting it was very familiar and the way he typically fishes on Arkansas’ Norfork Lake, Lake Dardanelle and other fisheries.

“This is what I look for everywhere I go,” Milner said. “ My fans and followers back home know exactly what I’m doing.”

Perhaps if the spots hold and the technique continues, Milner will clue us in on his technique and what worked so well for him on Thursday.

The top 10 pros after Day 1 on Lewis Smith Lake are:

In Tackle Warehouse Pro Circuit competition, the full field of 163 anglers compete in the two-day opening round on Thursday and Friday. The Top 50 pros based on their two-day cumulative weight advance to Saturday. Only the Top 10 pros continue competition on Sunday, with the winner determined by the heaviest accumulated weight from the four days of competition.

Anglers will take off at 7 a.m. CT Thursday through Sunday from Smith Lake Park, located at 403 County Rd 386 in Cullman. Weigh-ins will also be held at the park Thursday and Friday at 3 p.m. and Saturday and Sunday at 4 p.m. Attendance is limited to competing anglers, family, essential staff and media covering the event. Fans are encouraged to follow the action online through the MLF NOW! live stream and coverage at MajorLeagueFishing.com .

The MLF Tackle Warehouse Pro Circuit presented by Bad Boy Mowers, Covercraft Stop 2 – Lewis Smith Lake will feature live on-the-water coverage and a two-hour action-packed television show that will premiere on the Outdoor Channel on Sunday, July 18 from 7 to 9 a.m. ET and re-air on the Sportsman Channel this fall. Weigh-ins will be streamed daily and fans can catch live on-the-water action all day Saturday and Sunday, March 13-14 on MLF NOW! beginning at 7:30 a.m. CT at MajorLeagueFishing.com.