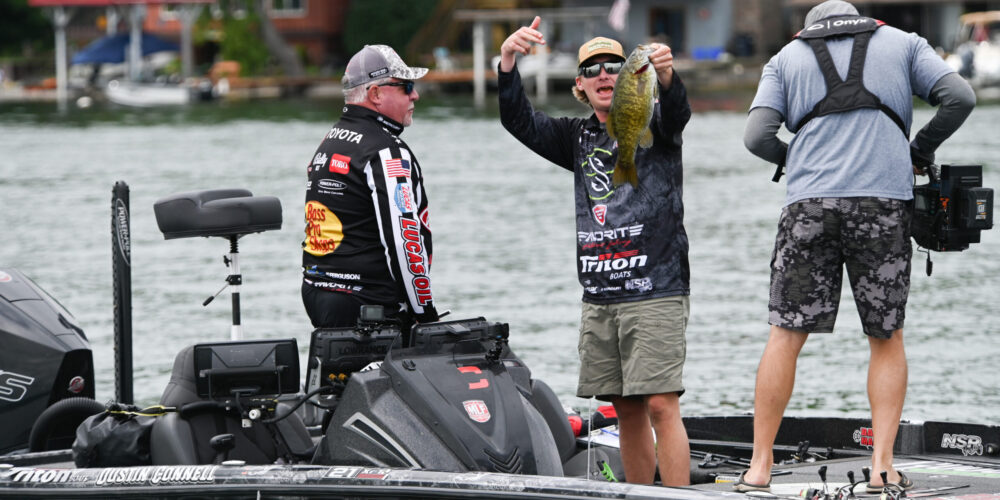 UNION SPRINGS, N.Y. – Googan Baits pro Dustin Connell of Clanton, Alabama, caught 22 scorable bass weighing 82 pounds, 2 ounces, to best the 38 anglers competing Wednesday and win the Knockout Round at the Fox Rent A Car Stage Six on Cayuga Lake Presented by Googan Baits in Union Springs, New York. The final 10 anglers are now set, and competition will resume Thursday with the final-day Championship Round. Weights are zeroed, and the angler that catches the heaviest one-day total will earn the top payout of $100,000.

This six-day tournament, hosted by the Village of Union Springs, showcases 80 of the best professional anglers in the world competing for a purse of more than $805,000. The tournament is live streamed each day at MajorLeagueFishing.com and the MOTV app, and also filmed for television broadcast later this fall on Discovery Channel.

The top eight pros from Wednesday’s Knockout Round that will compete in Thursday’s Championship Round on Cayuga Lake are:

“I can’t complain about anything, that was an awesome day,” said Connell, who won a Bass Pro Tour event earlier this year at Alabama’s Lewis Smith Lake. “There wasn’t much wind, it was a beautiful day in New York, and the smallmouth were biting. So, it feels good. This will be my fourth Championship Round this year, and it feels good to be in it and I feel like we’ve got a great chance.

“I set the hook today on a few that I didn’t want to, but I’m glad that I did, just knowing where they were at,” Connell said. “It gives me confidence in those areas. There are a ton of fish in this lake, and I backed off a bunch of areas. There were several places I went to that had 10 to 12 fish on them, and I’d catch one then leave. But these guys are catching them too, and it all zeroes out tomorrow, so we shall see.”

Like his Qualifying Round, Connell targeted smallmouth with a couple of different drop-shot baits and credited his Lowrance electronics as being crucial to his success.

“I was using a 7-(foot)2-(inch) medium(action) Hex, by Favorite Rods,” Connell said. “It is an awesome drop-shot rod, with enough backbone to get those big smallmouth up. I was using 12-pound Seaguar Gold Label, with a straight-shank Googan Baits drop-shot hook and a ¾-ounce weight with a (Googan) Drag N Drop. I was switching between goby baits and shad baits. Just using my electronics, panning around, finding these smallmouth and catching them.

Rounding out the Top 40 finishers on Cayuga Lake were:

Overall, there were 544 scorable bass weighing 1,775 pounds, 2 ounces caught by the 38 pros Wednesday.

The final 10 anglers will launch Thursday at 7:30 a.m. ET from Frontenac Park, located at 15 Creamery Road in Union Springs.

Also on Thursday, MLF will host a Celebration Event from 4:30-6 p.m. for fans of all ages, inviting fans to come out and celebrate with the professional anglers from the Bass Pro Tour as they crown the champion of the Fox Rent A Car Stage Six on Cayuga Lake Presented by Googan Baits. Before the celebration, a MLF watch party starts at 1:30 p.m., and the first 50 middle school or high school anglers in attendance will receive a free Abu Garcia rod and reel combo valued at $100. The final 10 Championship Round Bass Pro Tour anglers will be on hand at the trophy celebration to meet and greet fans, sign autographs, and take selfies.

The Fox Rent A Car Stage Six on Cayuga Lake Presented by Googan Baits features anglers competing with a 2-pound minimum weight requirement for a bass to be deemed scorable. Minimum weights are determined individually for each competition waters that the Bass Pro Tour visits, based on the productivity, bass population and anticipated average size of fish in each fishery.

The MLF NOW! broadcast team of Chad McKee, Marty Stone and J.T. Kenney will break down the extended action on Championship Thursday from 7:45 a.m. to 4:30 p.m. ET. MLF NOW! will be live streamed on MajorLeagueFishing.com and the MyOutdoorTV (MOTV) app.