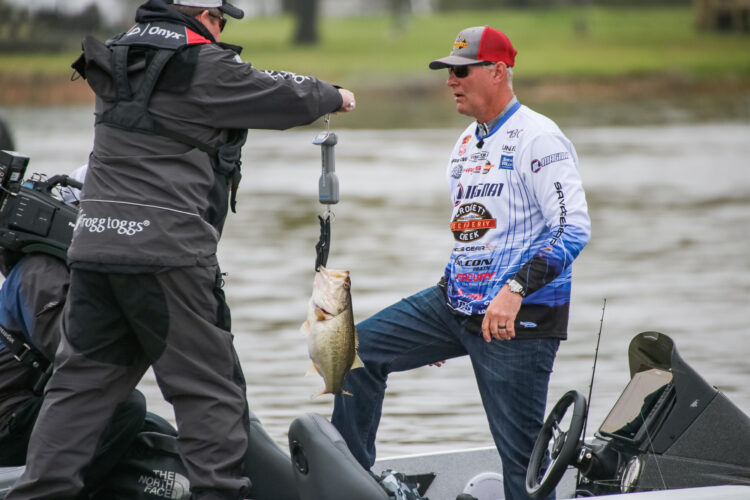 March 16, 2020 (LAKE FORK, Texas) Major League Fishing (MLF) continues to broadcast live to sports fans around the world. With 40 boats or fewer on the water and no weigh-in, the MLF format inherently involves social distancing, which has allowed the Bass Pro Tour to continue this week on Lake Fork despite canceling fan outreach and public gatherings onsite.

On Day 4 of the six-day tournament, Brandon Coulter won Group B Qualifying Round to advance to the General Tire Stage Three Presented by TrueTimber Championship Round on Wednesday. Justin Atkins finished second and maintains his record for the largest fish caught during competition at 10 pounds, 8 ounces. Dustin Connell and Jordan Lee each climbed 17 spots on the leaderboard to secure a spot in tomorrow’s Knockout Round. Kevin VanDam and Kelly Jordon fell 16 and 17 places respectively, which landed them below the Elimination Line.

Coulter began today in second place after falling behind Michael Neal by 1 pound with only seven minutes left on the first day of the Qualifying Round. Catching 11 bass weighing 52 pounds, 6 ounces, Crockett Creek pro Coulter led the field for much of the day finishing 10 pounds ahead of Atkins. He chose to fish offshore where he landed three fish over 5 pounds including one weighing 8 pounds, 1 ounce. The 49-year-old father of four is looking forward to his day off during tomorrow’s Knockout Round. He looks forward to fishing the infamous Lake Athens on Wednesday against Mark Daniels Jr. and the Top 8 (field of 10) from Tuesday’s Knockout Round.

“I’m exhausted,” said Coulter as the MLF official called for lines out at the end of Period 3. “It was a really fun two days. I didn’t expect to do this in these two days and now I get to go directly to the Championship after rest tomorrow. I’m looking forward to seeing which eight guys make it to Athens, and then let’s go have a shootout on Athens!”

Justin Atkins finished second in Group B Qualifying Round after catching the second most weight in Day 2 with 47 pounds, 1 ounce with 20 fish, including an 8-pound, 4-ounce largemouth during the first period. His record 10-8 fish that he caught on Saturday currently retains the lead as the heaviest fish caught in both MLF and Bass Pro Tour histories.

Dustin Connell and Jordan Lee leapt up the leaderboard by 17 places each. Connell landed the biggest fish of the day weighing 9-pounds even within 30 minutes of the competition start and caught a steady stream, including a 7-pound, 8-ounce bass throughout the morning before stalling out for much of the second and third periods. Connell ended with seventh place for the two-day round with 64 pounds, 15 ounces. Berkley pro Jordan Lee began the day in 31st place and proceeded to advance in a slow climb up the leaderboard including when he caught a 6-15, which launched him into 11th place an secured his position in the Knockout Round.

“I had a great day,” said Lee. “Lake Fork has been kind of stingy, but overall, I had a great comeback today and looking forward to tomorrow.”

Local pro Kelly Jordon fought with his home lake much of the day only to fall from sixth after Day 1 to 24th today. After catching 45 pounds on Saturday, Jordon was only able to score 3 pounds, 10 ounces today.

“Doesn’t that just make you sick,” said Jordan as the MLF official called lines out. “I just couldn’t make anything happen today; my home lake got me.”

The competition continues Tuesday when 38 anglers return to the water for the Knockout Round. Weights reset to zero and the top eight weights for the day advance to Wednesday’s Championship Round. Monday’s weather forecast shows slightly warmer temperatures and overcast with a high of 66.

The Bass Pro Tour began in 2019 and features 80 of the best professional anglers in the world, including Kevin VanDam, Edwin Evers, Aaron Martens, Mike Iaconelli, Jordan Lee, and Skeet Reese. Each stage includes six days of competition using the Major League Fishing, catch-weigh-and-immediately-release format, where every bass over a variable minimum weight, which is 2 pounds on Lake Fork for Stage Three, toward a cumulative weight total for the day.  Variable minimum weights are determined by fishery, akin to a golf course handicap. The field of 80 anglers is divided into two groups of 40 (Groups A and B) to compete on days one through four for the Qualifying Round. The winners of each Group earn an automatic berth the Championship Round. The anglers finishing in places 2-20 from each group in the Qualifying Round (40 total) advance to the Knockout Round on day five (Tuesday), which determines who will compete on that final day, the Championship Round (Wednesday), for the Stage title and $100,000.

In addition to the economic impact on a host community, Major League Fishing showcases the region through their award-winning, live and linear programming. Each Stage of the Bass Pro Tour is broadcast live on the Major League Fishing app, MyOutdoorTV (MOTV), and MajorLeagueFishing.com, totaling more than 325 hours of original programming. Fans can follow the fast-paced nature of the MLF format as it unfolds on the live leaderboard through “SCORETRACKER® updates.” Highlights from each Stage of the 2020 Bass Pro Tour will air on Discovery Network beginning in July 2020 and Sportsman Channel in early 2021.