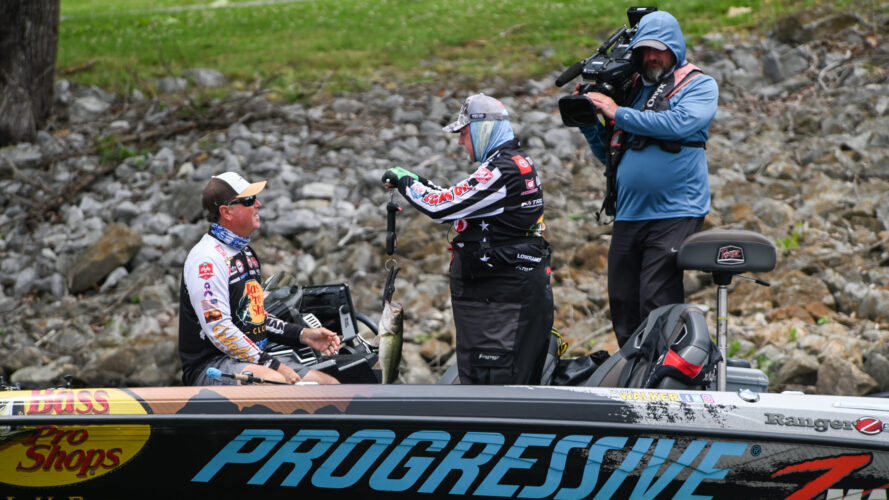 SPRING CITY, Tenn. – Despite a 2-hour, 15-minute lightning delay, rainy conditions throughout the day and a field of stellar pros nipping at his heels, Bass Pro Shops pro David Walker of Sevierville, Tennessee, caught 11 bass weighing 23 pounds, 10 ounces Tuesday to cruise to a Group B Qualifying Round win at the General Tire Stage Five on Watts Bar Lake Presented by Covercraft in Spring City, Tennessee. Walker’s two-day total of 21 bass weighing 45 pounds, 11 ounces, advances him directly to Thursday’s Championship Round – marking his first automatic berth to the Championship Round on the Bass Pro Tour – as the competition continues for the top award of $100,000.

“I don’t know what to say,” said a speechless Walker. “You talk about a day where you just end up making the right choices, all day long – it’s just unbelievable. I caught those fish on so many different rods and baits today, but I couldn’t be happier.”

Walker began the second day of his Qualifying Round in fifth place, with a solid 22-pound, 1-ounce footing, but steadily moved up SCORETRACKER® throughout the day. The Tennessee pro rallied to take the lead only seven minutes into the third period with a 2-pound, 3-ounce largemouth. Despite hard charges by Thrift and DeFoe, who both caught scorable bass in the final period to take over the lead, Walker managed to hold onto the top spot by the end of the competition day.

“This has been a tough season, and to have a day like this – let alone two back-to-back good days – is just amazing,” Walker said. “I’ve usually got some pretty good comebacks or statements and I just don’t have anything at all today.”

Although the win looks good “on paper” with the automatic advancement to the Championship Round, it was certainly a fight to the finish, with Walker catching 10 pounds in the last period alone to end the day on top.

“It’s just one of those things – in tournament fishing the highs are so high and the lows are really low, so it can be tough to try to keep everything on an even keel and not let it get to you,” Walker said. “You go out there and do the same things repeatedly, but you don’t get results like this very often, so you start to question yourself.

“One good day makes up for a whole lot of bad ones though, and we managed to put together two back-to-back good days,” Walker said. “I am so excited about this finish.”

The remaining 38 anglers – 19 from each group – now advance to Wednesday’s Knockout Round, where weights are zeroed, and the anglers compete to finish in the top eight to advance to the Championship Round on Thursday. The Championship Round will feature Group A winner Kevin VanDam, Group B winner David Walker and the top eight finishers from the Knockout Round, competing in a final-day shootout for the top prize of $100,000.

The six-day event, hosted by Fish Dayton, the Rhea County Economic Tourism Council and Spring City, Tennessee, showcases 80 of the top professional bass-fishing anglers in the world competing for a total purse of $805,000.

The Top 20 pros in Qualifying Group B who now advance to Wednesday’s Knockout Round on Watts Bar Lake are:

The 40 Anglers in Group A competed in their two-day qualifying round on Saturday and Monday – the 40 anglers in Group B on Sunday and Tuesday. Now that the Qualifying Round is complete, the anglers who finish in second through 20th place from both groups advance to Wednesday’s Knockout Round, while the winner of each group advances directly to Thursday’s Championship Round. In the Knockout Round, weights are zeroed, and the remaining 38 anglers compete to finish in the top eight to advance to the Championship Round. In the final day Championship Round, weights are zeroed, and the highest one-day total wins the top prize of $100,000.

The 38 anglers competing in Wednesday’s Knockout Round will launch at 7:30 a.m. ET from the Spring City Boat Ramp, located at 417 Toestring Valley Road in Spring City, Tennessee. The General Tire Takeout will be held at the ramp, beginning at 4 p.m. Fans are welcome and encouraged to attend all launch and takeout events and to follow the event online throughout the day on the MLF NOW! live stream and SCORETRACKER® coverage at MajorLeagueFishing.com.

The MLF NOW! broadcast team of Chad McKee, Marty Stone and J.T. Kenney will break down the extended action on all six days of competition from 7:45 a.m. to 4:30 p.m. ET. MLF NOW! will be live streamed on MajorLeagueFishing.com  and the MyOutdoorTV (MOTV) app.