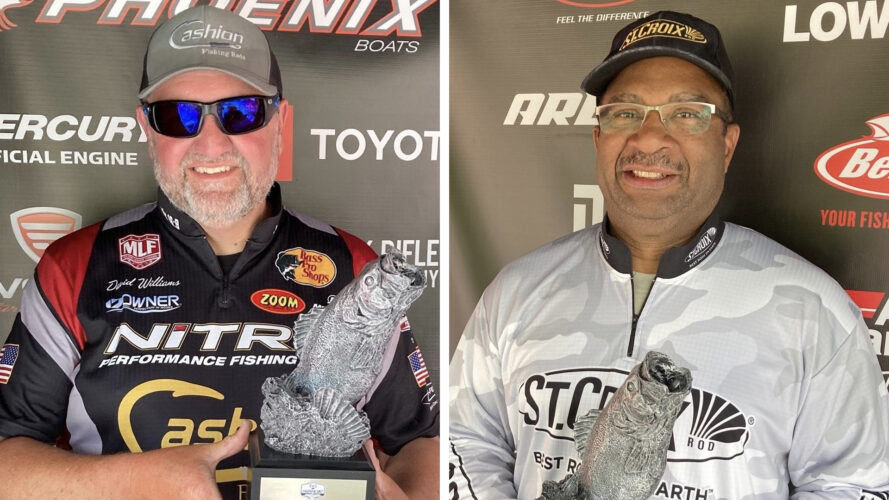 “I started off just covering a lot of water with an Evergreen Shower Blows Topwater bait,” Williams said. “I had been getting a couple of fish like that each morning, and if they blew up on it and I didn’t catch them, usually I could go back later and catch them. I think a lot of them were bedding and I was getting a reaction bite.”

Williams said he focused his efforts in the Nutbush Bridge area of Kerr, and added if wind was present he could catch fish on a spinnerbait around rocks on points where shad or blueback herring were spawning. Later in the day, he shifted tactics to swimming a jig or a jig fished on the bottom around wood or docks. Williams said his jig setup consisted of a ½-ounce Queen Tackle Jig with a Zoom Z Craw Jr. trailer. Williams said 12 to 15 of the 20 bass he caught during competition were keepers.

Williams finished third in Saturday’s BFL tournament on Kerr Lake and thought it would take 18 pounds to be in the running for a win Sunday. Williams edged that number and said the successful weekend held special meaning for him.

“I lost my mom last week and actually came up the day after I lost her and started fishing,” Williams said. “I dedicate this win to her. She was always my biggest fan.”

Hammack had a largemouth that weighed 5 pounds, 13 ounces that was the heaviest of the event in the Boater Division and earned the day’s Berkley Big Bass Boater award of $490.

Brown caught the largest bass in the Co-angler Division, a fish weighing in at 5 pounds, 8 ounces. The catch earned him the day’s Berkley Big Bass Co-angler award of $242.