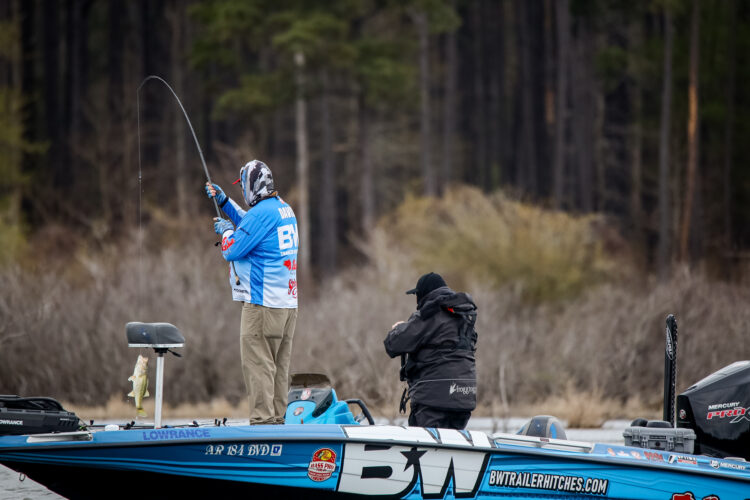 JASPER, Texas – For Major League Fishing (MLF) fans following the MLF Now!® live stream, it looked like pro Mark Davis was having a very tough day on the water. Midway through the second period, the Mount Ida, Arkansas, veteran had yet to weigh a single fish and he remained at the bottom of the leaderboard without a scorable bass. Then, all of a sudden, Davis returned to an area that had cellular service and the SCORETRACKER® leaderboard lit up.

In actuality, Davis had a fantastic morning, boating 10 bass in the first period and jumping out to a big lead on Day 1 of Qualifying Group B at the Toro Stage One at Sam Rayburn Reservoir presented by Power-Pole. It just happened to be in an area that did not have cellular coverage, and therefore his SCORETRACKER updates were unable to send. When all was said and done, Davis caught a total of 12 bass weighing 28 pounds, 2 ounces, Monday to gain the early lead after Group B’s day 1, midway through their two-day Qualifying Round.

Pro Gerald Spohrer of Gonzales, Louisiana, sits comfortably in second place, just two pounds back of Davis with seven bass totaling 26-2. Brent Ehrler of Redlands, California, finished the day in third place with seven bass for 22-2, six pounds behind the leader. The six-day event awards a top cash prize of $100,000 to the winner and is being live-streamed online and filmed for television broadcast on the Discovery Channel and the Outdoor Channel later this year.

“I caught my fish this morning on a Strike King Red Eye Shad,” Davis said. “I had found this area in practice and I knew that the fish were there. I went in there this morning and started fishing shallow and there wasn’t much going on, then I saw a couple of them come up and bust, way out off of the bank.

“The trick was that I had to cast it out and let the bait sink, then kind of pump it,” Davis said. “It took a cadence with that lure to get them to bite. They wouldn’t just bite it on my cast and retrieve. You had to pump it, you had to work it out and kind of feel it around in the grass.”

“The fish were really biting it good – just swallowing it,” Davis said. “But, when it was over, it was done. I mean, it was done. I went to a Carolina rig and was able to catch a few more, but they were small. The shad were there and when the fish were ready to feed, they’ll feed. They’ll probably feed again later this afternoon.”

Spohrer did not have as fast of a start to the morning as Davis did, but his bite managed to be a bit more consistent throughout the entire day.

“The way my morning started, it wasn’t looking good,” the Louisiana pro said. “I had an area that I thought I was going to be my best spot where I’d get the most bites, and I didn’t get anything. I just kept my head down and kept fishing, swimming a jig all day and covering water. I figured out a little deal around the cypress trees, and it proved to be a good method for me.

“The fish are moving around, but I think I have a good feel for what they are doing and it should keep getting better and better for me. Hopefully I can get back out here on Wednesday and try to win the round to advance to Championship Friday,” Spohrer went on to say.

“It ended up being a brutal day for me,” said third-place angler Ehrler. “It started off really well – I felt like I was getting in a groove – then I went the entire second period without catching anything. Then with just an hour left in the third period I finally caught one more 3-pounder. So really, after the first period, I sucked pretty much all day. I’ve got some decisions to make here before Wednesday because I’m just really not comfortable. Hopefully I can change some things up and advance.”

The top 20 pros from Qualifying Group B – Day 1 on Sam Rayburn Reservoir are:

Overall, there were 167 bass weighing 457 pounds, 11 ounces caught by 39 pros on Monday, which included two 7-pounders and six 5-pounders caught from Sam Rayburn.

Scroggins won Monday’s $1,000 Berkley Big Bass award, weighing in a 7-pound, 9-ounce largemouth which bit on a bladed swimjig right at the end of Period 3. Berkley will award $1,000 to the angler that weighs the biggest bass each day, and a $3,000 bonus to the angler who weighs the largest bass of the tournament.

The MLF Bass Pro Tour Toro Stage One at Sam Rayburn Reservoir presented by Power-Pole is hosted by the Jasper County Development District and the Jasper/Lake Sam Rayburn Chamber of Commerce.

The 40 Anglers in Group A compete in their two-day qualifying round on Sunday and Tuesday – the 40 anglers in Group B on Monday and Wednesday. After each two-day qualifying round is complete, the anglers that finish in 2nd through 20th place from both groups advance to Thursday’s Knockout Round, while the winner of each group advances directly to Friday’s Championship Round. In the Knockout Round, weights are zeroed and the remaining 38 anglers compete to finish in the top 8 to advance to the Championship Round. On the final day Championship Round, weights are zeroed and the highest one-day total wins. A full breakdown of the format can be found at MajorLeagueFishing.com.

The 2021 Bass Pro Tour features a field of 76 of the top professional anglers in the world – joined at each event by four pros that qualify from the Tackle Warehouse Pro Circuit – competing across seven regular-season tournaments around the country, competing for millions of dollars and valuable points to qualify for the annual Heavy Hitters all-star event and the REDCREST 2022 championship.

Television coverage of the Bass Pro Tour Toro Stage One at Sam Rayburn Reservoir presented by Power-Pole will be showcased across two two-hour episodes, premiering at 7 a.m. ET, Aug. 28 on the Discovery Channel. New MLF episodes premiere each Saturday morning on the Discovery Channel, with additional re-airings on the Outdoor Channel and the Sportsman Channel. Each two-hour-long, reality-based episode goes in-depth to break down each day of competition.