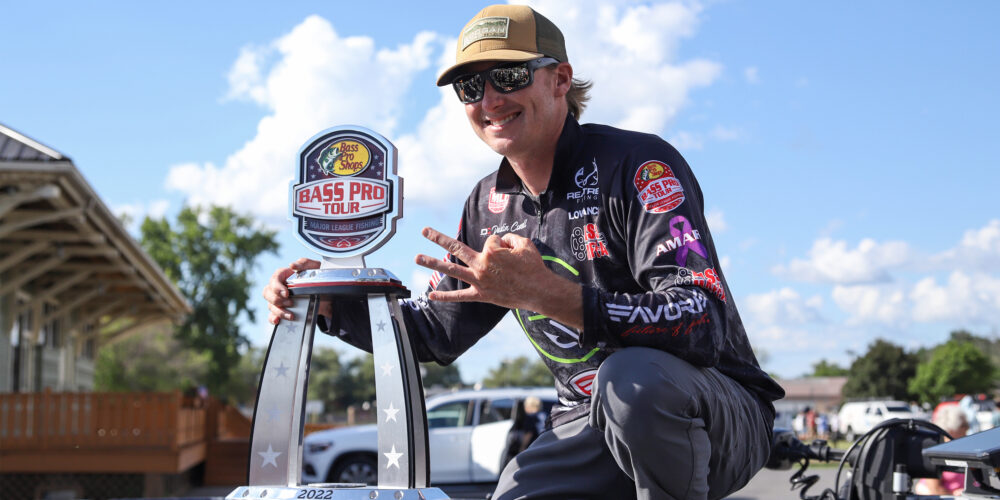 UNION SPRINGS, N.Y. – In a week where largemouth bass made up more than 80% of all of the fish caught on and weighed by the 80 anglers that competed in the Bass Pro Tour on Cayuga Lake, Googan Baits pro Dustin Connell, stuck with smallmouth and bested them all. The Clanton, Alabama, pro caught 25 scorable smallmouth bass weighing 96 pounds, 12 ounces, to win the Bass Pro Tour Fox Rent A Car Stage Six on Cayuga Lake Presented by Googan Baits in Union Springs, New York, on Thursday. The victory was the third Bass Pro Tour win of Connell’s career – second of the season – and earned him the top payout of $100,000.

“I am shook up. This is unbelievable,” an emotional Connell said. “I worked so hard for this tournament, man. I sat out here and battled these waves, every day, and I practiced so hard, from daylight to dark. It’s so special to win two in one year. This is just nuts.

“I’d only been here once before – I came here a couple of years ago for a MLF Cup event on Cayuga,” Connell said. “I only caught two bass, all day long. And now we’re holding the trophy up. And to win it with smallmouth – this is unreal.”

Connell spent the tournament drop-shotting a variety of baits, using his Lowrance ActiveTarget forward-facing sonar to follow the roaming schools of smallmouth.

“I caught all of my fish this week on a spinning rod. I had seven or eight of them tied up every day,” Connell said. “I was using 12-pound Gold Label Seaguar (fluorocarbon), and a variety of different baits. I was using a (Googan) Drag N Drop in green-pumpkin. I caught a bunch of key fish on it around all of the structure. For the suspended fish, I caught them on a shad bait. Just following them around. They love to roam during the summer and that’s the best way to catch them.”

“I look at guys like Jacob and Ott, and to even be mentioned in the same conversation with them, as that type of fisherman… my gosh,” Connell said. “I’m just a kid out here, living his dream. I am so blessed to get this win.”

The Top 10 pros from the Fox Rent A Car Stage Six on Cayuga Lake Presented by Googan Baits are:

Overall, there were 158 scorable bass weighing 519 pounds, 13 ounces caught by the final 10 pros on Thursday.

After six regular-season events in the 2022 Bass Pro Tour season, reigning Bally Bet Angler of the Year (AOY) Jacob Wheeler leads with 459 points with just one event left in the regular season, while Jordan Lee is in second place with 394 points. Dayton, Tennessee’s Andy Morgan sits in third with 373 points. Texas pro Alton Jones currently sits in fourth place with 356.5 points, while Randall Tharp rounds out the top five with 352 points.

The Fox Rent A Car Stage Six on Cayuga Lake Presented by Googan Baits featured anglers competing with a 2-pound minimum weight requirement for a bass to be deemed scorable. Minimum weights are determined individually for each competition waters that the Bass Pro Tour visits, based on the productivity, bass population and anticipated average size of fish in each fishery.

This six-day event was hosted by the Village of Union Springs and showcased 80 of the best professional anglers in the world competing for a purse of more than $805,000, with a top payout of $100,000. The tournament was live streamed each day at MajorLeagueFishing.com and the MOTV app, and also filmed for television broadcast later this fall on the Discovery Channel.