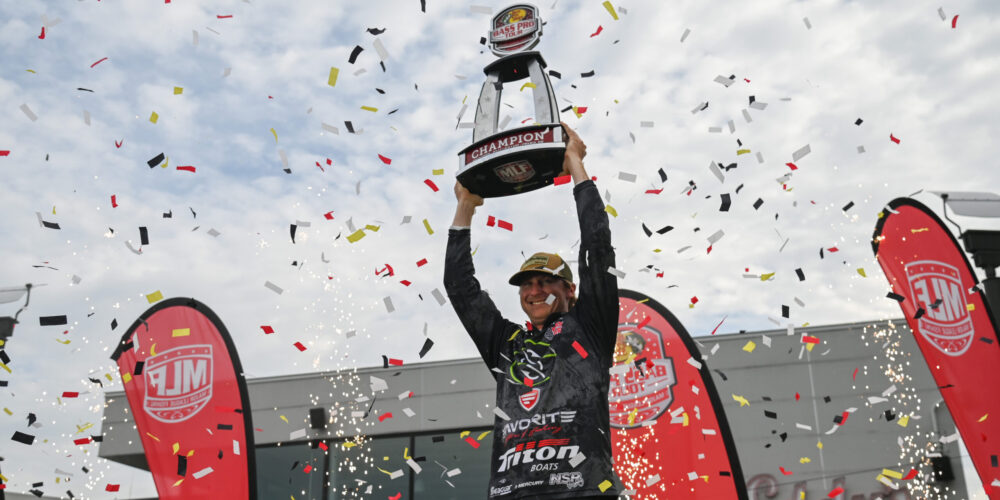 Connell’s Championship Round didn’t start off too hot. Through his first two-and-a-half hours of fishing, he was only able to muster three scorable bass for 13-6. Although one of those three was a 6-pounder, Connell knew his first period wasn’t what it needed to be to win.

“I started out this morning really slow,” Connell said. “I felt like I couldn’t find a bass. Then I had 4-foot waves rolling into my boat, so that wasn’t great. Finally, I found my zone and I settled in during the second period.”

Connell exploded in the second period, catching eight bass for 30-15, shooting him into second place, right below tournament leader, Dayton, Tennessee’s Michael Neal. That second period was made possible thanks to a waypoint Connell marked during his Knockout Round on Wednesday with time winding down in the day.

“Yesterday I had 15 minutes to idle around at the end of the Knockout Round,” Connell said. “I knew that I wasn’t on a winning deal. In the last 12 minutes of the day, I found six rocks. I marked a waypoint on one of them with three seconds left. I showed up there today and caught a 6-3 and a 5-8 off of that one rock I marked. That was the difference between winning and losing this tournament for me.”

That 6-pound, 3-ounce smallmouth pushed him past Neal for the lead, a lead Connell wouldn’t surrender for the rest of the day. It felt like a two-horse race for most of the day, that was until Sevierville, Tennessee, pro David Walker began surging in Period 3.

With less than 15 minutes left in the day, Walker caught four bass for 15-6 including a 5-10. Walker shot up SCORETRACKER® so fast that it was hard for Connell to keep up with how much weight Walker actually had.

“I didn’t have time to get nervous it happened so quick,” Connell admitted. “When he got to within 4 ounces with only two minutes left, I knew he was going to win. I was convinced he was going to bring one in with five seconds left and knock me out. Lucky for me, he didn’t. But really, congrats to David on an amazing day and tournament.”

Walker was unable to catch him, giving Connell back-to-back wins to round out the 2022 season. He’s done it on Smith Lake in Alabama and Cayuga Lake in New York, but this one in Minnesota means a little bit more to Connell.

“To end the season this way at one of my favorite lakes – I love Mille Lacs,” Connell said. “I love fishing in Minnesota. It’s unbelievable to win three events in a season, and I’m really glad I did it here fishing this way.”

Overall, there were 130 scorable bass weighing 476 pounds, 7 ounces caught by the final 10 pros on Thursday.

Connell also earned Thursday’s Championship Round $1,000 Berkley Big Bass award with a 6-pound, 3-ounce smallmouth that bit a drop-shot rig in Period 3. Hot Springs, Arkansas, pro Stephen Browning earned the $3,000 Berkley Big Bass award for the overall largest bass of the event with his 6-pound, 8-ounce smallmouth that he weighed on Day 3 of competition.

The Bally Bet Stage Seven on Mille Lacs Lake Presented by Minn Kota featured anglers competing with a 2-pound minimum weight requirement for a bass to be deemed scorable. Minimum weights are determined individually for each competition waters that the Bass Pro Tour visits, based on the productivity, bass population and anticipated average size of fish in each fishery.

The six-day tournament was hosted by the Mille Lacs Band of Ojibwe and showcased 80 of the best professional anglers in the world competing for a purse of more than $805,000, including a top payout of $100,000 to the winner. The tournament was live streamed each day at MajorLeagueFishing.com and the MOTV app, and also filmed for television broadcast.

Television coverage of the Bally Bet Stage Seven on Mille Lacs Lake Presented by Minn Kota will premiere as a two-hour episode at 7 a.m. ET, on Saturday, Nov. 19 on Discovery Channel. New MLF episodes premiere each Saturday morning on Discovery Channel, with additional re-airings on Outdoor Channel. Each two-hour long reality-based episode goes in-depth to break down each day of tournament competition.