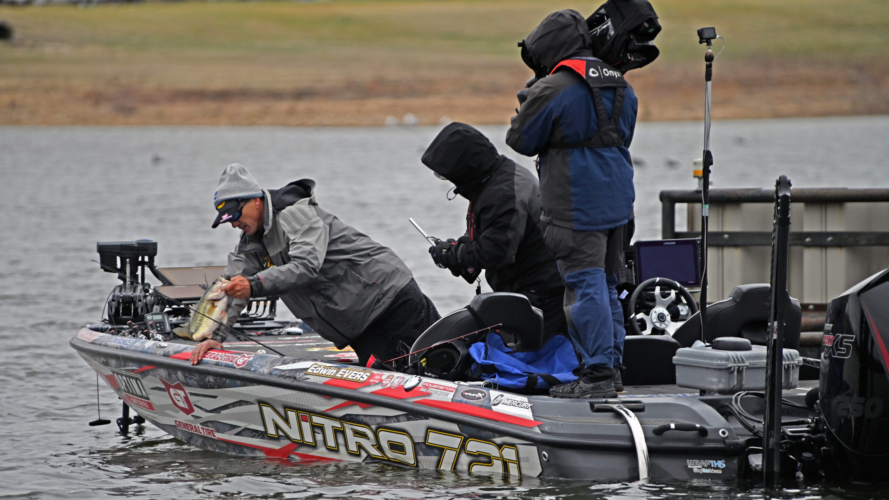 TULSA, Okla. – A field of the top 41 pro anglers from the Major League Fishing (MLF) Bass Pro Tour descended on Oklahoma’s Grand Lake O’ the Cherokees Wednesday morning for Day 1 of MLF’s REDCREST 2022 presented by Costa Sunglasses, the Bass Pro Tour championship. The five-day event, hosted by Tulsa Regional Tourism , features anglers competing for a total purse of $730,000, including a top cash prize of $300,000 to the winner.

After the final fish had been tallied on the SCORETRACKER® leaderboard, local bass-fishing superstar Edwin Evers of Talala, Oklahoma, sits atop the leaderboard with 13 bass totaling 39 pounds, 11 ounces.  Right behind Evers in second and third place are the two anglers many consider to be the hottest on the planet at the moment – Dayton, Tennessee’s Michael Neal, who boated 12 bass totaling 35-10 – and Academy Sports + Outdoors pro Jacob Wheeler of Harrison, Tennessee, who caught nine bass for 29-14.

Competition will continue Thursday, as the 41 anglers will again catch as much weight as possible before the field is cut to the top 20 after competition concludes tomorrow.

“I’m really happy with how the day turned out,” said Evers, who won the inaugural REDCREST championship in 2019 and is seeking to become the first angler to ever win two. “I focused on jerkbaiting in 6 to 15 feet of water. I didn’t lose any fish today, and my plan all seemed to come together.”

“The big key for me today was watching the bait on my (Lowrance) ActiveTarget to know what depth I needed to keep my jerkbait in when I got near the structure,” Evers said. “And they’re still biting the jerkbait, which I like. I was kind of afraid they were getting off of that bite.

“I feel like if I can catch just a couple of more fish tomorrow, I should be safe and moving into the Knockout Round,” Evers went on to say. “I’ve got a couple of areas that I found in practice that I didn’t touch today, so we’ll find out how good those spots are. I feel really good about this event so far and I am looking forward to getting back out here.”

The standings after Day 1 on Grand Lake are:

A complete list of results can be found each day at MajorLeagueFishing.com.

Overall, there were 213 scorable bass weighing 652 pounds, 8 ounces caught by the 41 pros Monday.

All 41 Anglers compete on Days 1 (Wednesday) and 2 (Thursday) of the event. After two days of competition, the field is cut to just the top 20 based on two-day total cumulative weight. The remaining 20 anglers are split into two groups – 10 compete on Day 3 (Friday) and 10 compete on Day 4 (Saturday). The top five anglers from each group based on total single-day weight will advance to the fifth and final day of competition (Sunday), where weights are zeroed and the angler that catches the highest total weight on the final day will be crowned the REDCREST 2022 champion.

The General Tire Take Off Ceremony will begin each day at 6:45 a.m. at the Wolf Creek Park and Boating Facility, located at 963 N. 16th St. in Grove, Oklahoma. Anglers will depart daily at 7:30 a.m. from the park and return after competition ends at 4 p.m. Fans are welcome to attend all launch events and also encouraged to follow the event online throughout the day on the MLF NOW!® live stream and SCORETRACKER® coverage at MajorLeagueFishing.com.

REDCREST 2022 Presented by Costa at Grand Lake O’ the Cherokees will feature anglers competing with a 2-pound minimum weight requirement for a bass to be deemed scorable. Minimum weights are determined individually for each competition waters that the Bass Pro Tour visits, based on the productivity, bass population and anticipated average size of fish in each fishery.

The 2021 Bass Pro Tour featured a field of 80 of the top professional anglers in the world competing across seven regular-season tournaments around the country. The top 41 anglers in the Angler of the Year (AOY) standings after the seven events qualified to compete in REDCREST 2022 Presented by Costa.

The MLF NOW!® broadcast team of Chad McKee, Marty Stone and J.T. Kenney will break down the extended action on all five days of competition from 7:45 a.m. to 4:30 p.m. MLF NOW!®  will be live streamed on MajorLeagueFishing.com and the MyOutdoorTV (MOTV) app.