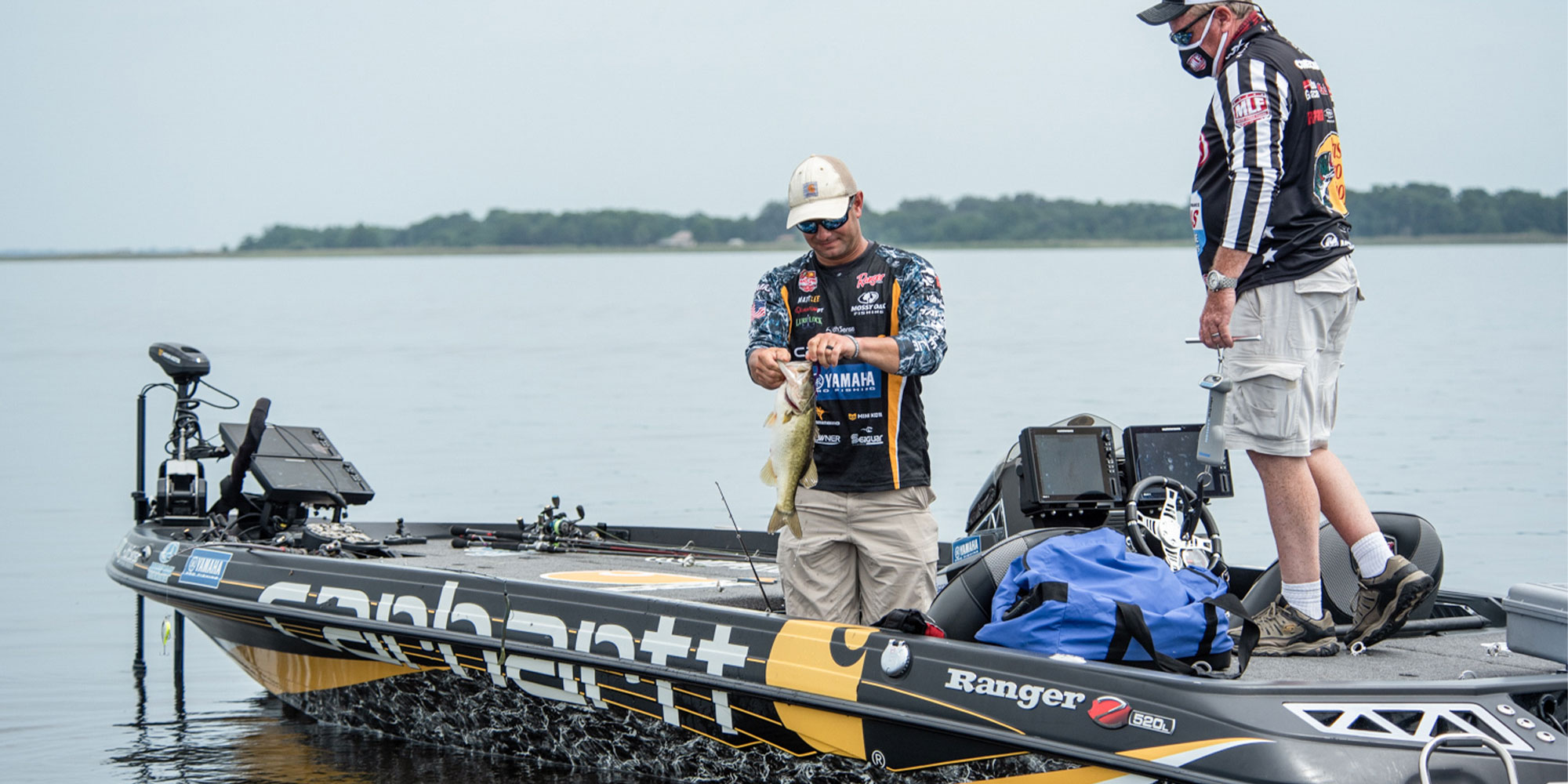 Matt Lee tallied the most weight of the day to finish with 43 pounds, 7 ounces. Photo by Garrick Dixon

June 9, 2020 (Kissimmee, Fla.) – Major League Fishing (MLF) pro Zack Birge won the Qualifying Round, Group A on Kissimmee Chain in the inaugural Toyota Heavy Hitters Presented by Venmo. Birge will advance directly to Friday’s Championship Round for a chance to win $200,000. California pro Brent Ehrler won $25,000 for this Round’s Heavy Hitters big bass bonus with an 8-pound, 6-ounce catch on Sunday, the first day of the competition. Matt Lee caught the most weight on Tuesday with 26 pounds, 5 ounces, which moved him into fifth place for this Round. Twenty anglers fell below the Elimination Line and will head home with their $4,000 consolation prizes. Each angler’s score resets to zero as the Top 20 pros advance. Competition continues tomorrow when Group B takes to the water for their second day of the Qualifying Round.

Birge grew his lead to 22 pounds to end the day in first place with a two-day total of 74 pounds, 3 ounces. Birge caught 20 pounds 12 ounces today, which meant that seven anglers caught more scorable weight than him, including Matt Lee, who caught the most Tuesday with 26 pounds, 5 ounces. Birge will advance directly to Friday’s Championship Round where he will compete against nine other anglers for the $100,000 Heavy Hitters Title and an additional $100,000 big bass bonus.

“Thank goodness; I’m advancing directly to the final,” said Birge at the conclusion of Tuesday’s competition. “Today was a trying day start to finish. I didn’t really get on like I wanted this morning. But I get to advance directly to the Championship (Round), which was my goal.”

Despite an otherwise slow day, Daiwa pro Brent Ehrler held his lead in the race for biggest fish caught in the two-day Qualifying Round for Group A with the 8-pound, 6-ounce largemouth he landed on Sunday. The lunker scored him a $25,000 big-fish bonus. Ehrler finished in 12th place with a two-day total of 29 pounds, 15 ounces and will advance to Thursday’s Knockout Round. Upon receiving the trophy for the first Heavy Hitters bonus, Ehrler said he’s grateful and looking forward to trying for another big fish on Thursday.

“Oh, I love it!” exclaimed Ehrler when he received the trophy from MLF on-the-water correspondent Rob Newell. “I was scared all day that someone was going to catch a bigger fish, but I’m so happy for this and I can’t wait to fish the Knockout Round for a chance to win $50,000.”

Carhartt pro Matt Lee tallied the most weight Tuesday moving him from 12th place to finish fifth with 43 pounds, 7 ounces over the two-day Qualifying Round, including his biggest fish of the Round, which weighed in at 5 pounds, 5 ounces.

“Today started really slow with only two, non-scorable catches in the first period,” recalled Lee. “I thought I could make more happen with a moving bait, but I focused on the changing conditions and adapted my strategy, which led to six fish in a row in Period 2. I’m really happy with how it ended up.”

Abu Garcia pro Scott Suggs fell just below the Elimination Line in 21st place after catching no fish on Sunday’s first day of competition and rallying 21 pounds today, including a 5-pound, 8-ounce bass midday. With only one fish caught in the Period 3, Randy Howell landed a 4-pound, 13-ounce largemouth with only 32 minutes left in regulation pushing Suggs out. When asked what he changed to go from zero to the seventh-highest weight of the day, Suggs says he didn’t make a change in his game, the conditions changed around him.

“You can ask my (MLF) official,” said Suggs after he returned to the ramp. “I went to the exact same place, threw the exact same thing – speed worm and magnum finesse worm in June bug – as I was at on Sunday where I caught a lot but no keepers. Today, I caught fewer fish but more quality. Luckily, I got a couple bites early, which led me to stick with it. I got some good points for the year, which is my saving grace.”

Suggs started Heavy Hitters in 39th place for the overall points standings for the 2020 Bass Pro Tour. His finish today will help his standings in points to qualify for REDCREST, the MLF Championship, which is scheduled for February 2021 in Tulsa, Oklahoma.

The Top 5, Toyota Heavy Hitters Presented by Venmo Qualifying Round, Group A finished as follows:

In addition to the traditional payout schedule based on finishing order, Toyota Heavy Hitters Presented by Venmo bonuses the angler for the biggest bass caught in each Group. The two-day Qualifying Rounds (June 7-10) will pay a $25,000 big bass bonus ($50,000 total). The Knockout Round on day five (June 11), will feature a $50,000 big bass bonus, while the Championship Round (June 12) will feature a $100,000 big bass bonus, on top of the Stage Title $100,000 prize. Despite Mark Daniels Jr. holding the lead much of the day with a 7-15, Rose’s 9-2 late in Period 3 landed him in the lead for the $25,0000 “Heavy Hitter” big fish bonus for Qualifying Round, Group B, which concludes on Wednesday.

The competition continues Wednesday when Group B returns for their second and last day of the Qualifying Round. The anglers who finish in 21-40th place in Group A will be eliminated, which the top 20 will advance to the Knockout Round on Thursday. The winner of Group B will earn an automatic berth to Friday’s Championship Round or the opportunity to fish in the Knockout Round and a chance to land the $50,000 big bass bonus. Major League Fishing rules indicate that if the Qualifying Round Group winner chooses to fish Knockout Round, they forfeit their automatic berth and will need to secure a Top-10 finish in the Knockout Round to advance to the Championship. General Tire pro Skeet Resse leads Group B by nearly 5 pounds. Mark Rose leads the $25,000 Heavy Hitters bonus with a 9-pound, 2-ounce largemouth.

Pending no weather delays, the day begins with launch at Big Toho Marina, Kissimmee, Fla., 6:15 a.m. ET before lines-in at 7:00 a.m. Period 1 ends at 9:30 a.m. Period 2 spans 9:45 a.m. until 12:15 p.m. Period 3 begins at 12:30 p.m. and lasts until day’s end at 3:00 p.m. The General Tire Takeout show airs approximately 3-4 p.m. from the water. Fans can catch all the action every day of competition on MLF NOW! live stream on MajorLeagueFishing.com or download the MLF app for your Apple or GooglePlay device or on MyOutdoorTV (MOTV).