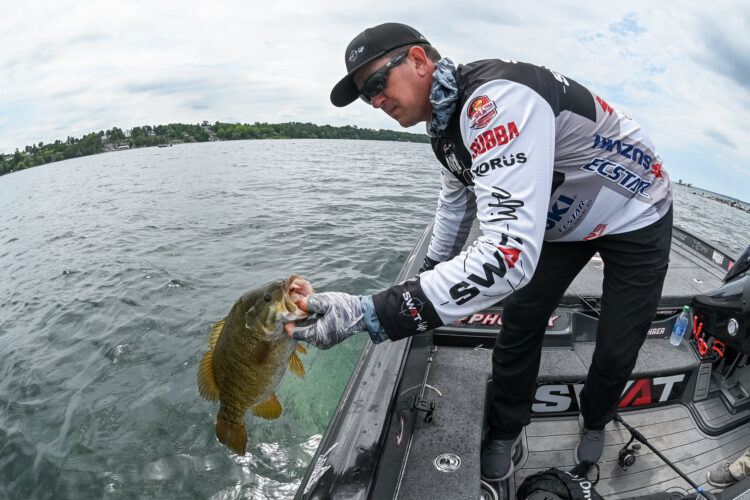 MASSENA, N.Y. – Pro Gerald Spohrer of Gonzales, Louisiana, caught 35 scorable bass Tuesday weighing 130 pounds, 8 ounces to win the Knockout Round and advance to the final day of competition at the Major League Fishing (MLF) Bass Pro Tour General Tire Stage Five Presented by Berkley at the St. Lawrence River in Massena, New York. The final 10 anglers are now set, and competition will resume Wednesday morning with the Championship Round. Weights are zeroed, and the angler that catches the most weight will win the top prize of $100,000.

The six-day tournament, hosted by the Town of Massena and Fish Massena, featured 80 of the top professional anglers from around the world competing for a purse of $805,000, including a top cash prize of $100,000 to the winner.

The top eight pros from Tuesday’s Knockout Round that will compete in Wednesday’s Championship Round on the St. Lawrence River are:

“It feels great to finish the Knockout Round in first place, but tomorrow is when it really matters,” said Spohrer, who earned his third Championship Round appearance of the season. “It was a tough second period, but after the storm came through it got slick and sunny and I was able to see everything in my area and there were just 4-pounders everywhere.

“I went through and just plucked them off, one at a time,” Spohrer continued. “It was pretty much a mix between a drop-shot rig and a little Ned-style bait. I’ve gotten here this week with a marabou jig, but today I sight-fished because it was calm.

“I’m pumped up for tomorrow,” Spohrer went on to say. “This is my third top-10 finish this year in five tournaments and we’re right in the hunt for the Angler of the Year title. To win another round – it’s been a great season and I am so blessed.”

Overall, there were 893 bass weighing 2,841 pounds, 7 ounces caught by the 38 pros competing Tuesday.

Berkley pro Justin Lucas won his second $1,000 Berkley Big Bass Award of the week on Tuesday, catching a 6-pound smallmouth on a drop-shot rig in Period 2. Berkley will award $1,000 to the angler who weighs the biggest bass each day, and a $3,000 bonus to the angler who weighs the largest bass of the tournament. Lucas also currently leads for largest bass of the tournament with a 6-pound, 13-ounce smallmouth that he caught on Day 1.

The General Tire Stage Five at the St. Lawrence River Presented by Berkley features anglers competing with a 2-pound minimum weight requirement, meaning each bass caught must weigh at least 2 pounds for it to be deemed scorable. Minimum weights are determined individually for each competition waters that the Bass Pro Tour visits, based on the productivity, bass population and anticipated average size of fish in each fishery.

The MLF Bass Pro Tour General Tire Stage Five at the St. Lawrence River Presented by Berkley is hosted by the Town of Massena and Fish Massena.

The 40 Anglers in Group A competed in their two-day qualifying round on Friday and Sunday – the 40 anglers in Group B on Saturday and Monday. After the two-day Qualifying Round, the anglers that finished in 2nd through 20th place from both groups advanced to Tuesday’s Knockout Round, while the winner from each group advanced directly to Wednesday’s Championship Round. In the Knockout Round, the weights were zeroed and the remaining 38 anglers competed to finish in the top 8 to advance to the Championship Round. Tomorrow, in the final day Championship Round, weights are zeroed and the highest one-day total wins.

The final 10 anglers will take off from the Massena Intake Boat Launch Ramp, located on Route 13, in Massena, at 8:30 a.m. ET Wednesday. The General Tire Takeout and Championship Moment will also be held at the Massena Intake, beginning at 5:30 p.m. Fans are welcome to attend all takeoff and takeout ceremonies and also encouraged to follow the event online throughout the day on the MLF NOW!® live stream and SCORETRACKER® coverage at MajorLeagueFishing.com.

The MLF NOW!® broadcast team of Chad McKee, Marty Stone and J.T. Kenney will break down the extended action from the final day of competition from 9:15 a.m. to 6 p.m. ET on Wednesday. MLF NOW!®  will be live streamed on MajorLeagueFishing.com and the MyOutdoorTV (MOTV) app.