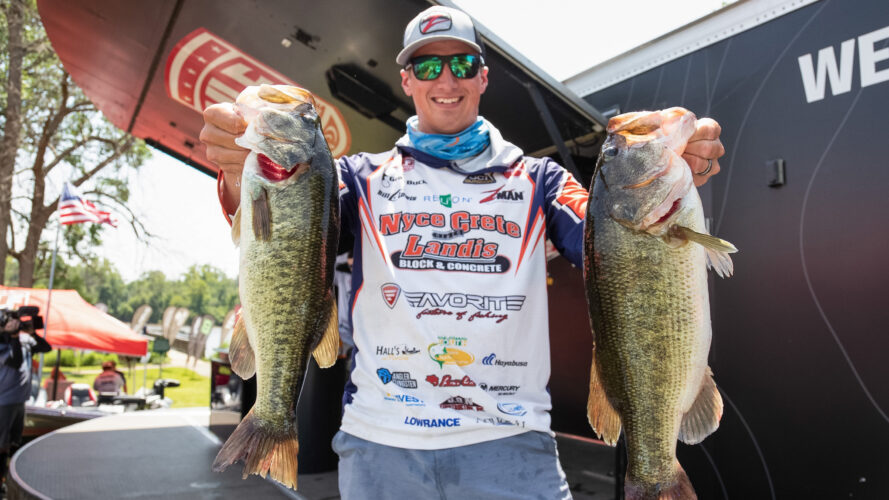 RICHMOND, Va. – The James River showed out on Thursday. After 154 of the top professional bass-fishing anglers in the world launched this morning at the Toyota Stop 5 on the James River Presented by PowerStop Brakes, 153 of those pros returned to the weigh-in scale this afternoon with a five-bass limit. And the lone pro that didn’t catch a limit still managed to bring four bass to the scale.

After the final fish had been tallied, Green Lane, Pennsylvania, pro Grae Buck, who has two Top-25 finishes already this season, jumped out to the early lead with a five-bass limit weighing 21 pounds, 3 ounces. He’ll bring a slim 4-ounce lead into Day 2 over Brookeland, Texas’, Dakota Ebare, who weighed a limit totaling 20-15. Chris Groh of Spring Grove, Illinois, sits just 8 ounces behind Ebare in third place with five bass for 20-7. Weights are stacked – just over 5 pounds separates first place from 20th – and with three days left in the competition it is still anyone’s event.

“I found two different areas (in practice) that had fish in it, but I never caught quality like this by any means,” Buck said. “Once I finally settled in today I got to see what was actually there and I caught them pretty consistently.”

Buck said that he caught around 15 keepers on Thursday, with a nice 6-pound, 6-ouncer coming right around noon.

“The tide definitely played a role in where I was starting and where I was fishing at,” Buck said. “I’m hoping I can go out there again and catch a bunch of fish. I got that big one in the afternoon. I had to go looking for it – it wasn’t in the same spot where I caught a limit. Hopefully I can get another big one like that tomorrow. Those big bites really go far.”

Buck mentioned that there were numerous other competitors fishing in the same areas.

“There are a lot of people fishing there, but hopefully we can all work around the area together and catch them,” he said.

Although second-place pro Ebare is much more used to fishing in southern states like Texas and Louisiana, he said that he felt comfortable with how the James River was setting up for him.

“It felt a little like home in how it sets up,” Ebare said. “The tide swings are much bigger here than they are in Louisiana, but once I figured out where I needed to be and how the fish were setting up, I settled in and knew exactly what to look for. I was at the right place at the right time today and was able to start running the tide, which is the key to all tidal waters. It doesn’t matter what you are doing as much as where you’re doing it.

“It was an all-around good day, and I’m thankful because I know you don’t get a big one like that every day,” he said. “I was happy I could catch some more solid fish to go with it, so I didn’t waste it. Historically on the James River, from what I’ve seen in past tournament results, consistency is the big thing, so I’m going into tomorrow as if I’m back to zero. On tidal fisheries, you can have 10 pounds as easily as you can have 20 because it’s all about timing.”

The tide also played a big role in how third-place pro angler Groh caught his fish.

“It started slow, I started where I had some really, really good bites in practice, but the tide wasn’t quite right,” Groh said. “I slid to where the tide was better and was able to get my first limit, but it only weighed 7 pounds. I knew when the tide went slack they wouldn’t bite, so I left. When the tide came back in, I went over the same spots I was catching small fish and they were all good ones.

Groh revealed that he caught all of his fish Thursday on a white Berkley Powerbait Buzz’n Speed Toad paired with a Berkley Fusion19 weighted frog hook.

“I went and checked some other spots for tomorrow and caught some that I probably shouldn’t have,” Groh said. “I feel confident that I’ll catch fish tomorrow. It just might not be 20 pounds again.”

The Top 20 pros after Day 1 on the James River are:

Ebare weighed in the heaviest fish on Thursday – a largemouth that totaled 7 pounds, 14 ounces – to win the $1,000 Berkley Big Bass bonus.

The four-day tournament, hosted by Richmond Region Tourism in cooperation with the Henrico Sports & Entertainment Authority, features a field of 154 of the world’s best bass-fishing professionals competing for a top award of up to $135,000. The tournament marks the fifth of six regular-season Pro Circuit events in 2022 and offers competitors a total purse of more than $850,000.

In Tackle Warehouse Pro Circuit competition, the full field of 154 anglers compete in the two-day opening round on Thursday and Friday. The Top 50 pros based on their two-day cumulative weight will advance to Saturday. Only the Top 10 pros, based on cumulative weight from the first three days, will continue competition on Championship Sunday, where weights will be zeroed and anglers will compete in a one-day shootout for the grand prize of up to $135,000, including the lucrative $35,000 Phoenix MLF Bonus for qualified anglers.

Anglers will take off at 6:30 a.m. ET each day from the Osborne Landing, located at 9530 Osborne Turnpike in Richmond. Weigh-ins will also be held at the landing daily beginning at 2:30 p.m. Fans are encouraged to attend the morning take offs and afternoon weigh-ins, and also follow the live on-the-water action all four days of competition online on MLF NOW! beginning at 7 a.m. ET at MajorLeagueFishing.com.

As part of the event, on Saturday, June 18 and Sunday, June 19, from Noon to 4 p.m., fans are invited out to the Major League Fishing Festival at the Osborne Landing. Hosted by Richmond Region Tourism, the event will feature fans meeting and getting autographs from their favorite pro anglers that compete on the Tackle Warehouse Pro Circuit. Children are welcome to visit the Kids Zone to meet Skye & Marshall from “PAW Patrol,” fish for live fish in the Kids Fishing Pond, show off their artistic skills at the coloring stations, and more. Vendor booths from MLF sponsors, food, prizes and giveaways, including a FREE Abu Garcia rod and reel combo for the first 50 high school or middle school anglers, are available to festival goers. On Saturday and Sunday, one lucky attendee will play for a brand new 2022 Toyota Tundra in the Bully Dog Pick ‘Til You Win game, with runner-up prizes of a new 70-inch 4K UHD Smart TV or a Bully Dog Performance Tuner. For more information on the Major League Fishing Festival, visit MajorLeagueFishing.com/Attend.

The MLF NOW! broadcast team of Chad McKee, Marty Stone and J.T. Kenney will break down the extended action on all four days of competition from 7 a.m. to 2:15 p.m. ET. MLF NOW! will be live streamed on MajorLeagueFishing.com and the MyOutdoorTV (MOTV) app.

The MLF Tackle Warehouse Pro Circuit Toyota Stop 5 on the James River Presented by PowerStop Brakes will feature live on-the-water coverage and a two-hour action-packed television show that will premiere on the CBS Sports Network in early September.