50 Top Professional Anglers from Tackle Warehouse Pro Circuit Head to Wisconsin to Compete in Season Finale for up to $235,000 and TITLE Champion 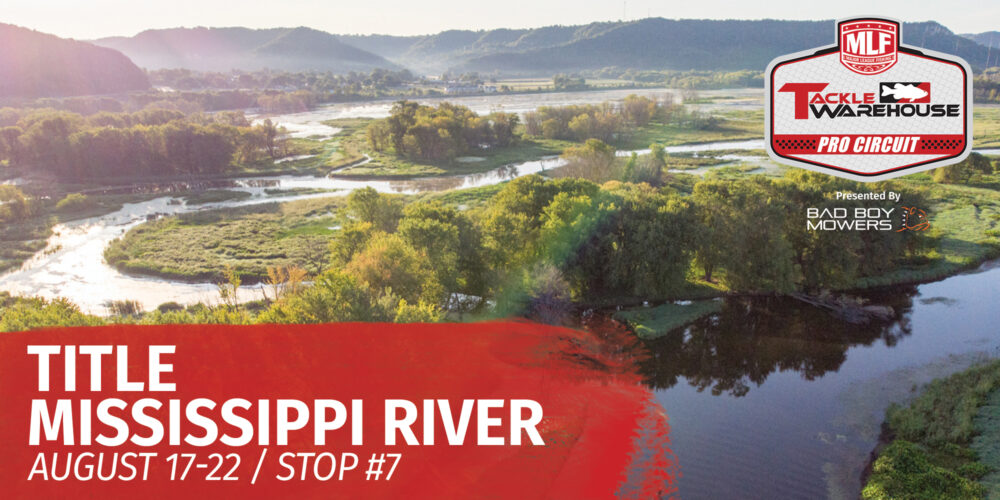 LA CROSSE, Wis. – The Major League Fishing (MLF) Tackle Warehouse TITLE Presented by Mercury – the Pro Circuit Championship, Presented by Bad Boy Mowers – is set to visit the Mississippi River and La Crosse, Wisconsin next week, Aug. 17-22. The six-day tournament will showcase the top 48 pros in the 2021 Pro Circuit standings, along with last year’s reigning TITLE champion and reigning Angler of the Year – all competing for a guaranteed check and a grand prize of up to $235,000.

While MLF has held more than 150 tournaments on the Mississippi River over the past 28 years – five of those tournaments at the Pro Circuit level – this will be the first MLF pro championship event held on the fishery.

The Pro Circuit last visited the Mighty Miss in July 2020, where hometown pro Tom Monsoor of La Crosse, Wisconsin, took home the win with a total weight of 54 pounds, 10 ounces. Monsoor finished 91st in the standings this season and did not qualify to compete in this event.

The 2021 TITLE, hosted by Explore La Crosse, will feature a hybrid tournament format. All 50 anglers are seeded into two groups of 25 – Group A & Group B, based on points earned in 2021 qualifying events – where they will compete in Qualifying Rounds over the first four days of the tournament. Group A will fish Day 1 and Day 3, and Group B will fish Day 2 and Day 4, with total weight determined by the cumulative weight of their biggest five-bass limit from both days.

The winner of each group will then advance directly to the Championship Round, while pros who finish in second to 10th place in each group will battle it out with zeroed weights in the Knockout Round. On the sixth day of the event, the Championship Round, weights will again be zeroed and the top eight pros from the Knockout Round, plus the two Qualifying Round winners will compete. The winner will be determined by the heaviest five-bass limit of the final round.

“We are thrilled to host the Tackle Warehouse Pro Circuit TITLE and have been anticipating the arrival of this event with great enthusiasm,” said A.J. Frels, Executive Director at Explore La Crosse. “We are excited for visitors and fans to experience the Driftless Region, where Ice Age glaciers left an untouched playground of bluffs, ravines, coulees and an incredible network of waterways.

“The La Crosse region is the perfect playground for outdoor enthusiasts. Once visitors have experienced our area, we know it will stay at the top of their list for fishing, hiking, hunting, canoeing, boating, kayaking or simply being outdoors.”

Mississippi River expert and Pro Circuit angler Matt Stefan of Junction City, Wisconsin said the fish should be fully into their summer patterns by next week and he expects the fishing to be good.

“Prior to the middle of July, the fish are scattered everywhere,” said Stefan. “Now that we are into August, they get into a true summer feeding mode and are more grouped up. At this point in the season, it’s not uncommon to find spots where you can pull up on a current break and catch 40 fish on 50 casts. The key, as always, is going to be catching 3-pounders. The Mississippi is a game of keepers – the more you catch, the better your chance of catching one of those 3-pounders.

While the Mississippi River has a reputation for being a frog haven in the summer, Stefan said there will most likely be a lot of other options being thrown during the event, including buzzbaits, walking topwaters and poppers, as well as swim jigs and swimbaits. He said he also expects to see anglers pitching and flipping Texas rigs and jigs, cranking, swinging football jigs and potentially even a Carolina rig.

Anglers will take off at 7 a.m. CT each day of competition from Veterans Freedom Park, located at 1 Clinton Street in La Crosse. Weigh-ins will also be held at the park daily at 3 p.m. The MLF NOW! broadcast team of Chad McKee, Marty Stone and J.T. Kenney will break down the extended action on all six days of competition from 7:30 a.m. to 2:30 p.m. Fans are welcome to attend the event or follow the action online through the MLF NOW! live stream and coverage at MajorLeagueFishing.com.

Along with the launch and weigh-in, fans and community members are invited to a Fishing and Outdoor Expo Saturday and Sunday, August 21-22 from 11 a.m. to 4 p.m. CT at Veterans Freedom Park, where fans can meet the pros and check out the latest in fishing and outdoor gear. The expo includes live music, great food, vendor booths from participating sponsors, activities for kids, giveaways and more.

The first 100 kids (10 and under) will receive a free rod and reel at the Expo on Saturday and Sunday and fans can register for a Jackson Kayak Coosa FD giveaway once per day, onsite at the Expo. The winner will be drawn after the final weigh-in on August 22. PAW Patrol’s Skye and Marshall will also be at the event with MLF pro Charlie Evans and will be available for photos. Appearance times may vary. Visit MajorLeagueFishing.com for updates and more details.

In addition to the launch, weigh-ins and Expo, youth 14 and under are also invited to attend a free Kid’s Fishing Derby on Sunday, Aug. 22, from noon to 2 p.m. at Copeland Park. Participants can bring their own fishing gear or use provided gear on a first come, first serve basis. Worms will be provided by DMF Bait Company. Participants can register online at MajorLeagueFishing.com.