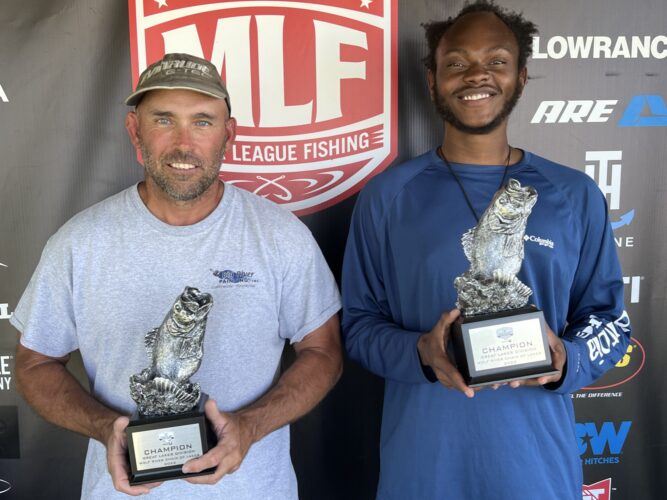 “I started off catching a few pretty quick,” Fitzpatrick said. “You know, just putting some in the boat. That always helps out mentally. I was just running around, hitting a bunch of areas and fishing fast.”

Fitzpatrick said he employed a swim jig and a buzzbait to cover water quickly and boated 20 to 25 bass during the course of the day, 15 of which were keepers.

“Around mid-day I got rid of a couple of 14-inchers I had and knew I had a little more than 15 pounds, so I knew I might have a shot at winning,” Fitzpatrick said. “I really felt like I needed to upgrade one more fish, though. I knew it would be close.”

It turns out Fitzpatrick, who calls the Mississippi River his home water, did not need to upgrade his weight, and the tournament trophy was his.

“This feels great,” Fitzpatrick said. “It feels a little bit better getting a win here than it does on my home water.”

Alex Standerfer of New London, Wisconsin, caught a bass weighing 4 pounds, 5 ounces – the heaviest of the event in the Boater Division – to earn the day’s Berkley Big Bass Boater award of $535.

Kyle Simonson of Appleton, Wisconsin, caught the largest bass in the Co-angler Division, a fish weighing in at 4 pounds, 7 ounces. The catch earned him the day’s Berkley Big Bass Co-angler award of $255.