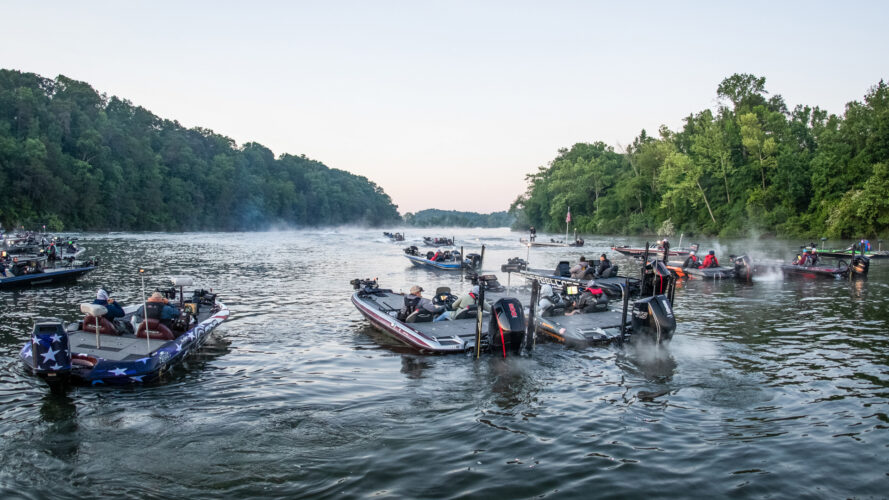 Mercury pro Miles Burghoff of Dayton, Tennessee, said he expects to see the fish in full spawning mode during the tournament.

“On Lake Chickamauga, the bass tend to wait until the water gets up to the reeds for the main wave of spawners, so for this event the majority of the guys that do well will be fishing shallow,” Burghoff said. “Chick doesn’t normally get good off-shore until the end of May, early June, so while there will still be some guys fishing offshore, they will be the minority.”

With temperature predictions in the mid-70s throughout the event, the Tackle Warehouse Pro Circuit pro said the fishery will be set up nicely for the shallow bite.

“I think we’ll see a lot of wacky rigs and stick baits like the Z-Man Zinkerz during the tournament, as well as swim jigs and some big swimbaits,” Burghoff said. “Guys could flip or pitch a little bit, but I honestly think the water is going to be about a foot too low by the time the tournament begins.

“As for off-shore, I expect to see crankbaits, big spoons and guys dragging jigs – just the usual Tennessee River players.”

Burghoff said while the event will be exciting, especially for anglers targeting fish on beds, he doesn’t anticipate big weights during the tournament.

“I think it’s going to take 14 ½ to 16 pounds to get into the Top 25 and around 18 pounds per day to win the event, just considering how tough the lake has been fishing,” Burghoff said.

While he spends most of the year traveling around the country on the Tackle Warehouse Pro Circuit, Burghoff said he is looking forward to the challenge the local Toyota Series event offers.

“The Toyota Series is a great opportunity for me to fish against the best anglers in the region,” Burghoff said. “On the Pro Circuit, we are generally competing on fisheries that we don’t fish often, so we all put our own spin on those bodies of water. However, at a Toyota Series event, you’re fishing against guys who live around those lakes and likely fish them very often – and they’re tough to beat. These regional events are extremely competitive and are a great opportunity to get out there and learn from the locals.”

Anglers will take off daily at 6 a.m. ET from Chester Frost Park located at 2318 Gold Point Circle North in Hixson. Weigh-ins will also be held at the park and will begin at 2 p.m. Fans are welcome to attend the event or follow the action online through the MLF NOW! weigh-in broadcasts and daily coverage at MajorLeagueFishing.com.