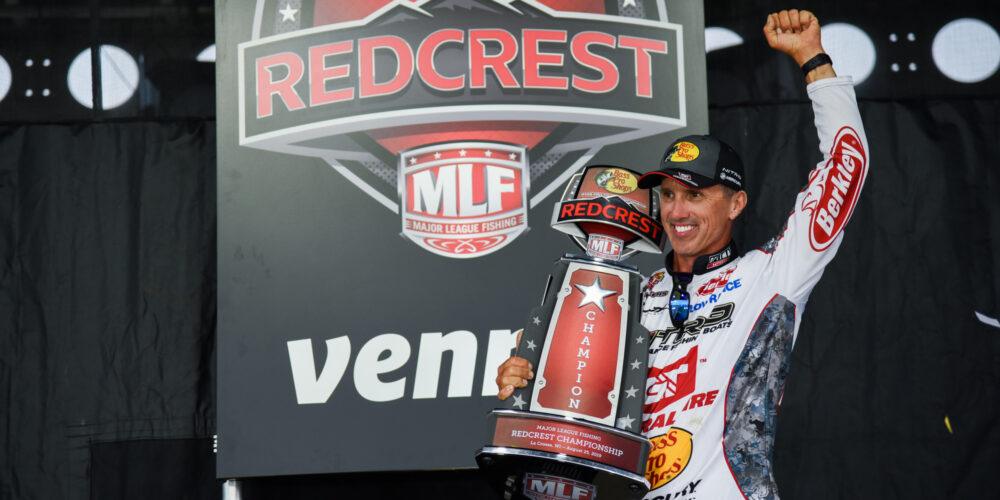 EUFAULA, Ala. – Major League Fishing’s (MLF) REDCREST 2021 presented by Old Wisconsin Sausage, the Bass Pro Tour championship, is set to visit Lake Eufaula and the Eufaula, Alabama area this week, Feb. 22-26, to crown the newest Bass Pro Tour champion. The five-day tournament, shot for television broadcast on CBS, the Discovery Channel and the Outdoor Channel, will showcase the top 40 Bass Pro Tour anglers from the 2020 season competing for the prestigious REDCREST Championship and the top prize of $300,000.

Originally scheduled to be held at Oklahoma’s Grand Lake O’ the Cherokees, MLF officials shifted REDCREST 2021 to Texas’ Lake Palestine in mid-December after the cancellation of the Outdoor Sports Expo that had been scheduled to be held in conjunction with the event. The event was again shifted late Thursday afternoon, as the winter storms, inclement weather, and uncertain conditions in Texas and the entire Southern region forced officials to explore all options before Ann Sparks and the Eufaula Chamber of Commerce stepped up in a big way.

“We are extremely grateful to Ann Sparks and the Eufaula Chamber, Mayor Jack Tibbs, Lakepoint State Park and the Eufaula community,” said Michael Mulone, MLF Senior Director of Events & Partnerships. “We were facing a very tough situation and they have welcomed us with open arms. We’ve held several successful events at Lake Eufaula in the past and we’re comforted knowing that we’re still going to be able to pull off our championship event this week on an absolute world-class fishery.”

“It wouldn’t be Major League Fishing without a curveball being thrown at us,” Bass Pro Tour angler Ott DeFoe said, who will be one of the 40 anglers competing this week. “I was very excited to fish at Lake Palestine, but with the weather conditions they have faced over the last week, it wouldn’t have been right. Lake Eufaula is a fantastic secondary option. I can’t believe everything came together as quickly as it did. I’m excited to get out there and compete for $300,000 and to try to become a REDCREST champion.”

“This event is going to be a lot of fun. Big championships where the top pros in the world can bring their different strong suits to the table and play them are special events,” said superstar pro Kevin VanDam of Kalamazoo, Michigan, who will also be competing in his first career REDCREST championship.

All 40 Anglers will compete on Days 1 (Monday) and 2 (Tuesday) of the event. After two days of competition, the field is cut to just the top 20 based on two-day total cumulative weight. The remaining 20 anglers are split into two groups – 10 compete on Day 3 (Wednesday) and 10 compete on Day 4 (Thursday). The top five anglers from each group based on total single-day weight will advance to the fifth and final day of competition (Friday), where weights are zeroed and the angler that catches the highest total weight on the final day will be crowned the REDCREST 2021 champion.

Attendance is limited to competing anglers, essential staff and media covering the event only. Fans are encouraged to follow the event online through the MLF NOW!®live stream and SCORETRACKER® coverage at MajorLeagueFishing.com

The MLF NOW!® broadcast team of Chad McKee, Marty Stone and J.T. Kenney will break down the extended action on all five days of competition from 7:45 a.m. to 4:30 p.m. MLF NOW!®  will be live streamed on MajorLeagueFishing.com. and the MyOutdoorTV (MOTV) app.

Television coverage of REDCREST 2021 presented by Old Wisconsin Sausage will be showcased across two two-hour episodes, premiering at 7 a.m. ET, July 3 on the Discovery Channel. A one-hour special episode of MLF Inside the REDCREST will premiere at 2 p.m. ET, Sunday, July 18 on CBS. New MLF episodes premiere each Saturday morning on the Discovery Channel, with additional re-airings on the Outdoor Channel and the Sportsman Channel. Each two-hour long reality-based episode goes in-depth to break down each day of competition.