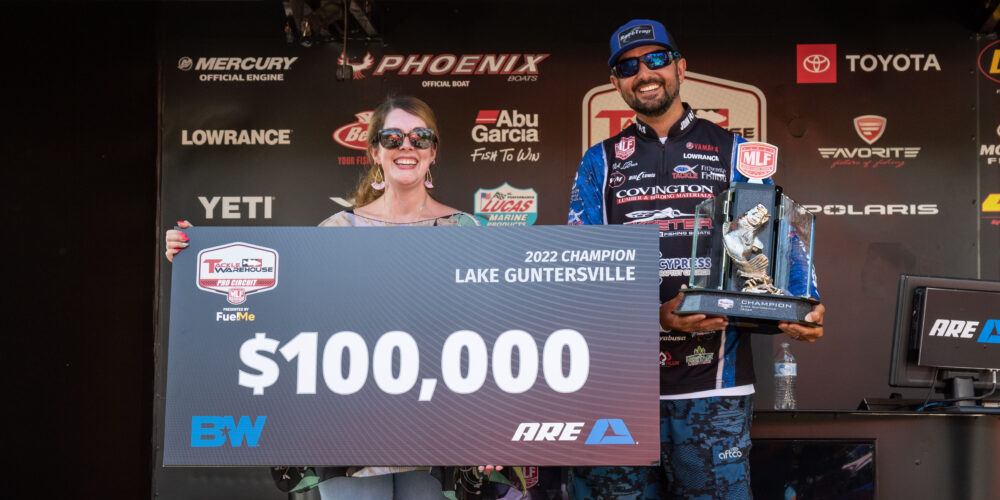 GUNTERSVILLE, Ala. – After going the first three hours of Championship Sunday without a single keeper fish, pro Nick LeBrun of Bossier City, Louisiana, finally reeled in his first fish of the day – a 7-pound Guntersville largemouth – to shake things up at the B&W Trailer Hitches Stop 4 on Lake Guntersville Presented by A.R.E. in Guntersville, Alabama. LeBrun then went on a 45-minute flurry to put together a solid limit, ending the day with 22 pounds, 15 ounces to take home his first Tackle Warehouse Pro Circuit win and earn the top payout of $100,000.

LeBrun sat in 44th place after Day 1 of the tournament, only weighing in 16 pounds, 15 ounces, before jumping to seventh place on Day 2 with a monster limit weighing 22-2. His momentum carried and continued to build throughout the event, ultimately ending on Championship Sunday with his biggest fish – and biggest limit – of the tournament. LeBrun’s final day total of 22-15 gave him a 2-pound, 6-ounce margin over Greeneville, Tennessee, rookie Nick Hatfield, who brought a limit to the scales weighing 20 pounds, 9 ounces, good for second place.

“It’s just been a phenomenal day. I feel so blessed,” LeBrun said. “I started in my main spot first thing this morning and the eelgrass was just out of control. I wasn’t even fishing – I was basically just raking grass with every cast and that started to spin me out a little. I knew where some more shallow stuff was, and some bream feeders and fry, so I decided to go hit that for a while. But even there, I just wasn’t seeing fish like I had been and was only catching small 10-inch fish.”

LeBrun said he spent an hour-and-a-half trying to force the shallow bite to work and it just wasn’t happening.

“At 10 a.m. I had zero fish and was feeling really discouraged,” LeBrun said. “I pulled back to my main spot to find the eelgrass had cleared out and we absolutely wrecked them for about 45 minutes. By 10:45, I had a solid sack of fish – I can’t ask for anything better than that.”

Because he had stacked up a quality limit early on, aided by the 7-pound kicker, LeBrun ended up going most of the day without culling.

“Most of my fish this week came from a main river ledge, in water about 30-foot deep,” LeBrun said. “I had a few key baits, including a 4½-inch Producer Swimbait, blue-crack-colored, with a homemade ¾-ounce head that I was throwing on a Fitzgerald 7’6” All Purpose Casting Rod Heavy with a 7:1 Fitzgerald Stunner Casting Reel, paired with 18-pound Sunline Super FC Sniper Fluorocarbon. That’s what the 7-pounder, and most of my big ones, were caught on.

“That setup got them fired up, but when they went cold I had another waypoint where I would slide up shallow around the back and throw a 10½-inch V&M J-Mag Worm on a ¾-ounce,  V&M Mega Shakey Head in a couple of different colors,” LeBrun said.

The momentous “turn-around” proved to be a theme for the Louisiana pro – during the tournament on Lake Guntersville – and in life in general.

On the stage at the weigh-in, LeBrun said, “Seven-pounders are awesome and getting a Top 10 is awesome, but that doesn’t compare to my relationship with Jesus Christ,” which was met with applause from the audience.

“The last time I held up a check for Major League Fishing, I wasn’t the same guy I am today,” LeBrun said. “The last time I stood on this stage and held up a trophy was at the 2018 All-American on Cross Lake, and that was a dark time in my life. There were a lot of things wrong, but shortly after that Jesus Christ redeemed me, and now I stand here giving Him all the glory – not myself, but Him.

“There’s nothing in life that’s too far gone with Him, so to stand here with my lovely wife Jolene by my side, and to be here with all of you, it really means a lot.”

The Top 10 pros at the B&W Trailer Hitches Stop 4 on Lake Guntersville finished:

Pro Lane Olson of Forest Grove, Oregon, had his weight disqualified, Sunday, as he violated Pro Circuit Rule No. 14 on the final day of competition, which states, “The use of braid or other line to attach a single stinger hook to a lure is allowed as long as the line is no more than 2 inches in length.” Olson was unaware of the rule and mistakenly attached a second stinger hook to his lure on Championship Sunday, therefore his weight for the day was disqualified. Olson finished the event in 10th place and earned a payout of $14,000.

The four-day Tackle Warehouse Pro Circuit Presented by Fuel Me B&W Trailer Hitches Stop 4 at Lake Guntersville Presented by A.R.E. was hosted by Marshall County Tourism and Sports. The event will premiere on the CBS Sports Network later this summer.

In Tackle Warehouse Pro Circuit competition, the full field of 156 anglers competed in the two-day opening round on Thursday and Friday. The Top 50 pros based on their two-day cumulative weight advanced to Saturday, then only the Top 10 pros, based on cumulative weight from the first three days, continued competition on Championship Sunday, where weights were zeroed, and the winner was determined by the heaviest weight from the final day of competition.