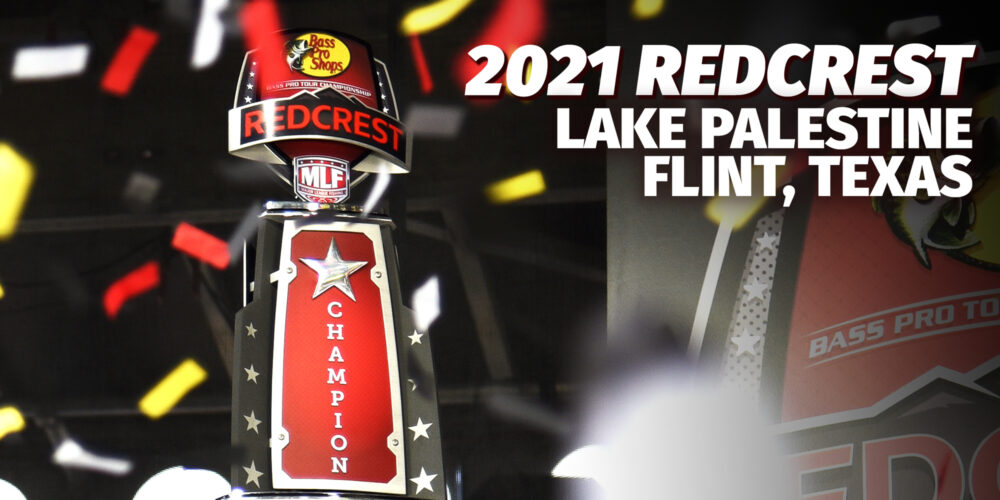 TULSA, Okla. – MLF announced today that REDCREST 2021, the MLF Bass Pro Tour Championship, has been shifted to Lake Palestine in Flint, Texas. Originally scheduled to be held February 23-27, 2021 in Tulsa, Oklahoma, the dates have also shifted slightly to February 21-25. REDCREST 2021 will showcase the Top 40 Bass Pro Tour anglers from the 2020 season competing for the prestigious REDCREST title and the top prize of $300,000.

The decision to move the event was made after numerous Bass Pro Tour anglers suggested a new fishery location for the championship tournament after MLF announced the cancellation of the Outdoor Sports Expo in Tulsa in late November. With no Expo taking place, MLF officials agreed to shift the event to Lake Palestine, an 18-mile long Texas reservoir known for its tremendous bass-fishing and the numerous 10-plus-pound largemouth that live throughout the lake.

The fishery is known for annually producing multiple bass that are recognized by the Texas Parks and Wildlife’s popular Toyota ShareLunker program.

“Grand Lake is an awesome fishery, but when we found out that MLF was open to the consideration of shifting REDCREST 2021, it was something that most of us were really excited about,” said Ott DeFoe, who won the Bass Pro Tour Stage Three event on Texas’ Lake Fork last season and will be making his second REDCREST appearance. “When we found out that we were moving to Lake Palestine, it was even better.

“Texas certainly has a special place in my heart. REDCREST 2021 is going to be a tremendous way to kick off the season and a really fun tournament for the fans to follow. We’re going to see some absolute giants caught in this one – we’re hitting it just right – and we will likely see quite a few records broken there.”

Setting the Stage for 2022 in Tulsa

In addition to the opportunity to feature the Championship event on an exciting fishery, the shift also made sense logistically, according to MLF Senior Director of Events & Partnerships Michael Mulone.

“It makes sense, from a business standpoint, to shift to Lake Palestine and save Tulsa and Grand Lake for REDCREST 2022,” Mulone said. “Grand Lake is a championship fishery, but when we postponed the Expo in Tulsa, we realized that we could do a better job of highlighting Grand Lake with the Expo component. The fact that this will be our inaugural Expo, in the home of Major League Fishing, we want to ensure we’re doing everything possible to not dilute the event in any way.

“We truly want to blow it out of the water next year and fully expect it to be the biggest show in town. We are grateful to our partners with the City of Grove, the Grove Area Chamber of Commerce and VisitTulsa that gave their blessings to shift the REDCREST 2021 tournament. We expect Lake Palestine and REDCREST 2021 to produce one of the most exciting tournaments in our company’s history.”

MLF announced in November that Tulsa and Grand Lake o’ the Cherokees will host REDCREST 2022, with the River Spirit Expo Square set to host the inaugural REDCREST 2022 Outdoor Sports Expo on March 25-27, 2022. Those dates remain unchanged.