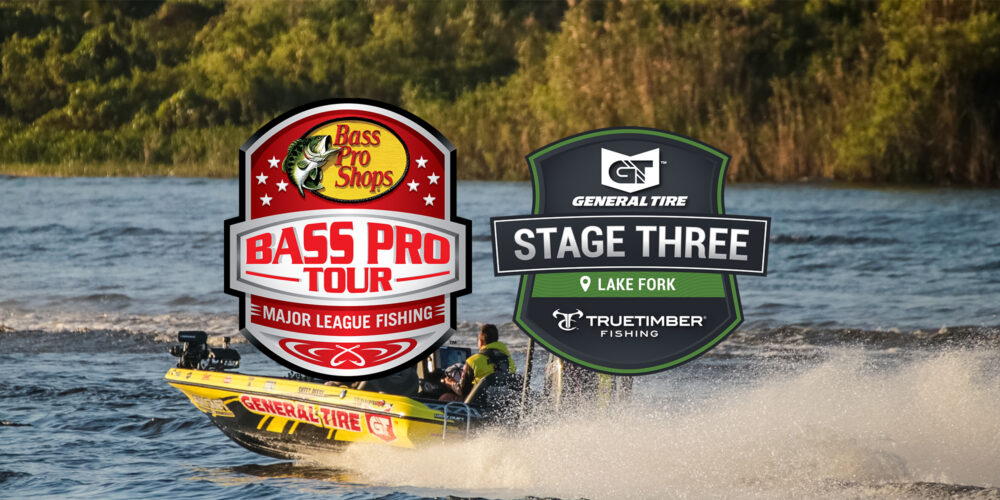 “We go to many fisheries with big fish, but any bite on Lake Fork can be a fish of a lifetime, weighing in the teens,” said Alton Jones, Sr., Texas-based MLF pro. “We are going to hit it just right, with warm weather and plenty of opportunities for anglers to fish strategically for pre-spawn fish and spawning fish, which will broaden the playing field for the competition.”

While known as the “big bass factory,” Lake Fork is a slot limit lake, meaning fish of a certain size (or “slot”) must be released and only smaller or larger fish can be harvested. Due to this limitation for traditional five-fish formats, Lake Fork is not a usual stop for professional-level bass tournaments; however, the MLF catch-weigh-and-immediately-release format makes the Bass Pro Tour a perfect fit for the fishery. In this innovative format, MLF anglers weigh fish in the 16- to 24-inch slot limit and contribute them to their total weight before releasing them immediately back where they were caught.

Anglers compete on Lake Fork during the Qualifying and Knockout Rounds (Days 1-5) before moving to the prestigious Lake Athens on Wednesday, March 18 for the Championship Round.

“The conservation-friendly MLF format allows us to have tournaments in places where we typically cannot,” said Dave Terre, Chief of Fisheries Management and Research for Texas Parks and Wildlife (TPW). “Lake Athens is one of those places – it’s a small lake, but it has been cranking out Toyota ShareLunkers over the past several years and we are looking forward to sharing that experience with the world.”

Major League Fishing will work with Texas Parks and Wildlife to properly document all Toyota Sharelunkers caught during the General Tire Stage Three presented by TrueTimber, including safely transporting all Legacy Sharelunkers weighing 13 pounds or more. Major League Fishing staff will assist pros with the transport to ensure they can continue to compete with minimal interruption. To learn more about the Toyota Sharelunkers program, visit TexasShareLunker.com.

Terre added that TPW loves the MLF format and is excited for the opportunity to showcase both lakes and their conservation efforts to a nationwide audience.

“A 10-boat championship shootout on the 1799-acre Lake Athens in mid-March with the best anglers in the world is like a Home Run Derby at the All-Star game,” said Mulone. “We look forward to showing off these exceptional fisheries to our audience, the largest in fishing.”

Major League Fishing will showcase the fishery and the region through their award-winning, live and linear programming. Each Stage of the Bass Pro Tour is broadcast live on the Major League Fishing app, MyOutdoorTV (MOTV), and MajorLeagueFishing.com, totaling more than 54 hours of original programming for Lake Fork and Lake Athens.

Micheal Rogge, President of Lake Fork Area Chamber of Commerce, told MLF there is much excitement from citizens in the Lake Fork area regarding the pros visiting and the exposure that MLF brings their destination.

“Lake Fork has been well known, but with the arrival of the MLF Bass Pro Tour, we can add another dimension to showcasing the abilities of Lake Fork both nationally and internationally,” explained Rogge. “The economic impact alone of MLF coming to our area brings new visitors, new money, and new opportunities, which is a huge benefit to our regional efforts.”

Fans can meet pros at the following events:

The Bass Pro Tour began in 2019 and features 80 of the best professional anglers in the world, including Kevin VanDam, Edwin Evers, Aaron Martens, Mike Iaconelli, Jordan Lee, and Skeet Reese. Each stage includes six days of competition using the Major League Fishing, catch-weigh-and-immediately-release format, where every bass over a variable minimum weight toward a cumulative weight total for the day. Variable minimum weights are determined by fishery, akin to a golf course handicap. Lake Fork and Lake Athens will feature a two-pound minimum weight.

The field of 80 anglers is divided into two groups of 40 to compete on days one through four in the Qualifying Round. The winners of each Group receive an automatic berth to the Championship Round and a minimum payout of $12,000. The anglers who finish in places two through 19 from each group in the Qualifying Round (38 total) advance to the Knockout Round on day five, which determines who will compete on that final day, the Championship Round, for the Stage Title and $100,000.