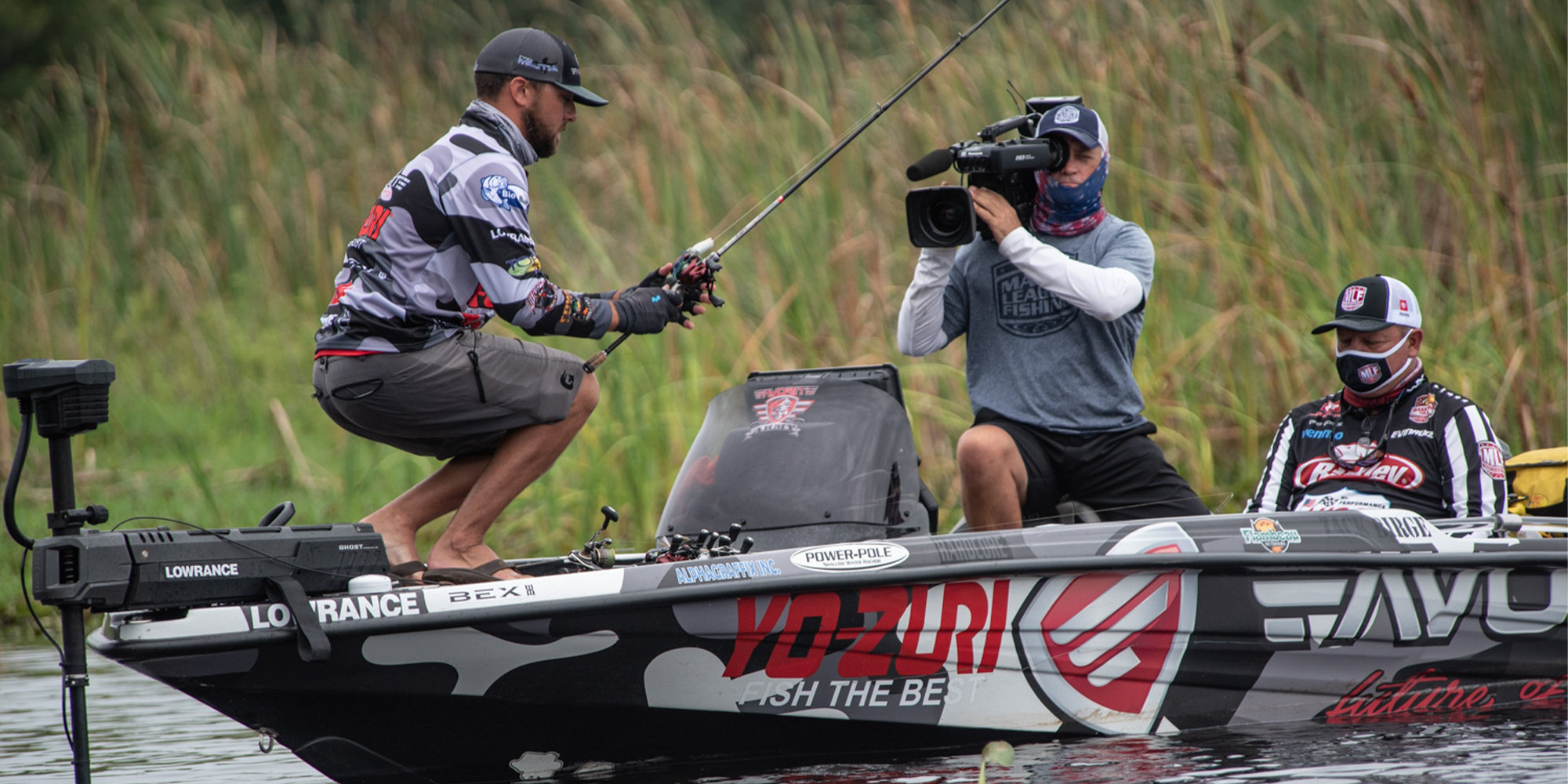 Zack Birge leads Group A after the first day of the Qualifying Round in the inaugural Toyota Heavy Hitters Presented by Venmo. Photo by Garrick Dixon

June 7, 2020 (Kissimmee, Fla.) – Major League Fishing (MLF) returned to live sports with their biggest event yet, Sunday on the Kissimmee Chain. Favorite Fishing pro Zack Birge leads Group A after the first day of the Qualifying Round in the inaugural Toyota Heavy Hitters Presented by Venmo, which boasts $753,000 in payouts. Brent Ehrler leads Group A for the Heavy Hitters big-fish bonus with an 8-pound, 6-ounce largemouth. The remaining 39 pros (Group B), including current Bass Pro Tour leader Ott DeFoe and Florida favorite Bobby Lane, take to the water Monday morning. The competition continues daily through Friday.

MLF resumed the 2020 Bass Pro Tour season after an 80-day, mid-season pause to minimize the spread of COVID-19. Due to the socially distant nature of competitive bass fishing and the unique MLF format, MLF moved forward with live competition while other professional sports remain paused. The MLF format, which features catch-weigh-and immediately release, eliminates a traditional weigh-in by weighing the fish on the boat and recording the cumulative weight in the proprietary SCORETRACKER® over the nine-hour day.

29-year-old Zack Birge led the field nearly the entire day after catching his first of 17 scorable bass in the first 11 minutes of regulation. Birge finished the day with 53 pounds, 7 ounces and a substantial, 17-pound lead over second place, which he said was his goal going into the round.

“I started off a little slow, but I ended strong,” said Birge. “I had two goals coming into today’s round: I wanted to have a little cushion and get some good points toward my REDCREST qualification. The only thing I missed was a big fish; but I caught a 5-8 so that’s good. It was a good day.”

Birge caught the majority of scorable fish on a Yo-Zuri 3DB Series 1.5 squarebill crankbait in gizzard shad, including his biggest fish of the day, which weighed in at 5 pounds, 8 ounces.  As the day wound down on MLF NOW!, MLF sports commentator JT Kenney highlighted his surprise that Birge was one of the only anglers to focus on the creeks and currents around the lake. When asked about his strategy, Birge says he goes against the grain by following the current and his roots.

“Many people from out of state, when they fish Florida, follow what they read or hear as the ‘right thing to do in Florida’,” commented Birge, who lives in Oklahoma. “But for me, since I started fishing Florida in 2015, I bring what I do in Oklahoma to Florida and that seems to work. Fish love current, so I go to the current and it worked again.”

MLF rookie Bryan Thrift marched his way to second place finish with 12 fish totaling 36 pounds, 7 ounces. Sticking with an offshore, vegetation strategy, Thrift changed up the bait to keep the fish biting racking up six on a worm in the third period alone.

“I was hoping they would bite a moving bait, something I could cover a lot of water with,” reflected Thrift. “It was about midway through the second period, I stopped being hard-headed and put the worm in the water, which resulted in quite of few bites.”

In addition to the traditional payout schedule based on finishing order, Toyota Heavy Hitters Presented by Venmo bonuses the angler for the biggest bass caught in each Group. The two-day Qualifying Rounds (June 7-10) will pay a $25,000 big bass bonus ($50,000 total). The Knockout Round on day five (June 11), will feature a $50,000 big bass bonus, while the Championship Round (June 12) will feature a $100,000 big bass bonus, on top of the Stage Title $100,000 prize. California pro Brent Ehrler leads the Group A race for the biggest bass with an 8-pound, 6-ounce largemouth. Ehrler caught the lunker on a six-inch Senko bait by Gary Yamamoto in black and blue color.

The Top Ten of Day One, Qualifying Group A finished as follows:

The competition continues Monday when Group B takes to the water for the first day of their Qualifying Round, which includes Florida pros Bobby Lane and Terry Scroggins, alongside the 2020 Bass Pro Tour Points leader Ott DeFoe. Aaron Martens remains sidelined due to ongoing cancer treatment and will not compete, which renders the field at 79 pros. While he will not earn points toward the 2020 Bass Pro Tour Points race, Martens’ fellow anglers did vote that he will receive an 80th place prize, $4,000.

Pending no weather delays, the day begins with launch at Big Toho Marina, Kissimmee, Fla., 6:15 a.m. ET before lines in at 7:00 a.m. Period 1 ends at 9:30 a.m. Period 2 spans 9:45 a.m. until 12:15 p.m. Period 3 begins at 12:30 p.m. and lasts until day’s end at 3:00 p.m. The General Tire Takeout show airs approximately 3–4 p.m. from the water. Fans can catch all the action every day of competition on MLF NOW! live stream on MajorLeagueFishing.com or download the MLF app for your Apple or GooglePlay device or on MyOutdoorTV (MOTV).