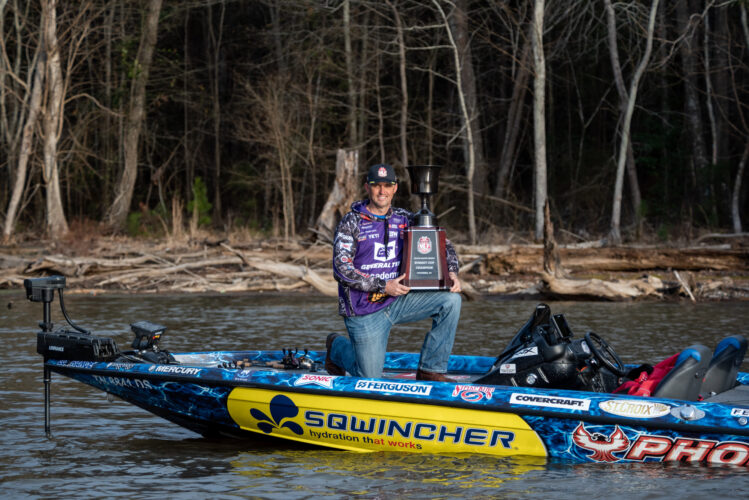 “It wasn’t pretty, but I got it done and I’ll take it however I can get it,” Robinson said in his post-game interview. “It’s still kind of a little surreal. I live about an hour and a half from here, so I’ve got a little bit of knowledge about Lake Murray. But I’ve seen it so many times before where you think you know what to do and try to fish that way and it can bite you. I really tried to fish this event open-minded and let the fish tell me what they were doing, and I think that was the biggest key in me getting it done.”

Robinson credited just two baits as being crucial to his success.

“The two baits that got it done for me this week was a homemade flat-side crankbait and a standard green pumpkin jig with a twin tail trailer on it,” Robinson said. “I threw the crankbait down the sloping gravel banks and wound it with a medium retrieve. Then, when I would come up around the boat docks with a little bit of cover on them, I’d reach for the green pumpkin jig and flip it in there and just work it through the cover as slow as possible.”

Overall, there were 43 bass weighing 105 pounds, 2 ounces caught by the final eight pros during the Championship Round of competition on Lake Murray.

Fukae caught the Berkley Big Bass of the day – a chunky 4-pound, 2-ounce largemouth that came on a shaky-head rig in Period 3.

The 2021 Wiley X Summit Cup Presented by B&W Trailer Hitches was hosted by Capital City/Lake Murray Country and premiered on the Outdoor Channel as six, two-hour original episodes each Saturday afternoon debuting on May 15, 2021, and running through June 19, 2021.

The event was shot over six days in early February 2021, in Columbia and featured 30 MLF pro anglers competing in different areas each round on Lake Murray. The areas are unknown to the anglers – they do not learn where they are competing until they arrive to the launch ramp each morning of competition.