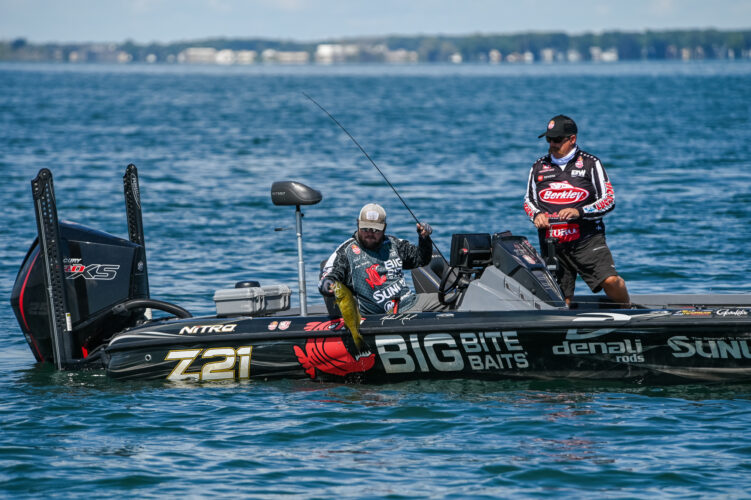 The six-day event, hosted by Macomb County, St. Clair Shores and the Detroit Sports Commission, showcases the 80 top professional bass-fishing anglers on the planet competing for a purse of $805,000, including a top cash prize of $100,000 to the winner. The tournament is live streamed each day at MajorLeagueFishing.com and the MOTV app and also being filmed for broadcast later this fall on the Discovery Channel.

The 40 anglers in Group A will now have the day off on Saturday, while the 39 anglers competing in Group B will begin their first day of competition. Group A will resume competition on Sunday.

“It was a heck of a day. It’ll be interesting to see if I can get back our here on Sunday or not,” Neal said, pondering the weather forecast. “If I can’t, I’m going to have to try to come up with a different plan to try to win the round.”

Neal spent pretty much his entire day fishing the same general area – a spot that he described as a big grass flat with a few irregularities – using multiple different baits and techniques. In Period 1, Neal relied on a drop-shot rig and boated six bass. In Period 2, he mixed a jerkbait into his repertoire and along with the drop-shot added another 10 scorable bass. In Period 3, Neal caught fire with a medium-diving crankbait and another 20 scorable bass in the period.

“Whenever it is calm enough to fish, I’m all in on the area that I fished today,” Neal added. “There are tons of fish there, but I don’t know how long they’ll stay, or if the wind will move them or what. We’ll have to see what happens. Regardless, today has been a really fun day.”

Straight off of his two back-to-back Bass Pro Tour victories, second-place pro Jacob Wheeler maintained his historic pace and had another great day on the water Friday.

“It was another incredible day,” Wheeler said. “I stayed on them all day long. It was great to have another 100-pound day, but we’ve still got a lot of work left ahead of us. It’s a solid start, though. And I’ve got a chance to win the round, and that’s really all that you can ask for after Day 1.”

The 40 Anglers in Group A compete in their two-day qualifying round on Lake St. Clair on Friday and Sunday – the 40 anglers in Group B on Saturday and Monday. After each two-day qualifying round is complete, the anglers that finish in 2nd through 20th place from both groups advance to Tuesday’s Knockout Round, while the winner of each group advances directly to Wednesday’s Championship Round. In the Knockout Round, weights are zeroed and the remaining 38 anglers compete to finish in the top 8 to advance to the Championship Round. In the final day Championship Round, weights are zeroed and the highest one-day total wins the top prize of $100,000.

Anglers will take off from the 9-Mile Ramp, located in St. Clair Shores, at 8 a.m. ET each day of competition. With strong winds being forecast for Saturday, Bass Pro Tour Tournament Director Aaron Beshears has decided to allow tournament competitors to trailer their boats. Anglers must remain at the 9-Mile Boat Ramp until 8 a.m. and then will be allowed to depart to the desired launch ramp of their choosing.

The General Tire Takeout ceremonies will also be held at the Launch Ramp, beginning at 5 p.m. each day. Fans are welcome to attend all takeoff and takeout ceremonies and also encouraged to follow the event online throughout the day on the MLF NOW!® live stream and SCORETRACKER® coverage at MajorLeagueFishing.com.

As part of the event fans will also be treated to the Bass, Brews & BBQ Festival at Blossom Heath Park in St. Clair Shores, from noon to 9 p.m. on Saturday and Sunday. The festival is a chance for fishing fans to meet their favorite Bass Pro Tour anglers, enjoy food and beverages from local food truck and St. Clair Shores Micro Breweries, watch the on-the-water action at the MLF watch party, shop at numerous MLF sponsor and local vendor booths, and enjoy live concerts from local musicians each day. For more information on the Bass, Brews & BBQ Festival hosted by Macomb County, visit MajorLeagueFishing.com.

The CarParts.com Stage Seven at Lake St. Clair Presented by Covercraft features anglers competing with a 2-pound minimum weight requirement for a bass to be deemed scorable. Minimum weights are determined individually for each competition waters that the Bass Pro Tour visits, based on the productivity, bass population and anticipated average size of fish in each fishery.

The MLF NOW!® broadcast team of Chad McKee, Marty Stone and J.T. Kenney will break down the extended action on all six days of competition from 8:45 a.m. to 5:30 p.m. ET. MLF NOW!®  will be live streamed on MajorLeagueFishing.com and the MyOutdoorTV (MOTV) app.

Television coverage of the CarParts.com Stage Seven at Lake St. Clair Presented by Covercraft will premiere at 7 a.m. ET, Nov. 13 on the Discovery Channel. New MLF episodes premiere each Saturday morning on the Discovery Channel, with additional re-airings on the Outdoor Channel and the Sportsman Channel. Each two-hour long reality-based episode goes in-depth to break down each day of competition.