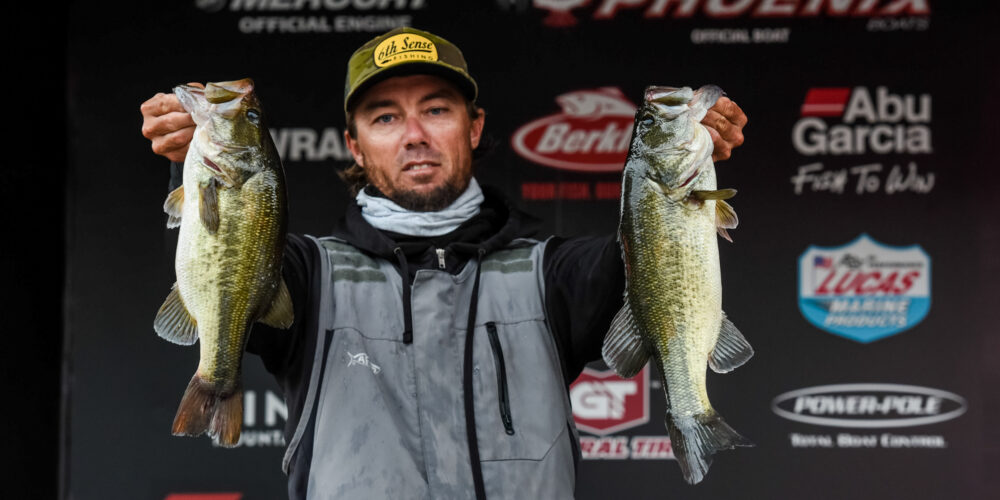 COUNCE, Tenn. – Pro Mikey Keyso of North Port, Florida, crossed the stage Friday with a five-bass limit weighing 15 pounds, 4 ounces to take the lead after Day 2 of the Toyota Series Championship Presented by Guaranteed Rate at Pickwick Lake in Counce, Tennessee. Keyso’s two-day total of 10 bass weighing 32 pounds, 14 ounces gives him a 15-ounce lead over pro Chris Digino of Dallas, Texas, who brought 13 pounds, 7 ounces to the scale for a two-day total of 31-15, good for second place.

The championship event, hosted by the Hardin County Convention and Visitors Bureau, features 198 pros and co-anglers from around the world, competing for a top cash award of up to $235,000. The field is now cut to just the top 10 pros and Strike King co-anglers as the event heads into the final day of competition in the no-entry-fee Toyota Series Championship, the culmination of the 2021 Toyota Series Presented by A.R.E. season.

Keyso began Day 2 in third place, continuing his work on a ¼-mile stretch of hydrilla with a punching rod and a frog to quickly move into the top spot. Keyso said his spot above the Natchez Trace Bridge is the only place he’s found both numbers and quality fish and said he plans to continue that run on Saturday.

“There’s a ton of shad, bluegill and bass in there for whatever reason,” said Keyso. “It’s got current coming through it and deeper grass than anywhere I’ve found and it’s right off the river channel. I think they just come in, do their thing and hang out. When they’re ready to eat they start chomping.

“I spent basically my whole time there today. I thought I had 12 pounds all day, so I was really trying to get a big bite and I sore-mouthed a lot of 2½-pounders. I don’t know what’s left in there, but I guess we’ll find out.”

Weighing a few fish on a frog and a few from punching on Day 1, Keyso said he caught some fish punching early, but capitalized on a strong frog bite later in the day to help cull up to his 15 pounds today.

“There were way more boats in there than I was hoping for today, but I still got to hit my little section so it worked out,” said Keyso. “I went in behind some guys when they left and caught all of them on the frog in the afternoon. Usually, my big, big ones come from flipping, but today everything I weighed-in came on a frog.”

The top 10 pros that advanced to the final day of competition on Pickwick Lake are:

The top 10 Strike King co-anglers that will fish the final day on Pickwick Lake are:

The final 10 pros and Strike King co-anglers will take off Saturday at 7 a.m. CT from Pickwick Landing State Park, located at 120 Playground Loop, in Counce. Saturday’s Championship weigh-in will also be held at the park and will begin at 3:15 p.m. Outdoor vendors will be onsite prior to weigh-in on Saturday from 11 a.m. to 3 p.m.

Fans are welcome to attend the event or follow the action online through the “MLF Live” weigh-in broadcasts and coverage at MajorLeagueFishing.com. The 2021 Toyota Series Championship Presented by Guaranteed Rate will premiere on the Outdoor Channel at 5 p.m. ET on Jan. 15, 2022, with additional airings to follow on the Sportsman Channel.

The full field of anglers competed on Days 1 and 2 of the event, with the top 10 pros and top 10 Strike King co-anglers based on cumulative weight from the first two days continuing to the third and final day. The 2021 Toyota Series champions will be determined by the heaviest three-day total weight.

The 2021 Toyota Series Championship features the top 25 pros, top 25 Strike King co-anglers and tournament winners from each of the six divisions; the top 12 pros and 12 co-anglers from the Wild Card division; the highest finishing boater and co-angler from each of the six Phoenix Bass Fishing League Presented by T-H Marine Regionals and the Wild Card at the All-American; the top three teams from the College Fishing National Championship; High School Fishing National Champions; TBF National Champions; and MLF International champions from Canada, Italy, Korea, Mexico and Zimbabwe.