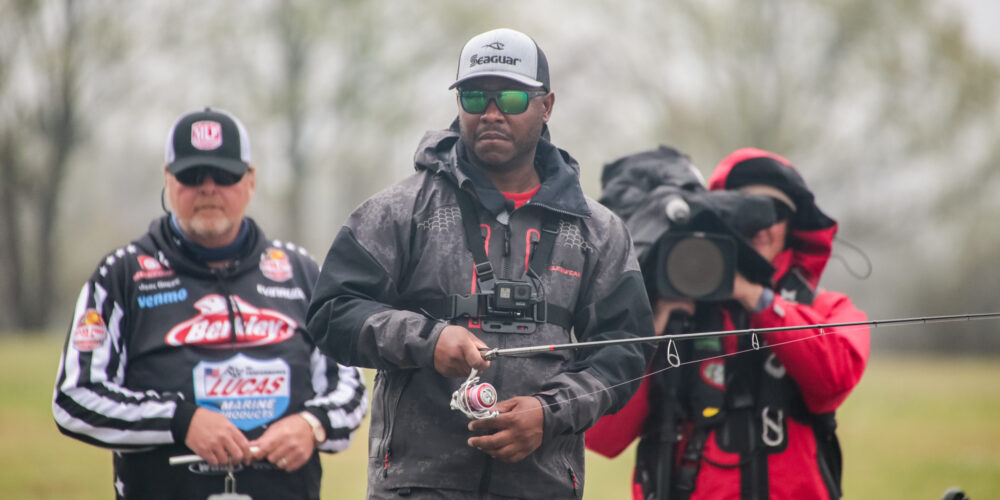 March 13, 2020 (LAKE FORK, Texas) Major League Fishing (MLF) shined a bright light on a nearly dark sports world with the Bass Pro Tour on Lake Fork, Texas. At the end of Day 1, 39-year-old Mark Daniels, Jr. led the field after catching 84 pounds, 15 ounces, Jason Christie emerged from zero to hero by catching the largest bass in the history of MLF, and the field of 40 managed to catch a cumulative total of 1649 pounds in three 150-minute periods. With 25 bass weighing in at 6 pounds or more, Lake Fork and MLF pros combined on Day 1 to bring a mid-March madness in competitive bass fishing. The six-day competition continues Saturday, March 14th at 10 a.m. when Group B takes to the lake in search of the coveted championship berth.

Jason Christie arrived in Texas with only five bass total after two Stages of the Bass Pro Tour. The Oklahoma-native was unable to catch any scorable bass in his first three days of competition throughout Lake Eufaula and Lake Okeechobee. Christie shook the curse with a 2-pound, 10-ounce bass 21 minutes into Period 1 before breaking the MLF league and Bass Pro Tour records with a 10-pound, 4-ounce largemouth in Period Two.

“What a day,” exclaimed Christie after lines out. “The first period with 12 pounds, I thought was my best stuff. But we called an audible, and I was fortunate enough to figure something out.”

Mark Daniels, Jr. (MDJ to fans and friends) took an early lead in Period 1 with 12 scorable bass totaling 38 pounds, 1 ounce. Leveraging a small area with a large pool of fish, Daniels expanded his lead in Period 2 with another nine scorable bass and 25 pounds. A resident of Tuskegee, Alabama, MDJ has three major tour wins in his career and 16 Top 10s.

“Excellent day, no complaints,” said Daniels. “I came out and fished hard; you never know what’s going to happen. I went into this spot looking for a couple of bites and it just blew my mind how many fish kept coming into the area. Eighty-four pounds… that’s a good day!”

By the end of the day, Daniels lead had shrunk to 12 pounds, 3 ounces over Jeff Sprague who’d leapt into second place with a five-fish, 14-pound, 7-ounce run in the last hour of Period 3. Mark is sponsored by Bill Lewis and Favorite Fishing, among others.

Sprague, who claims Fork as his “home lake,” opened Day 1 with a 3-pound, 12-ounce bass six minutes into competition. His biggest fish of the day also came in Period 1 weighing in at 6 pounds, 5 ounces. It was the third period, 11-fish run that added another 33 pounds to Sprague’s total and moved him from 27th to second place by lines out.

“I was really nervous about fishing my own lake,” said Sprague. “I know how the home-lake curse comes back to get you sometimes, and I really thought after my day of practice that it was going to come – and it still may. But we had a phenomenal day of fishing and I’m very happy with where I’m sitting in second place for the day.”

Lake Fork, known as the “Big Bass Factory” thanks to a protective slot limit, prevents many pro tournaments from using its field of play. The Major League Fishing conservation-friendly, catch-weigh-immediately-release format fits perfectly with Texas Park and Wildlife (TPW) lake management strategies, which include the Toyota ShareLunker program.

The Top 10 of Day One, Qualifying Group A finished as follows:

The competition continues Saturday when Group B takes to the water for the first day of their Qualifying Round, including Stage One and Two winners Jacob Wheeler and Jacob Powroznik and Heavy Hitters leader Jordan Lee. The weather forecast suggests thunderstorms may hinder the competition throughout the day. Bass Pro Tour Tournament Director Aaron Beshears will consider safety over competition every time.

“We continuously monitor weather on the entire body of water to determine the safest situation for the anglers and MLF staff,” said Beshears.

Fans can catch all the action every day of competition on MLFNOW! live stream on MajorLeagueFishing.com or download the MLF App for your Apple or GooglePlay device or on MyOutdoorTV (MOTV).