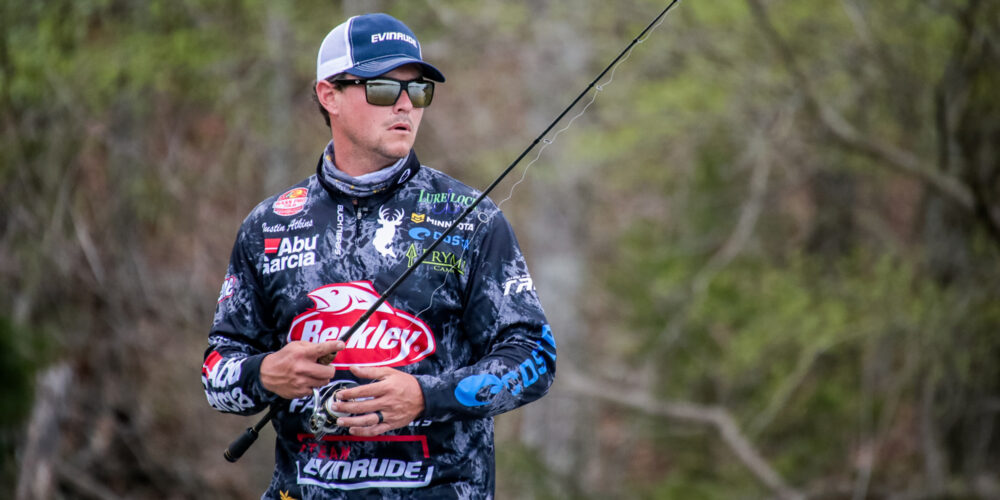 March 14, 2020 (Lake Fork, Texas) — Forty pro anglers (Group B) competed on Lake Fork in the Bass Pro Tour General Tire Stage Three Presented by TrueTimber. Justin Atkins broke the record for the largest bass caught in Major League Fishing and Bass Pro Tour history less than 24 hours after Jason Christie set it. Brandon Coulter led the field for much of the day only to slip into second place in the last seven minutes of the day. Michael Neal came from behind in Period 3 with a 35-pound, 10-fish run to end the day in first place. Group A returns to the water Sunday for their second and final day of the Qualifying Round; the bottom 20 will be eliminated.

Alabama-resident Justin Atkins gave himself a belated 30th-birthday present on Lake Fork today by catching the largest bass in the history of both MLF and the Bass Pro Tour. Weighing in at 10 pounds, 8 ounces — a personal best for Atkins — this fish beat Christie’s catch by 4 ounces, less than 24 hours later.

“Look at this guy,” exclaimed Atkins moments after he calmly set the hook in a fashion resembling the experience of a pro twice his age.

“It will not last a day or two,” said Christie, in an interview late Friday after catching the first record-breaker of this Stage. “I’m looking forward to getting back out there.”

Brandon Coulter took over the lead from Dave Lefebre early in Period 2 thanks to a steady stream of significant catches, including his big bass of the day weighing in at 9 pounds, 5 ounces with 45 minutes left in the second. 49-year-old Coulter looked like he would end the day in first place until fellow Tennessean Michael Neal rallied, rising into the Top 10 with a 10-fish, 35-pound, 10-ounce run in Period 3. With seven minutes remaining on the day, Neal caught a 3-pound, 8-ounce largemouth to take the lead by one pound.

“Sneaky Mikey,” commented Coulter as the clock wound down to lines out for the day. “Congratulations Michael; I wanted to win that round bad. We had a good day and I will be back out on Monday working to win and skip the Knockout Round.”

The competition continues Sunday when Group A returns to the water for their final day of the Qualifying Round. Mark Daniels, Jr. is currently in the lead with 84 pounds, 15 ounces. Texas pro Jeff Sprague sits in second place 12 pounds behind Daniels. The angler with the highest two-day cumulative total wins and the bottom 20 anglers will be eliminated. The weather forecast suggests thunderstorms may hinder the competition midday. Bass Pro Tour Tournament Director Aaron Beshears will consider safety over competition every time.

“We continuously monitor weather on the entire body of water to determine the safest situation for the anglers and MLF staff,” said Beshears.

The Bass Pro Tour began in 2019 and features 80 of the best professional anglers in the world, including Kevin VanDam, Edwin Evers, Aaron Martens, Mike Iaconelli, Jordan Lee, and Skeet Reese. Each stage includes six days of competition using the Major League Fishing, catch-weigh-and-immediately-release format, where every bass over a variable minimum weight, which is 2 pounds on Lake Fork for Stage Three, toward a cumulative weight total for the day.  Variable minimum weights are determined by fishery, akin to a golf course handicap. The field of 80 anglers is divided into two groups of 40 (Groups A and B) to compete on days one through four for the Qualifying Round. The winners of each Group earn an automatic berth to the Championship Round. The anglers finishing in places 2-20 from each group in the Qualifying Round (40 total) advance to the Knockout Round on day five (Tuesday), which determines who will compete on that final day, the Championship Round (Wednesday), for the Stage title and $100,000.