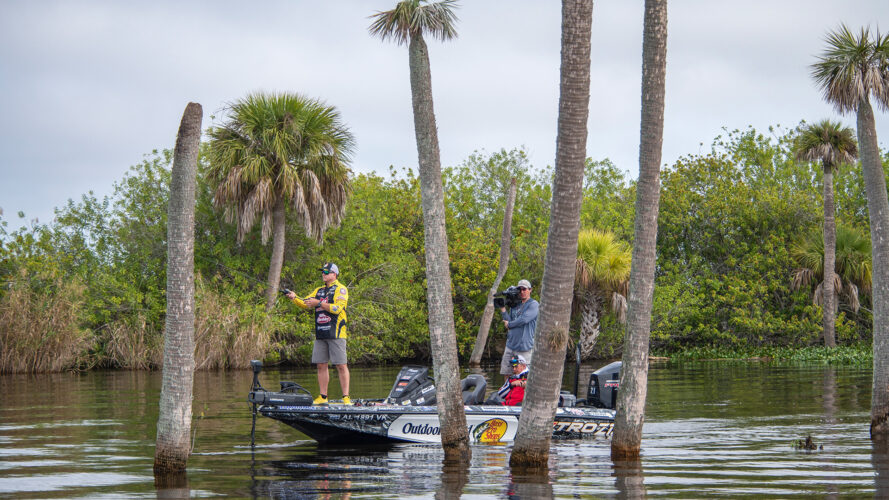 The Space Coast is a familiar destination for MLF, as the East Coast of South Florida played host to the now-defunct 2018 Major League Fishing World Championship, which showcased the top 12 anglers from that season’s MLF Cup events. That event was won by Louisiana’s Greg Hackney. As anglers battled a strong north wind on the final day of competition, Hackney ducked behind a levee on Kenansville Lake’s north end and went to work flipping mats to catch 32 pounds, 6 ounces of largemouth bass and earn the victory. Pro Skeet Reese of Auburn, California, finished fourth in that 2018 event, and was among the 24 competitors that competed again this past week.

“The Space Coast is a fishing paradise with the availability of freshwater, saltwater, surf, and deep-sea fishing opportunities. We are excited to have Major League Fishing here showing some of our top fishing spots to their viewers including new Headwaters Lake, the local trophy largemouth bass fishery. It’s unlike any other freshwater lake in the U.S.,” said Space Coast Office of Tourism Executive Director Peter Cranis.

The six-episode, two-hour series will feature professional anglers visiting the Space Coast area to compete over six days of competition on either Kenansville Lake (Jurassic Park), Lake Garcia, Stick Marsh, and for the first time ever, Fellsmere Reservoir (Headwaters Lake). The anglers do not learn where they are competing until they arrive at the launch ramp each morning, creating a reality-based television episode that showcases how the top anglers in the world break down new and unfamiliar waters.

“We had such a successful event when we were last here in 2018 that it really made returning for our Summit Cup championship a no-brainer,” said Michael Mulone, Senior Director of Events and Partnerships for MLF. “From the amazing fishing to the beautiful settings and scenery, to the community and people that we work closely with at the Space Coast Office of Tourism – all of them play a huge role in creating a fantastic television program for our national audience. It’s been a great week in Florida and we’re already looking forward to when we return.”

The MLF Wiley X Summit Cup Presented by B&W Trailer Hitches, hosted by Florida’s Space Coast Office of Tourism, will air on the Outdoor Channel as six, two-hour original episodes each Saturday afternoon starting April 2, 2022, airing from 2 to 4 p.m. EDT. The full television schedule can be found at MajorLeagueFishing.com/tv-schedule.

Florida’s Space Coast was named one of National Geographic’s Best of the World top 25 destinations on the rise for 2021. Florida’s Space Coast is home to Orlando’s closest beaches, 35 miles to the east, stretching 72 miles along the coastline, and is the East Coast Surfing Capital. Guests can discover the beauty of nature in more than 250 square miles of wildlife refuge and the Indian River Lagoon. Launches are visible across the county from NASA’s Kennedy Space Center, the only location in America where astronauts launch into space. Brevard Zoo was voted one of the top 5 zoos in North America by USA Today’s 10Best readers in 2020, and Orlando Melbourne International Airport was ranked North America’s Most Scenic Airport and ranked in the top 5 worldwide for 2020 by PrivateFly.com.