Neal Tops Qualifying Round of REDCREST 2022 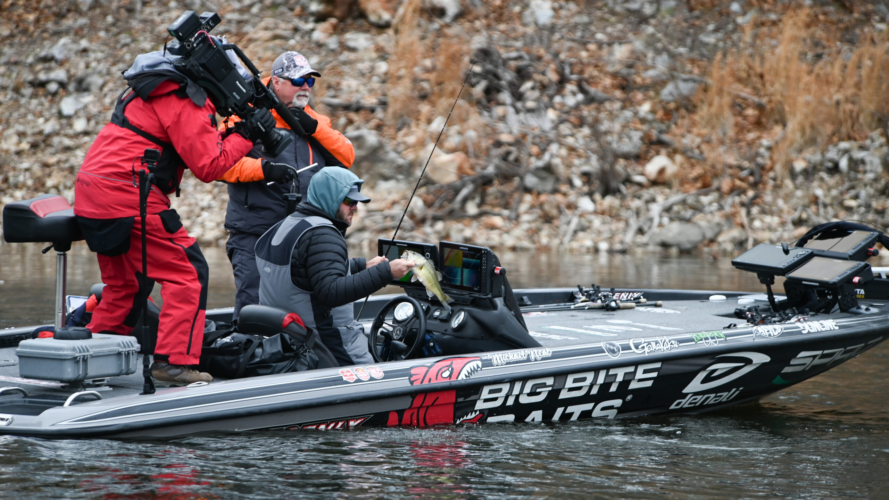 TULSA, Okla. – Bass Pro Tour angler Michael Neal of Dayton, Tennessee, weighed in a two-day total of 20 bass weighing 57 pounds, 7 ounces to win the Qualifying Round of REDCREST 2022 presented by Costa, the Bass Pro Tour championship, on Grand Lake O’ the Cherokees. Neal narrowly edged out two Oklahoma favorites – Talala’s Edwin Evers, who weighed in 17 bass for 55-8 to end the round in second place, and Blanchard’s Zack Birge, who boated 15 scorable bass for 47-8, good for third.

Link to Hi-Res Photo of Qualifying Round Winner Michael Neal

The field is now cut to 20, and weights are zeroed as competition moves into the Knockout Round. A field of 10 anglers (Group A) will compete on Friday and the remaining 10 anglers (Group B) will compete Saturday. The top five anglers from each day advance to the fifth and final day of competition, Championship Sunday. The five-day event, hosted by Tulsa Regional Tourism, features anglers competing for a total purse of $730,000, including a top cash prize of $300,000 to the winner.

“Well, the top of the leaderboard is a good place to be,” said Neal, who is competing in his third career REDCREST championship and finished second in the event last year. “I would have rather finished in second or third, because that would mean I would be fishing tomorrow. But I’m going to enjoy my day off tomorrow and get ready to get back out there on Saturday.

“Today was totally unexpected – I totally changed from yesterday,” the Tennessee pro said. “Yesterday was all about cranking. Today was all about finding the suspended fish that were out chasing bait. I found one little area that had a lot of fish on it. I caught them on a Damiki rig, using a 3/8-ounce Big Bite (Baits) Swimmer head with a ¾-inch Big Bite (Baits) Jerk Minnow.”

Although Neal spent his day chasing the suspended fish chasing bait, it was mainly because he wanted to conserve his other areas for the Knockout and Championship Rounds.

“I was worried about those fish,” Neal said. “I wasn’t sure I could go down there and catch one. They were there, and they’ve been there since practice started (last Sunday). So, I feel like one extra day won’t hurt them too bad and hopefully they’re still there Saturday and Sunday for the Championship Round.”

The Top 20 pros that made the Qualifying Round cut and will advance in competition on Grand Lake are:

Finishing in 21st through 41st are:

Favorite Fishing pro Dustin Connell of Clanton, Alabama, won Thursday’s $1,000 Berkley Big Bass Award, weighing in a 5-pound, 12-ounce largemouth during Period 3. Berkley awards $1,000 to the angler that weighs the biggest bass each day, and a $1,000 bonus to the angler who weighs the largest bass of the tournament.

All 41 Anglers competed on Days 1 (Wednesday) and 2 (Thursday) of the event. After two days of competition, the field is now cut to just the Top 20 based on two-day total cumulative weight. The remaining 20 anglers are split into two groups – 10 in Group A compete on Day 3 (Friday) and 10 in Group B compete on Day 4 (Saturday). The top five anglers from each group based on total single-day weight will advance to the fifth and final day of competition (Sunday), where weights are zeroed and the angler that catches the highest total weight on the final day will be crowned the REDCREST 2022 champion.

The 10 anglers that will compete in the Group A Knockout Round on Friday are:

The 10 anglers that will compete in the Group B Knockout Round on Saturday are:

The General Tire Take Off Ceremony will begin each day at 6:45 a.m. at the Wolf Creek Park and Boating Facility, located at 963 N. 16th St. in Grove, Oklahoma. Anglers will depart daily at 7:30 a.m. from the park and return after competition ends at 4 p.m. Fans are welcome to attend all launch events and also encouraged to follow the event online throughout the day on the MLF NOW! live stream and SCORETRACKER® coverage at MajorLeagueFishing.com.

REDCREST 2022 Presented by Costa at Grand Lake O’ the Cherokees features anglers competing with a 2-pound minimum weight requirement for a bass to be deemed scorable. Minimum weights are determined individually for each competition waters that the Bass Pro Tour visits, based on the productivity, bass population and anticipated average size of fish in each fishery.

The 2021 Bass Pro Tour featured a field of 80 of the top professional anglers in the world competing across seven regular-season tournaments around the country. The Top 41 anglers in the Angler of the Year standings after the seven events qualified to compete in REDCREST 2022 Presented by Costa.

Television coverage of REDCREST 2022 Presented by Costa will be showcased across two two-hour episodes, premiering at 7 a.m. ET, July 2 and July 9 on the Discovery Channel. A one-hour special episode of REDCREST 2022 Presented by Costa will premiere at 2 p.m. ET, Sunday, July 17 on CBS. New MLF episodes premiere each Saturday morning on the Discovery Channel, with additional re-airings on the Outdoor Channel. Each two-hour long reality-based episode goes in-depth to break down each day of competition.