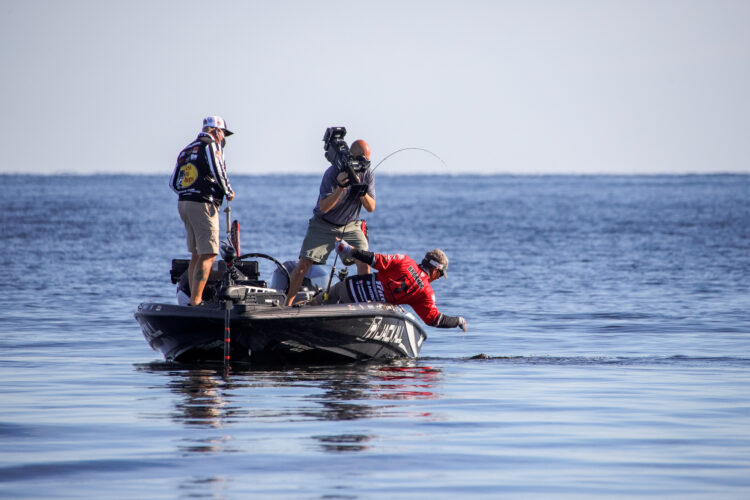 July 13, 2020 (Sturgeon Bay, Wis.) – Major League Fishing (MLF) pro Cliff Pace won Covercraft Stage Five Presented by Abu Garcia Group B Qualifying Round to advance directly to the Championship, joining Group A winner Justin Lucas in one of 10 spots. With half the field eliminated, 38 anglers begin Tuesday’s Knockout Round at zero weight to compete over the remaining eight spots in Wednesday’s Championship Round. The 2020 Bass Pro Tour Seasons Points Championship may come down to Tuesday’s Knockout Round with Jordan Lee, Jacob Wheeler, and Ott DeFoe all battling to advance. Competition resumes Tuesday at 8:00 a.m. CT on MLF NOW!

Forty-year-old Pace caught 107 pounds, 9 ounces Monday to climb from seventh place after Day One (Saturday) and win with a two-day total of 174 pounds on 58 bass. Pace advances directly into Wednesday’s Championship Round joining Justin Lucas who won Group A Qualifying Round on Sunday. The HI-SEAS pro said it wasn’t easy this week and he’s grateful for a day off Tuesday.

“I’m one happy man!” said Pace shortly after MLF official Mike David confirmed his victory on SCORETRACKER®. “I’m tickled to death to have won today because everything here is such a variable. You don’t know what Mother Nature is going to do and everything can fall out of place. A win today means that I don’t have to compete tomorrow and maybe capitalize on a great event in Wisconsin on Wednesday.”

Pace caught nearly all 58 bass over two days with a wacky worm in clear water – both 20, 25-feet deep and shallow. He’s told fans that a consistent, long cast was a key to his victory. A Mississippi resident, Pace won the final Stage of the 2019 Bass Pro Tour in Neenah, Wisconsin last July.

Keith Poche started out slow with zero scorable catches in the first three hours of competition and ultimately ended the day with 53 pounds and a two-day total of 165 pounds, 11 ounces. Jordan Lee and Mike Iaconelli led the field at different points in the day before ultimately being outpaced by Pace as well.

Stephen Browning caught the Berkley Big Bass of the day weighing in at five pounds, 1 ounce. His two-day total of 82 pounds, 10 ounces was enough to maintain a 20th-place finish and secure a spot in Tuesday’s Knockout Round. After finishing Day One in the Top 20, Britt Myers and Adrian Avena fell below the Elimination Line in 21st and 26th places respectively, making room for Matt Lee and Ish Monroe to advance. After only scoring 12 pounds, 13 ounces on Day One (Saturday), Jared Lintner made the biggest gain of the day by scoring an additional 119 pounds, five ounces to finish in sixth with a two-day total of 132 pounds, two ounces.

The Top 10 of Qualifying Group B finished as follows:

The competition continues Tuesday when the 38 qualifiers take to the water for the Covercraft Stage Five Presented by Abu Garcia Knockout Round, including current season Points contenders Jordan Lee (276), Jacob Wheeler (267), Ott DeFoe (264), and Jeff Sprague (249). Each angler earns points (80- 1) awarded by finishing place (1-80) at each Stage of the Bass Pro Tour. The pro with the most points at the end of the season earns the title of “Bass Pro Tour Points Champion.” With Fletcher Shryock and Michael Neal eliminated and the remaining four battling out for one of eight spots remaining in Wednesday’s Championship Round, Tuesday’s competition may be the most consequential of the 2020 Bass Pro Tour season.

Pending no weather delays, the Knockout Round begins at Sawyer Park Boat Launch, Sturgeon Bay, Wisconsin at 6:15 a.m. CT when the field reports to pick-up their MLF official and camera operators before trailering to the ramp of his choice. With lines in at 8:00 a.m. CT, the competition consists of three, 150-minute periods.

The Bass Pro Tour began in 2019 and features 80 of the best professional anglers in the world, including Kevin VanDam, Edwin Evers, Aaron Martens, Mike Iaconelli, Jordan Lee, and Skeet Reese. Each Stage includes six days of competition using the Major League Fishing, catch-weigh-and-immediately-release format, where every bass over a variable minimum weight, which is two pounds on Lake Fork for Stage Three, toward a cumulative weight total for the day. Variable minimum weights are determined by fishery, akin to a golf course handicap. The field of 80 anglers is divided into two groups of 40 (Groups A and B) to compete on days one through four for the Qualifying Round. The winners of each Group earn an automatic berth the Championship Round. The anglers finishing in places 2-20 from each group in the Qualifying Round (40 total) advance to the Knockout Round on day five (Tuesday), which determines who will compete on that final day, the Championship Round (Wednesday), for the Stage title and $100,000.

Highlights from each Stage of the 2020 Bass Pro Tour air on Discovery Network beginning in July 2020 and Sportsman Channel in early 2021. Covercraft Stage Five presented by Abu Garcia will premiere as two, two-hour episodes on Discovery Channel October 3 and 4, 7 – 9 a.m. ET/PT.