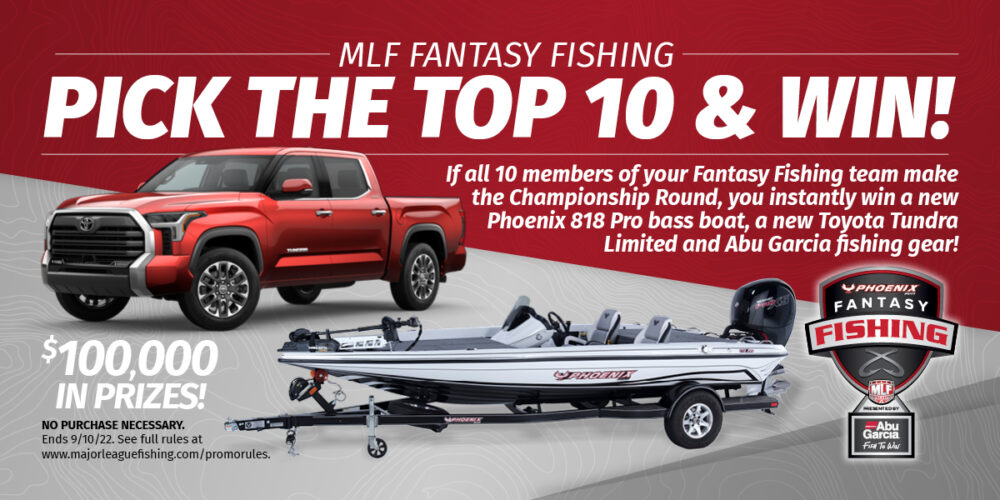 TULSA, Okla. – Major League Fishing, the world’s largest tournament-fishing organization, announced today a new Fantasy Fishing contest that will run through the remaining Tackle Warehouse Pro Circuit and Bass Pro Tour events in the 2022 season. Any Fantasy Fishing player that chooses the Top 10 anglers correctly (the 10 anglers on their fantasy team all make the Championship round), will automatically win a new 2022 Toyota Tundra Limited truck, a Phoenix 818 Pro boat, loaded with Abu Garcia gear – a prize package worth $100,000.

To enter the contest, fans can simply visit FantasyFishing.com and create their team of 10 anglers for each remaining free-to-play Fantasy Fishing game. Anglers earn points based on how many pounds of bass their anglers catch during the event.

The contest will end on Sept. 10, 2022, the start of the final Bass Pro Tour event of the season. Full contest rules can be found at MajorLeagueFishing.com/promorules.

In addition to playing for the Toyota Tundra and Phoenix Boat prize package, fans can also create and join private leagues to compete against friends and family, then watch the live streams and SCORETRACKER® leaderboard to watch their team racking up the points.

Fantasy Fishing players also are competing for an all-expense-paid fishing trip with Bass Pro Tour angler Justin Lucas to the season-long winner on the Bass Pro Tour, an all-expense-paid fishing trip with REDCREST 2022 Champion Bobby Lane to the season-long winner on the Tackle Warehouse Pro Circuit, and new Abu Garcia rod and reel combos to the overall top 25 point-scorers in each Bass Pro Tour and Pro Circuit event.