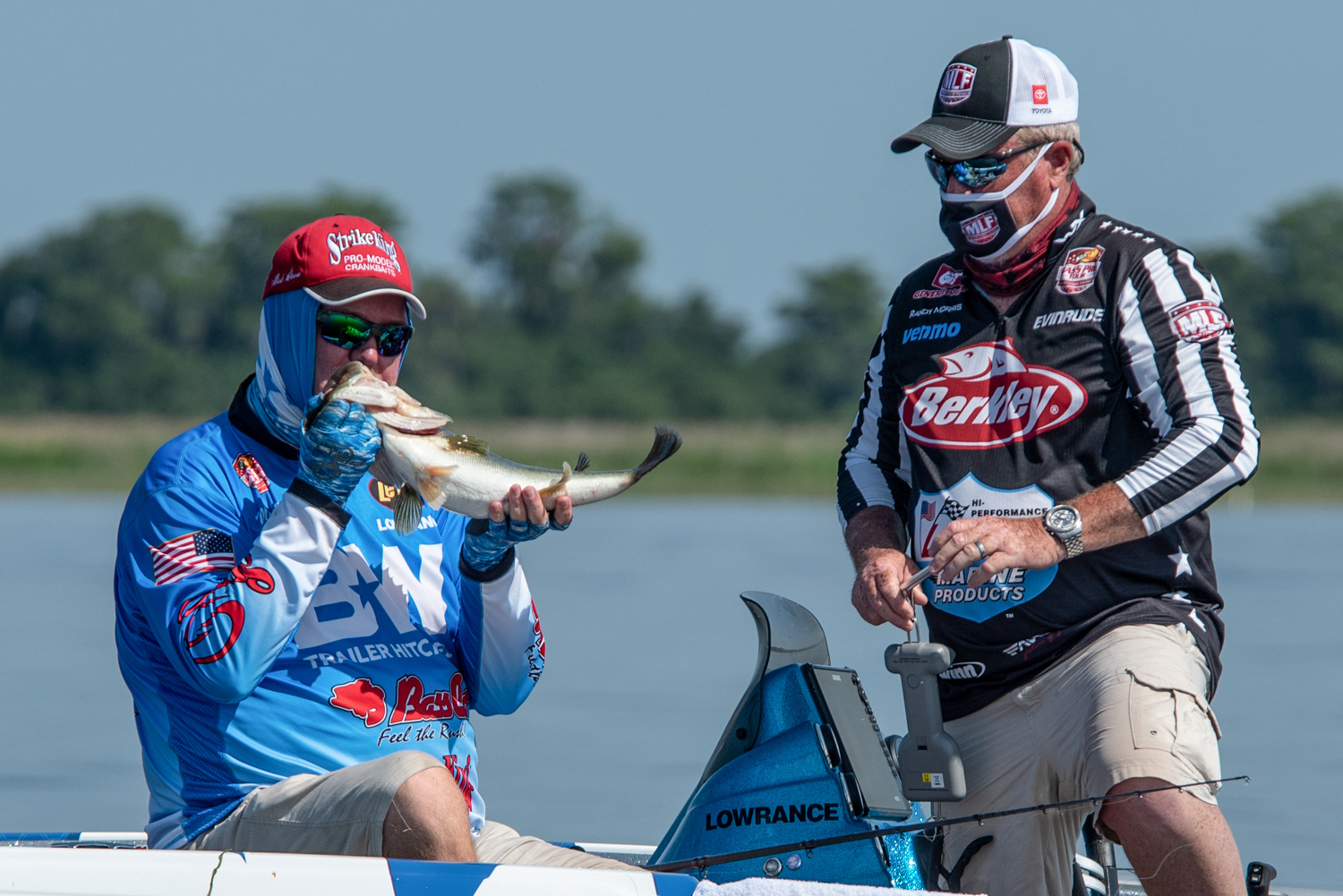 June 10, 2020 (Kissimmee, Fla.) – Major League Fishing (MLF) pro Skeet Reese won Qualifying Round 2, Group B on the Kissimmee Chain in the inaugural Toyota Heavy Hitters Presented by Venmo. Reese will advance directly to Friday’s Championship Round for a chance to win $200,000. General Tire pro Mark Rose won $25,000 for this Round’s Heavy Hitters big bass bonus with a 9-pound, 2-ounce catch from Monday, his first day of the competition for Group B.  Bass Fishing Hall of Famer Mark Davis caught the most weight on Wednesday with 26 pounds, 5 ounces, which catapulted him into fourth place from 24th place after Day 1. Nineteen anglers fell below the Elimination Line and will head home with their $4,000 consolation prizes, including local angler Bobby Lane. Each angler’s score resets to zero as the Top 20 pros advance. Competition continues tomorrow when 38 pros compete in the Knockout Round for one of eight remaining spots in Friday’s Championship Round.

Reese rocked Period 1 with seven scorable fish in the first two hours for nearly 20 pounds. He continued his Day-1 strategy of using a crankbait in the creek mouth to one mile off the main lake, where he leveraged the current flow for much of the day. The General Tire pro finished with a two-day total of 20 scorable bass and a cumulative weight of 67 pounds, 1 ounce. With the confidence of a significant lead after the first period, the General Tire pro used Periods 2 and 3 to explore new areas rather than racking up SCORETRACKER®.

“The first period was perfect; everything was clicking, the bite was on,” recalled Reese. “I was pulling away from the field. I was pretty pumped! My lead gave me the chance to relax and explore some areas I hadn’t tried yet.”

This Qualifying Round win is significant to Reese’s standings on the 2020 Bass Pro Tour Points race. The Auburn, California resident entered this event in 65th place in overall points, well below qualifying for REDCREST 2021 in Tulsa. Reese didn’t qualify for the inaugural REDCREST in August 2019 after a 62nd-place finish overall last season.

“It’s been a tough two years of fishing, but my decision to get over that sand bar on Day 1 was one of the best decisions I’ve made,” remarked Reese. “I had a great run on Lake Fork during (Bass Pro Tour) Stage Three and that boosted my confidence to get back to my way of fishing. I did exactly what I wanted to do today and so hopefully I have a chance to win this thing on Friday. Stay tuned; let’s see what happens. I want one of those trophies!”

General Tire pro Mark Rose held onto the Berkley Big Bass of the Group B Qualifying Round with the 9-pound, 2-ounce largemouth he caught on Monday, landing him a $25,000 bonus. Rose’s MLF official, Dino Goode, awarded Rose his trophy at the end of the Round.

“Wow! Nice trophy,” exclaimed Rose. “What a blessing! Thank you, Lord for a big, old 9-2. I caught it on a Strike King worm. I was finessing a little bit just trying to catch a bunch of fish and I ended up catching a big one. Thank you, MLF.”

Rose finished in second place, 16 pounds behind Reese at 50 pounds, 12 ounces over two days. A slow day for most of the field, Rose picked up four bass throughout the day for a one-day weight of 12 pounds, 3 ounces.  The Memphis-area resident will advance to the Knockout Round for a chance to win $50,000 for the Berkley Big Bass and/or one of eight spots remaining in Friday’s Championship.

Veteran angler Mark Davis rallied Wednesday to move from 24th place after the first day of Qualifying Round for Group B to finish in fourth place. The B&W Hitches pro tallied the most scorable bass by landing 12 for 37 pounds, 11 ounces making his two-day total 44 pounds, 12 ounces. His offshore crankbait strategy worked well all day long, which ironically was exactly what Davis had done in Day 1 with less good fortune.

“Oddly enough, I caught those fish today on the same lure in the same water as I had fished on Monday,” said Davis. “Once I caught a few, I gained confidence and stuck it out.”

Local favorite, Bobby Lane, who calls the Kissimmee Chain home, fell below the Elimination Line in 21st place. The Pure Fishing pro didn’t go down without a fight as he landed six scorable bass totaling 16 pounds, 2 ounces for the day and a two-day total of 23 pounds even, 3 pounds shy of advancing. His biggest fish of the day (3 pounds, 14 ounces) came in the final minutes of regulation. Lane took the loss with grace and wished brother Chris Lane, who finished in seventh place, well as he advances into tomorrow’s Knockout Round.

“This is my home lake and it’s tough, but Chris made it and so I’m glad there’s a Lane in there,” said Lane at the end of Period 3. “I’m really glad to be back fishing (on the Bass Pro Tour). The adrenaline of catching that last one – that’s why I do this; it’s what I love.”

The Top 5, Toyota Heavy Hitters Presented by Venmo Qualifying Round, Group B finished as follows:

In addition to the traditional payout schedule based on finishing order, Toyota Heavy Hitters Presented by Venmo bonuses the angler for the biggest bass caught in each Group. The two-day Qualifying Rounds (June 7-10) will pay a $25,000 big bass bonus ($50,000 total). The Knockout Round on day five (June 11), will feature a $50,000 big bass bonus, while the Championship Round (June 12) will feature a $100,000 big bass bonus, on top of the Stage Title $100,000 prize. Despite Mark Daniels Jr. holding the lead much of the day with a 7-15, Rose’s 9-2 late in Period 3 landed him in the lead for the $25,0000 “Heavy Hitter” big fish bonus for Qualifying Round, Group B, which concludes on Wednesday.

Pending no weather delays, the day begins with launch at Big Toho Marina, Kissimmee, Florida at 6:15 a.m. ET before lines in at 7:00 a.m. Period 1 ends at 9:30 a.m. Period 2 spans 9:45 a.m. until 12:15 p.m. Period 3 begins at 12:30 p.m. and lasts until day’s end at 3:00 p.m. The General Tire Takeout show airs approximately 3 – 4 p.m. from the water. Fans can catch all the action every day of competition on MLF NOW! livestream on MajorLeagueFishing.com or download the MLF App for your Apple or GooglePlay device or on MyOutdoorTV (MOTV).