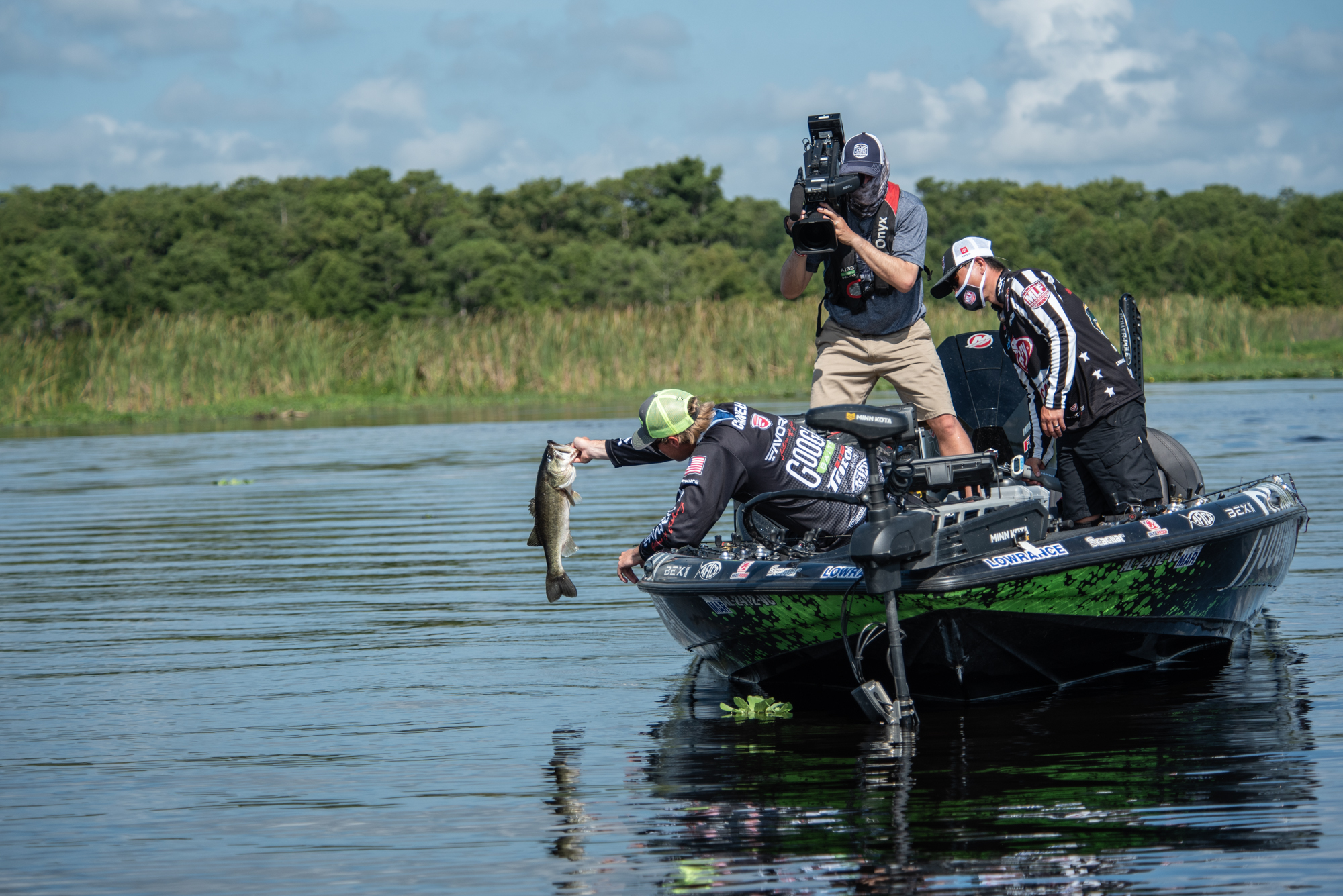 June 11, 2020 (Kissimmee, Fla.) Major League Fishing (MLF) pro Mark Rose won the Toyota Heavy Hitters Presented by Venmo Knockout Round today in a nine-hour, action-packed, slugfest that logged over 818 pounds of scorable bass into SCORETRACKER®. In a buzzer-beater moment, 24th-place finisher Michael Neal knocked out Jordan Lee’s biggest catch of the day by only 1 ounce to win $50,000.  The top eight finishers from today’s field of 38 will join Qualifying Round winners Zack Birge and Skeet Reese in Friday’s Championship Round and compete for their share of the $325,000 remaining from this week’s $753,000 purse, including $100,000 for Friday’s Berkley Big Bass.

Rose ended the day with 52 pounds, 5 ounces and a comfortable seven-pound, nine-ounce lead over Dustin Connell. The General Tire pro caught 13 scorable fish today including the fifth-largest bass of the day weighing 7 pounds, 12 ounces. With no money on the line for winning the Round, Rose elected to stop fishing and head back to the ramp with 10 minutes remaining in regulation. “I feel good about making the Top 8,” Rose relayed to MLF NOW! viewers as he traversed Lake Toho. “It’s good to be back (fishing the Bass Pro Tour). I feel blessed to have had a great day. Yesterday I lost a few; today I caught a few. I love this (MLF) format! I’m going to try to get a good night’s rest and a good meal and get up tomorrow to make a run for it.”

Favorite Fishing pro Dustin Connell ended the day in second place with 44 pounds, 12 ounces on 16 fish, the most scorable bass caught in the Knockout Round. Connell’s largest catch was 4 pounds, 10 ounces. He hustled throughout the day at the mouth of a creek on the Kissimmee Chain bouncing between a jerkbait and jig.

“I was using a soft jerkbait and then I was using a bandito bug made by Googan baits,” said Connell. “I was fishing current and the mouth of the creek, where fish were schooling. I fish currents at home in Alabama; I can’t stand fishing stagnant water, so I had to find moving water. I was right at home all day.”

Third-place finisher Jordan Lee caught 44 pounds, 9 ounces for the day, only 3 ounces shy of Connell, on 14 fish. Lee’s most exciting moment came midway through Period 2 at 11:20 a.m. when an 8-pound, 14-ounce lunker nearly pulled him off his boat as he set the hook. This catch put him in the lead for today’s $50,000 big fish bonus. Lee hung onto that lead for four hours, a timeline that included a 50-minute weather delay, giving him plenty of opportunity to get excited about winning the Berkley Big Bass. Michael Neal, the other 28-year-old on the Bass Pro Tour, landed an 8-pound, 15-ounce largemouth to knock Lee out of the running with only 20 minutes remaining on the clock.

“I’m pretty bummed that right there at the end there, Michael Neal beat me by 1 ounce,” said Lee. “All day I thought I was going to win it. Hats off to him; that’s just how it goes (in competitive bass fishing). I had a good day and I’m pretty stoked to get to be moving on. Hopefully, I saved some fishing spots for the Championship Round.”

Big Bites Baits pro Neal, who finished second on Lake Okeechobee in the Favorite Fishing Stage Two Presented by BassCat this past February, ended the day with three scorable bass weighing 15 pounds, 14 ounces. After a slow morning and a 50-minute weather delay, Neal landed the winning fish to earn $50,000 at 3:25 p.m. ET. MLF official Dean Cox presented Neal with the trophy before the pair returned to the ramp. “Thank you,” said Neal. “It was definitely a grind today, no doubt. I will gladly take this. I had four bites all day, all in the third period, including this one. I caught this on a ½-ounce vibrating jig that has a lot of miles on it. As long as one today was an 8-15, Heavy Hitters fish worth $50,000, I will take a day like this every day.”

Toyota Heavy Hitters Presented by Venmo concludes Friday with the Championship Round where the top-eight finishers from today’s Knockout Round will join Qualifying Round Group A winner Zack Birge and Group B winner Skeet Reese for their share of the remaining $325,000 of prize money.

The Top 8 of the Toyota Heavy Hitters Presented by Venmo Knockout Round finished as follows:

Pending no weather delays, the Championship Day begins with launch at Big Toho Marina, Kissimmee, Fla., 6:15 a.m. ET before lines-in at 7:00 a.m. Period 1 ends at 9:30 a.m. Period 2 spans 9:45 a.m. until 12:15 p.m. Period 3 begins at 12:30 p.m. and lasts until day’s end at 3:00 p.m. The General Tire Takeout show airs approximately 3 – 4 p.m. ET from the water. Fans can catch all the action on MLF NOW! livestream on MajorLeagueFishing.com or download the MLF App for their Apple or GooglePlaydevice or on MyOutdoorTV (MOTV).