Alabama Pro Leads with 23 Bass Weighing 70 Pounds, 12 Ounces After Day 1 of Qualifying Round Group A– Group B to Compete Saturday 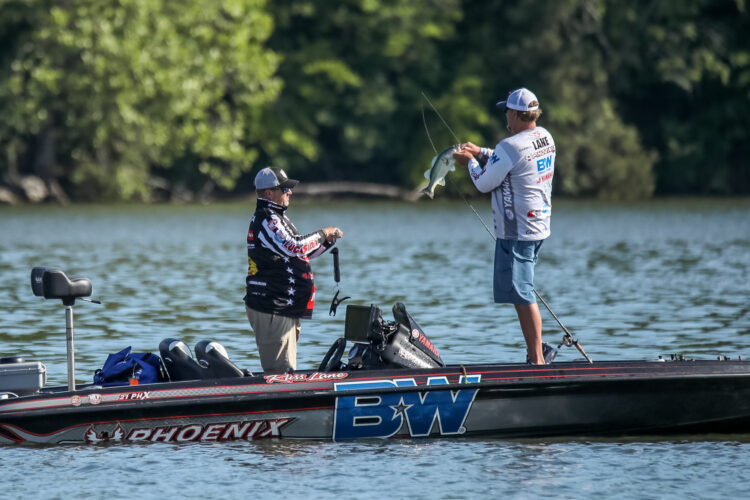 DAYTON, Tenn. – It was the best opening day of the season at the Major League Fishing (MLF) Bass Pro Tour B&W Trailer Hitches Stage Four Presented by ATG by Wrangler at Lake Chickamauga in Dayton, Tennessee. The 40 pros in Group A caught a single-day total of 271 bass weighing 806 pounds, 10 ounces, Thursday – the heaviest weight caught on any Day 1 so far this season.

B&W Trailer Hitches pro Russ Lane of Prattville, Alabama, was firmly in control of the Group A leaderboard after Day 1 concluded, catching 23 bass totaling 70 pounds,12 ounces, to grab the early lead in the two-day Group A Qualifying Round. The six-day event, hosted by Fish Dayton and the Rhea Economic & Tourism Council, features 80 of the top professional anglers from around the world competing for a purse of $805,000, including a top cash prize of $100,000 to the winner.

“Man, what a day,” said Lane in his post-game interview from the water. “It is so much fun out here when things go right, and they really did today. I’ve got around a 20-pound lead and that is rare territory for me. I’m just enjoying the moment right now and I cannot wait to get back out here again for Day 2.”

“I’m around them. There are a lot of good ones under the hydrilla, I just have to cover a lot of water,” Lane continued. “I caught them on a ¾-ounce ChatterBait with a little Big Bite (Baits) (Kamikaze) Swimon trailer with the tails cut down to make it have a little less action so the bait would get down deeper. I had 16-pound-test Sunline Sniper line spooled on a 7:1 (Shimano) Curado reel, and that setup has been doing some work today.”

Reigning Bass Pro Tour AOY Jordan Lee has struggled so far this season and has not made it out of the Qualifying Rounds. But, after a productive day Thursday, it looks like the 30-year-old Alabamian may have broken out of his slump.

“It was a really good day for me,” Lee said. “I made some good decisions and things were just going right for me this morning. I haven’t made a cut yet this year, so to get off to a good start today feels really good.

“I caught some nice ones early and then just kept the ball rolling, picking up a few here and there all day. I mixed in a lot of different summertime, Tennessee River, ledge baits – cranking, a hair jig, and a Berkley (Havoc) Bottom Hopper. These fish here get a lot of pressure, so it was important to get off to a good start. Now, we’ll regroup and get after them again on Sunday.”

The top 20 pros in Group A after Day 1 on Lake Chickamauga are:

The 40 Anglers in Group A compete in their two-day qualifying round on Lake Chickamauga on Friday and Sunday – the 40 anglers in Group B on Saturday and Monday. After each two-day qualifying round is complete, the anglers that finish in 2nd through 20th place from both groups advance to Tuesday’s Knockout Round, while the winner of each group advances directly to Wednesday’s Championship Round. In the Knockout Round, weights are zeroed and the remaining 38 anglers compete to finish in the top 8 to advance to the Championship Round. In the final day Championship Round, weights are zeroed and the highest one-day total wins the top prize of $100,000.

Anglers will take off from the Dayton Boat Dock, located at 175 Lakeshore St., in Dayton, at 6:30 a.m. ET each day of competition. Each day’s General Tire Takeout will also be held at the Dayton Boat Dock, beginning at 3:30 p.m. Fans are welcome to attend all takeoff and takeout ceremonies and also encouraged to follow the event online throughout the day on the MLF NOW!® live stream and SCORETRACKER® coverage at MajorLeagueFishing.com.

Television coverage of the B&W Trailer Hitches Stage Four Presented by Wrangler at Lake Chickamauga will be showcased across two two-hour episodes, premiering at 7 a.m. ET, Oct. 9 on the Discovery Channel. New MLF episodes premiere each Saturday morning on the Discovery Channel, with additional re-airings on the Outdoor Channel and the Sportsman Channel. Each two-hour-long reality-based episode goes in-depth to break down each day of competition.