Louisiana Angler Catches Two-Day Total of 50 Pounds to Advance Directly to Friday’s Championship Round to Compete for $100,000, Field of 38 Set for Thursday’s Knockout Round 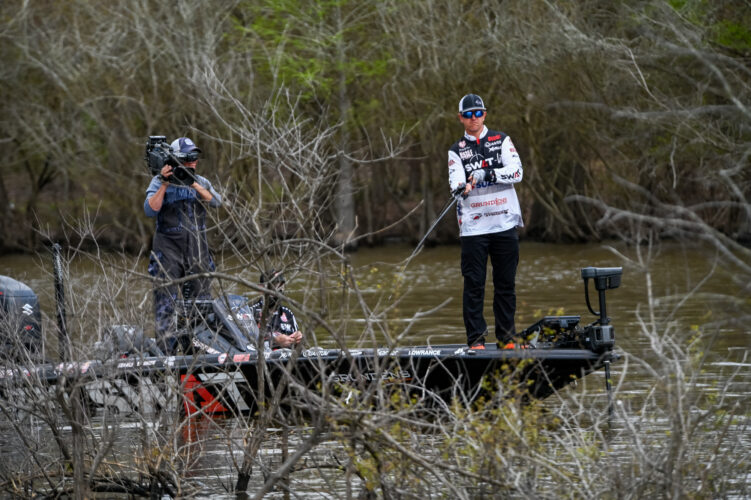 JASPER, Texas – Pro Gerald Spohrer of Gonzales, Louisiana, boated eight scorable bass Wednesday weighing 23 pounds, 14 ounces to win the two-day Qualifying Group B round at the Toro Stage One at Sam Rayburn Reservoir presented by Power-Pole. Spohrer’s two-day total of 15 bass weighing 50 pounds even earned him the victory by a 2-pound, 1-ounce margin and advances him directly into Friday’s final-day Championship Round of competition. The six-day tournament is being filmed for television broadcast on the Discovery Channel and the Outdoor Channel later this year and live-streamed online.

The remaining 38 anglers – 19 from Group A and 19 from Group B – will now compete Thursday in the Knockout Round, where weights are zeroed, and the anglers compete to finish in the top eight to advance to Championship Friday. Friday’s Championship Round will feature Group A winner Ott DeFoe, Group B winner Spohrer, and the top eight anglers from the Knockout Round competing in a final-day shootout for the top prize of $100,000.

“This is my first round that I’ve won with Major League Fishing, and it’s overwhelming the joy that I have right now,” Spohrer said. “Duking it out with my buddy, Randall Tharp, right at the end was exciting, and to get to do it right here, on Sam Rayburn, is a big deal to me.”

Spohrer credited his equipment as being the key to his success – the same 7-foot Quantum Smoke heavy-action casting rod paired with a Quantum Smoke 8:1 reel and spooled with 50-pound-test Seaguar Smackdown braided line (stealth gray) has caught every one of his fish this week.

“I’ve been a one-trick pony the last two days,” Spohrer said. “If you’ve been watching the live stream, you probably saw how deep I was getting my swimjig into the wood and dragging those fish out of there. It’s all worked out for me and I can’t tell you how happy I am.

“Now I get a day off and I’m going to get ready for the Championship Round,” Spohrer went on to say. “There will only be 10 of us, so I start the year automatically with a top-10 finish and now I’ve got a real legitimate chance to compete for that red trophy. I can’t wait.”

Despite his second-place finish, Tharp was very happy to see his good friend win and advance directly to the Championship Round.

“That’s why I’ve always loved tournament fishing – when it comes down to the last second, the last cast, and having the opportunity like I did,” Tharp said. “My hat’s off to Gerald. I hope I made him sweat a little bit, because I sure had a good time this afternoon. I had my opportunities.”

Tharp said that he relied on just two rods Wednesday, and likely would only use two in the Knockout Round as well.

“Basically, I’m just flipping bushes and trees, and anything in front of me,” the Florida pro said. “I threw a Zoom Z-Hog with a 5/16-ounce weight and a straight shank flipping hook. Later in the day I picked up a little frog and that baby was awful good to me today. The average bite on the frog was way better than the flipping bite. I’m probably going to keep those two rods in my hand all day tomorrow and go to work and hopefully make the Championship Round.”

An emotional Jeff Kriet of Ardmore, Oklahoma, was the last man in, finishing the day in 20th place.

“Thank God, man. It has been such a stressful day,” Kriet said. “I needed this. I’ve been sucking, and I haven’t been catching them. Last year, in the first two tournaments of the year, I finished like dead last. I only made a couple of cuts last year. I need a good year, badly. This gives me confidence and that’s important, because I’d lost all confidence. I was literally thinking I might have to hang this stuff up. I know it’s not like I won the tournament today, but making the cut really means a lot to me. It’s not easy to do. And it’s some positive momentum. I’m tickled that I get to come back out here, tomorrow.”

Kriet credited two baits – a wacky-rigged Big Bite Baits Trick Stick and a Big Bite Baits Methiolate Floating Worm – for his success in the Qualifying Round.

The top 20 pros from Qualifying Group B that now advance to Thursday’s Knockout Round on Sam Rayburn Reservoir are:

Full results for the field can be found at MajorLeagueFishing.com.

Lucas won the $1,000 Berkley Big Bass Award on Wednesday, catching a 7-pound, 14-ounce largemouth which bit a swimbait in Period 2. Berkley will award $1,000 to the angler that weighs the biggest bass each day, and a $3,000 bonus to the angler who weighs the largest bass of the tournament.

The 40 Anglers in Group A competed in their two-day qualifying round on Sunday and Tuesday – the 40 anglers in Group B on Monday and Wednesday. With both groups two-day Qualifying Round complete, the anglers that finished in 2nd through 20th place from both groups now advance to Thursday’s Knockout Round, while the winner from each group advances directly to Friday’s Championship Round. In the Knockout Round, weights are zeroed and the remaining 38 anglers compete to finish in the top 8 to advance to the Championship Round. In the final day Championship Round, weights are zeroed and the highest one-day total wins. Full breakdown of the format can be found at MajorLeagueFishing.com.