163 Professional Anglers Head to Massena to Compete for up to $135,000 and Valuable Points in Angler of the Year Race 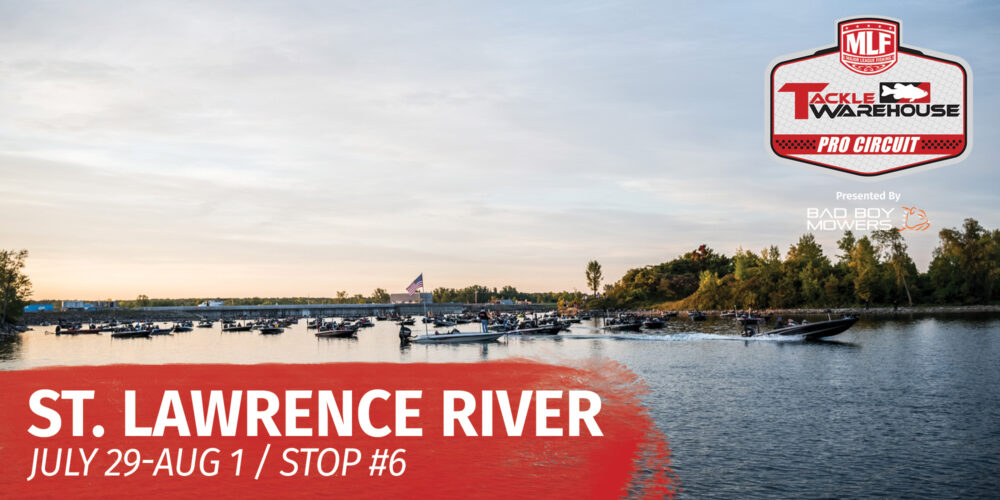 MASSENA, N.Y. – Major League Fishing (MLF), the world’s largest tournament-fishing organization, is set to return to Massena, New York, next week, July 29 – Aug. 1, for the MLF Tackle Warehouse Pro Circuit Presented by Bad Boy Mowers, Savage Arms Stop 6 Presented by Abu Garcia at the St. Lawrence River. In its 26th season, the circuit (formerly known as the FLW Tour) features a roster of the world’s best bass-fishing professionals competing across six regular-season events, each with a top award of up to $135,000. The field also competes for valuable points to qualify for the 2021 Tackle Warehouse TITLE Presented by Mercury – the Pro Circuit Championship – and the coveted Angler of the Year title.

Hosted by the Town of Massena, this is the sixth and final Pro Circuit event of the 2021 season and offers competitors a total purse of more than $900,000.

Pros will have the run of the river but will not be allowed to lock downstream into Lake St. Francis or run out into Lake Ontario proper. While this may be a hindrance to some anglers, those who thrive fishing river systems will have everything you could ask for in a northern fishery – deep and shallow grass, docks, rock piles, current seams, sand flats, boulders and more.

Pro Scott Dobson of Clarkston, Michigan, who will be competing in this event, finished in second place in a 2019 Toyota Series event on the St. Lawrence River, picking apart shallow-water smallmouths to win nearly $20,000. With a top prize of $135,000 on the line, Dobson is excited to return to Massena for another shot.

“I won a Toyota Series event on 1000 Islands in 2016 during this time of year and came in second on the St. Lawrence River in 2019, so I’m excited for another chance on this fishery,” said Dobson. “I love fishing current and Great Lake systems and have had a lot of success in that realm, so I’m excited to get there and get started.

Dobson said everything will be in play at this event – from fishing shallow on 6- to 8-foot flats to deep dragging drop-shot and Carolina rigs in the heavy current of the main river.

“Baits that will dominate in this tournament are moving baits like jerkbaits and spybaits, along with Ned rigs and drop-shots on the bottom,” said Dobson. “I also expect to see a lot of fish caught on the Berkley PowerBait MaxScent Flatnose Minnow, and if guys are lucky enough to have it, on the new MaxScent Little General. That bait is a Ned rig type bait, with MaxScent, and is being released at ICAST this week. But I know a lot of guys already have those in their arsenal.”

Dobson said he believes it will take 20 pounds per day to get into the Top 10 but to win the event will take a solid 23 pounds per day. While it is a big commitment to make long runs on the river, he anticipates a lot of guys are going to be running 50 to 70 miles to their fishing locations, which creates a risk factor due to the time it takes to make those long runs.

“It really depends on whether guys are looking to just go for the win or planning to play it conservative and stay closer to the ramp where they don’t have as much of a risk of not getting back in time,” said Dobson. “This being the final event, that affects the points race to get into the TITLE championship and Angler of the Year standings. Some anglers may not be swinging for the fence.

“I don’t have a shot at the TITLE after a couple bad events, so I’m not worried about the points,” continued Dobson. “I’m all in and I’ve got to go for the win. I plan to make big runs and try to go places where I can catch bigger fish. I may not catch as many fish, but I expect them to be bigger and better-quality fish where I’m going.”

Anglers will take off at 6:30 a.m. ET, Thursday through Sunday, from the Massena Intake Boat Launch located at 1415 State Highway 131 in Massena. Weigh-ins will also be held at the boat launch daily at 3 p.m. Fans are welcome to attend the event or follow the action online through the MLF NOW! live stream and coverage at MajorLeagueFishing.com.

In addition to the launch and weigh-in, fans and community members are invited to community events being held on Saturday, July 31. The Town of Louisville will host a Kids’ Fishing Derby on the Wilson Hill Causeway from noon to 2 p.m. ET, open to children 6 to 12 years of age. The derby is free to the public and prizes will be awarded for tagged fish caught by derby participants during the event. Only 250 spots are available upon registration. To register for this event, visit https://www.exploremassena.com/events/kids-fishing-derby-ages-6-12/.

The Town of Massena will also host a Party at the Beach on Saturday, July 31 from 6-9 p.m. ET. Anglers and the general public will enjoy live music, fireworks and a variety of food and beverages. There is no admission charge to enjoy the band and fireworks. Food trucks and beverage vendors will be onsite selling refreshments to park visitors. For more information regarding the event, visit https://www.exploremassena.com/events/party-at-the-beach/.

The MLF Tackle Warehouse Pro Circuit Presented by Bad Boy Mowers, Savage Arms Stop 6 Presented by Abu Garcia at the St. Lawrence River will feature live on-the-water coverage and a two-hour action-packed television show that will premiere on the Outdoor Channel on Sunday, Sept. 1 from 7 to 9 a.m. ET and re-air on the Sportsman Channel this fall. Weigh-ins will be streamed daily and fans can catch live on-the-water action all day Saturday and Sunday, July 31 – Aug. 1 on MLF NOW! beginning at 7 a.m. ET at MajorLeagueFishing.com.

The 2021 season culminates with the Tackle Warehouse TITLE Presented by Mercury, the Pro Circuit Championship, where the top 48 pros in the points standings plus 2020 TITLE Champion Rusty Salewske of Alpine, California, and 2020 AOY Ron Nelson of Berrien Springs, Michigan, will compete for at top prize of $235,000. The 2021 TITLE will be on the Mississippi River in La Crosse, Wisconsin on Aug. 17-22, and is hosted by Explore La Crosse.