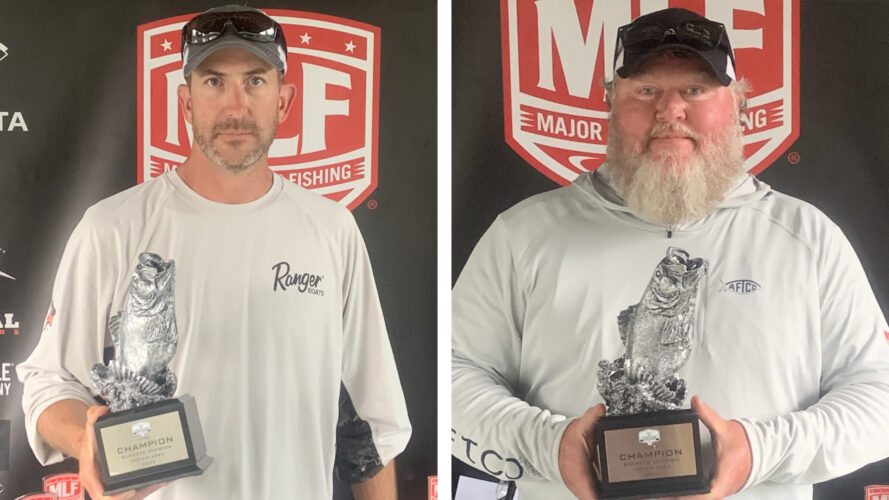 “We went back to the Game Preserve where there was one spot I wanted to fish, and there were already boats there,” Nesbitt said. “I’m a big frog fisherman, but there were people already frogging there, so I just went to finesse fishing. We had boats literally right beside us all day. I threw a wacky rig and a swimbait, then caught one right at the end of the day on a frog that was a good cull up.”

Nesbitt said he made long casts to fish guarding fry around grass and lily pads, and said the key to his success was bait placement more than anything else. He also said he caught nine fish, all keepers, during the tournament.

“It was a pretty simple day, really,” Nesbitt said. “We just battled it out in one little area.

“All of my fish came on a spinning rod in the heavy vegetation,” Nesbitt said. “I was really trying to focus on winning this event and pre-fished four or five times for it. I’ve spent a lot of time on that lake.”

Jarrett Martin of Mansfield, Ohio, had a largemouth that weighed 4 pounds, 6 ounces that was the heaviest of the event in the Boater Division and earned the day’s Berkley Big Bass Boater award of $795.

Larry Dew of Allison Park, Pennsylvania, caught the largest bass in the Co-angler Division, a fish weighing in at 3 pounds, 2 ounces. The catch earned him the day’s Berkley Big Bass Co-angler award of $387.