Covercraft Stop 6 on Lake Champlain Presented by Wiley X to Showcase 155 Professional Anglers Competing for Top Prize up to $135,000 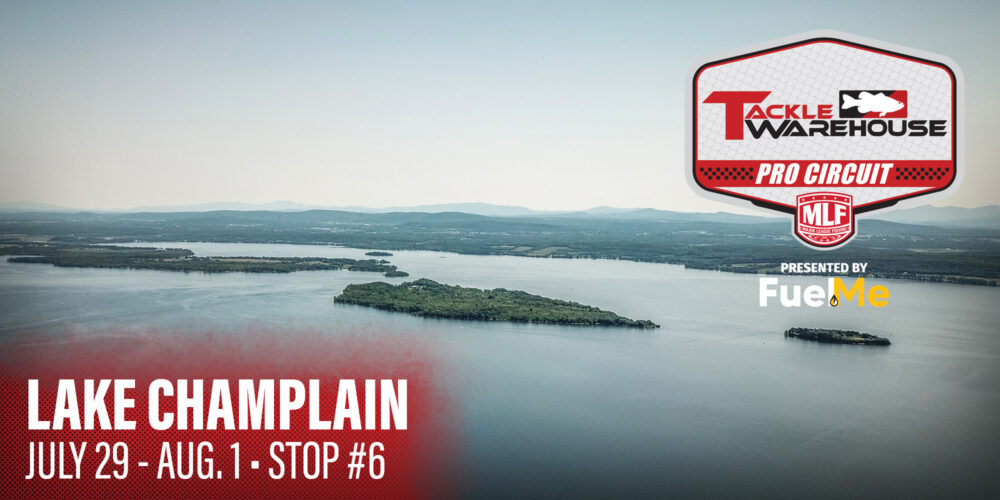 PLATTSBURGH, N.Y. – Major League Fishing, the world’s largest tournament-fishing organization, is set to return to Plattsburgh, New York, next week, July 29 through Aug. 1, for the sixth and final event of the 2022 Tackle Warehouse Pro Circuit Presented by Fuel Me regular-season – Covercraft Stop 6 on Lake Champlain Presented by Wiley X. The four-day event, hosted by the City of Plattsburgh and the Adirondack Coast Visitors Bureau, will mark the 13th time the Tackle Warehouse Pro Circuit has competed on Lake Champlain and will showcase 155 professional anglers competing for a total purse of more than $850,000.

“We are so excited to have Major League Fishing tournaments back on the Adirondack Coast and Lake Champlain year after year,” said Alyssa Senecal, Adirondack Coast Visitors Bureau Assistant Director of Tourism & Marketing. “These tournaments not only have an incredible economic impact on our area, but bring long-lasting exposure to our backyard and anglers who just keep coming back for more.  Thank you to everyone at MLF for recognizing, showcasing and caring for the destination that we call home.”

When the Pro Circuit last visited the lake in 2019, pro Casey Scanlon of Eldon, Missouri, put together a four-day total of 76 pounds, 2 ounces to take home the top award of $100,000. Legendary pro Gary Yamamoto of Palestine, Texas, holds the Tackle Warehouse Pro Circuit record for the heaviest one-day weight on the fishery, bringing a limit to the scale weighing 24 pounds, 4 ounces back in 2011.

In its 27th season, the Pro Circuit features a roster of 155 of the world’s best bass-fishing professionals competing across six regular-season events, each with a top award of up to $135,000. The field is also competing for valuable points to qualify for the 2022 Tackle Warehouse TITLE Presented by Mercury, the Pro Circuit Championship – held this year on the St. Lawrence River in Massena, New York – and the coveted Bally Bet Angler of the Year (AOY) title.

In Tackle Warehouse Pro Circuit competition, the full field of 155 anglers compete in the two-day opening round on Friday and Saturday. The Top 50 pros based on their two-day cumulative weight will advance to Sunday. Only the Top 10 pros, based on cumulative weight from the first three days, will continue competition on Championship Monday, where weights will be zeroed and anglers will compete in a one-day shootout for the grand prize of up to $135,000, including a lucrative $35,000 Phoenix MLF Bonus for qualified anglers.

Scanlon said the 2019 tournament – where he focused solely on largemouth on Ticonderoga – was his first and only time to ever fish on Lake Champlain, so he’s looking forward to getting back out on the fishery.

“I believe I’m just inside the cut for the TITLE championship, so I need a good showing at this event to make it to the TITLE,” Scanlon said. “It’s a little later than the last time we were there and there haven’t been a lot of major tournaments won in recent years in the area where I won, so that has me a little nervous. But, Lake Champlain is a tremendous fishery and I’ve been doing my homework. I spent some time on the northern end of the lake last time as well during practice, and I think the smallmouth are going to be a bigger factor this time around.”

Scanlon said he expects to still see some fish spawning, based on local tournaments currently taking place on the fishery, but he expects the fish to be transitioning to more of their summer patterns by the time the event begins.

“Champlain is full of fish, so catching fish isn’t a problem, but catching 4-pound-plus, quality fish is going to be key,” Scanlon said. “I imagine it’s going to be different than the last time I was there, so I just plan to stay on my toes, keep an open mind and try to focus on what’s going on this time around.

“It’s a big body of water, and with only two days of practice, you aren’t going to be able to see the whole lake,” Scanlon said. “I plan to spend one day on the north end, focusing solely on smallmouth, then spend another day down south searching for largemouth.

“Champlain is a fishery where you can win on either species – and a combination of the two could be a winning pattern as well – so I just plan to get out there and try to get a good feel for which species is currently weighing heavier and is easier to catch.”

Scanlon said he predicts it will take anywhere from 74 to 80 pounds to win the four-day event.

“The fish should be finishing up the spawn and getting healthy, so we should see some good weights this time of year. You’re typically going to need 18 pounds per day or better to make the cuts and to have a shot at the championship round.”

Scanlon said it would be awesome to pull in another win on Lake Champlain.

“The tournament is shaping up a lot like it did last time for me, with the points scenario – and wins are always great – but it would be really special to go back and win it again on the same fishery,” Scanlon said.

Anglers will take off at 6:30 a.m. ET, Friday through Monday, from the Plattsburgh Waterfront, located at 5 Dock Street in Plattsburgh. Weigh-ins will also be held at the waterfront daily at 2:30 p.m. Fans are welcome to attend the event or follow the live on-the-water action all four days of competition online on MLF NOW! beginning at 7 a.m. ET at MajorLeagueFishing.com.

As part of the event, on Thursday, July 28, from 9-11 a.m. ET, the MLF Fisheries Management Division (FMD) will lead a clean-up event at the Plattsburgh Waterfront – the Costa Clean Water Matters Program supported by SeaArk Boats. Volunteers will clean up trash and debris from the shores of Lake Champlain, and SeaArk Boats will support the efforts by providing their revolutionary trash clean-up boat for use on the water during the clean-up. Numerous Pro Circuit anglers, including Dakota Ebare, Robby Lefere, Terry Luedtke, Jeff McClain, Jimmy Reese, Skeet Reese and John Voyles will be present at the event.

The 2022 season culminates next month with the Tackle Warehouse TITLE Presented by Mercury, the Pro Circuit Championship, where the Top 48 pros in the points standings, along with 2021 TITLE Champion Jimmy Washam and 2021 AOY Michael Neal, will compete for a top prize of $235,000. The 2022 TITLE will be on the St. Lawrence River in Massena, New York, Aug. 16-21, and is hosted by the Town of Massena.