Takahiro Omori Climbs Leaderboard to Win and Advances to Championship Round 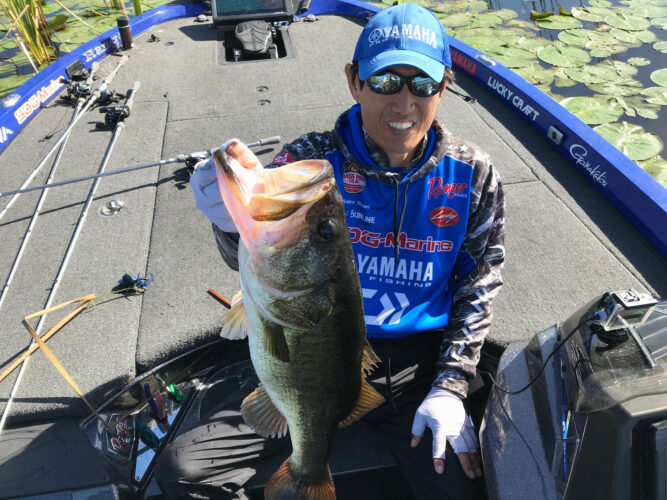 February 23, 2020 (Okeechobee, Fla.) — The Bass Pro Tour continued on Lake Okeechobee Sunday for the third day of the Favorite Fishing Stage Two Presented by Bass Cat. Anglers in Group A found some relief with less wind and warmer temperatures when compared to Friday’s start to the Qualifying Round.

Takahiro Omori rose seven places to win the Qualifying Round for Group A securing an automatic berth in the Championship Round. Wesley Strader doubled his Friday catch to secure second place with a two-day total of 28 pounds even. Zach Birge rose 31 places after a scoreless first day by catching 27 pounds, 3 ounces today. Group B, currently led by Dean Rojas with 20 pounds, 5 ounces, will return to the water on Monday to determine the remaining 20 anglers to advance.

Ranger Boats pro Omori opened his day with an 8-pound, 4-ounce bass in the second half of the first period. He then sealed his first-place position throughout the day with a steady pace of 2-pound catches. By winning “Group A” of the Qualifying Round with a two-day total of 33 pounds, 9 ounces, Omori skips the Knockout Round and advances directly to Wednesday’s Championship Round. This guarantees him a minimum payout of $12,000.

Tennessee-resident Strader moved from 14th place on Friday to second place today. He caught six of seven before noon and said he found a rhythm that didn’t necessarily align with his original plan.

“Today was about having an open mind,” said Strader. “I had to go into today doing things that are not usual to Florida fishing but rather getting back to how I like to fish. I found an area that wasn’t exactly my original plan, but I stayed and figured a few more things out.”

Zack Birge credits fellow MLF pro Mike Iaconelli with inspiring him to go into today with a winning attitude despite a scoreless first day on Friday. Iaconelli ended his first day of the 2020 Bass Pro Tour without a catch and then surged forward in day two of the B&W Hitches Stage One presented by Power-Pole Qualifying Rounds with a one-day total of 23 pounds, 3 ounces to make the Knockout Round.

“You’re never out of it in this game,” said Birge. “I thought about how Ike caught nothing on the first day in Eufaula and then came back with a ‘big bag’ on the second day. I got a little momentum this morning and then (Ike’s success) kept me motivated.”

After finishing 78th out of 80 anglers in 2019, the first season with the Bass Pro Tour, Mike McClelland continued his 2020 renaissance today by earning a second top-twenty finish. He caught 19 pounds, 3 ounces Sunday – the third highest weight of the day behind Strader and Omori. McClelland finished seventh overall with a two-day total of 25 pounds, 2 ounces. One of the first anglers to join MLF, McClelland expressed his enthusiasm for both the MLF format and the variable minimum weight rule change in 2020 as energizing to him as well as the sport of competitive bass fishing.

“This is the most stressful, intense, and exciting format I’ve ever fished,” said McClelland. “When we started MLF where every fish counts and no limits, we raised the bar for competitive fishing and now with a 2-pound minimum on Lake Okeechobee our fans get to see the best pros in the world compete at the highest level in the history of bass fishing.”

Pennsylvania native Dave Lefebre landed today’s big bass weighing in at 9 pounds. He ended the day in 11th place and will advance to Tuesday’s Knockout Round. This catch will also improve his position to qualify for Heavy Hitters when added with the 4-pound, 9-ounce bass from Stage One in Eufaula. MLF Heavy Hitters Presented by Venmo brings together the 30 anglers with the heaviest “virtual bags” after five Stages of the Bass Pro Tour. Anglers will compete for over $750,000 in prizes including a Berkley Big Bass payout ranging from $25,000 to $100,000 per day. Heavy Hitters takes place on the Kissimmee Chain (Fla.) May 16-20, 2020.

The Top 10 of the Qualifying Round, Group A finished Day 2 as follows:

Group B will return to the water Monday morning for their second day of the Qualifying Round. Takeoff begins at C. Scott Driver Park in Okeechobee, Fla. at 7-7:30 a.m. ET with lines in at 8:00 a.m. ET. Forecasts indicate the weather will continue to improve after the group’s dismal first day on Saturday when high winds and rough conditions resulted in nine anglers ending Day 1 scoreless.