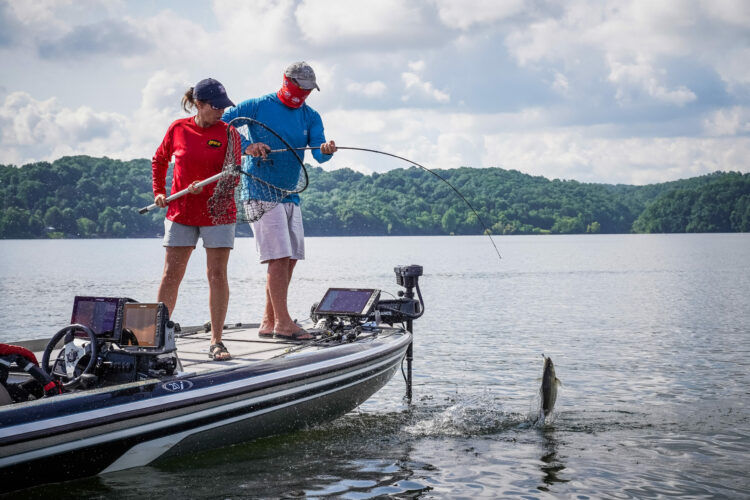 DANDRIDGE, Tenn. – Forty-nine of the best weekend boaters and Strike King co-anglers from across the country continued their three-day competition Friday in Dandridge, Tennessee, for a top prize of $120,000 at the 38th annual Phoenix Bass Fishing League Presented by T-H Marine All-American at Douglas Lake presented by TINCUP.

After starting the day in ninth place, Church Hill, Tennessee, boater Brant Grimm weighed a 19-pound, 1-ounce limit – the largest limit so far in the event – to vault to the top of the leaderboard with a two-day total of 10 bass weighing 32 pounds, 5 ounces. Day 1 leader, Leslie Brandenburg of Springfield, Missouri, fell to second place with a limit of bass weighing 13-12, good for a two-day total of 32-2.

The field is now cut to just the top 10 boaters and co-anglers as they prepare to head out Saturday for the third and final day of competition.

“My game plan today was the exact same as yesterday – deep cranking,” said Grimm, who lives just over an hour away from Douglas Lake. “I’ve fished this lake my whole life. I fished the exact same stuff (as yesterday). My fish bit a little better today than they did yesterday, and we had a great day.

“I caught a lot of fish, but I never could cull,” Grimm continued. “I caught most of my weight pretty early, then I just kept catching 3-pounders and couldn’t cull.”

Grimm said that he hit several holes, deep-cranking a Strike King 6XD. He said that he wasn’t really running a rotation of spots, but rather running whatever he could get to. With only 10 competitors on the water tomorrow, the prime areas should be a bit more open going forth.

“The community holes are definitely at play, but I had a couple of places that were a little sneakier than average,” Grimm said.

With just a 3-ounce cushion separating Grimm from the pack, Grimm plans to stick to his game plan and hopes he can earn the biggest victory of his career tomorrow.

“I’m ready. I’m ready to go. We could go right now,” Grimm said. “I am very excited – I’ve been waiting for this event for a long time. I haven’t been able to sleep for months. But I’m going to sleep well tonight. I’m ready to go get them.”

The top 10 boaters advancing to the final day of competition on Douglas Lake are:

The final 10 Strike King co-anglers are:

The final 10 All-American boaters and Strike King co-anglers will take off from the Dandridge Boat Dock, located at 100 Public Drive in Dandridge, at 7 a.m. ET Saturday. Saturday’s final Championship Weigh-in will also be held at the dock at 3:30 p.m. Fans are welcome to attend or follow the event online through daily coverage, live blogs and photos at MajorLeagueFishing.com.

Live weigh-in coverage will be streamed daily on MajorLeagueFishing.com. Television coverage of the 2021 Phoenix Bass Fishing League Presented by T-H Marine All-American at Douglas Lake presented by TINCUP will premiere on the Sportsman Channel Sept. 29, 2021, and on the Outdoor Channel on Oct. 3, 2021.

Additionally, the highest-finishing boater and Strike King co-angler from each of the seven Regional Championships (including the Wild Card) and the TBF National Championship at the All-American will advance to the 2021 Toyota Series Championship for a shot at winning $235,000 and $33,500, respectively.

The full field of anglers competed on Thursday and Friday, with only the top 10 boaters and top 10 co-anglers based on their two-day cumulative weight now continuing to Championship Saturday. The 2021 All-American champions will be determined by the heaviest three-day total weight.