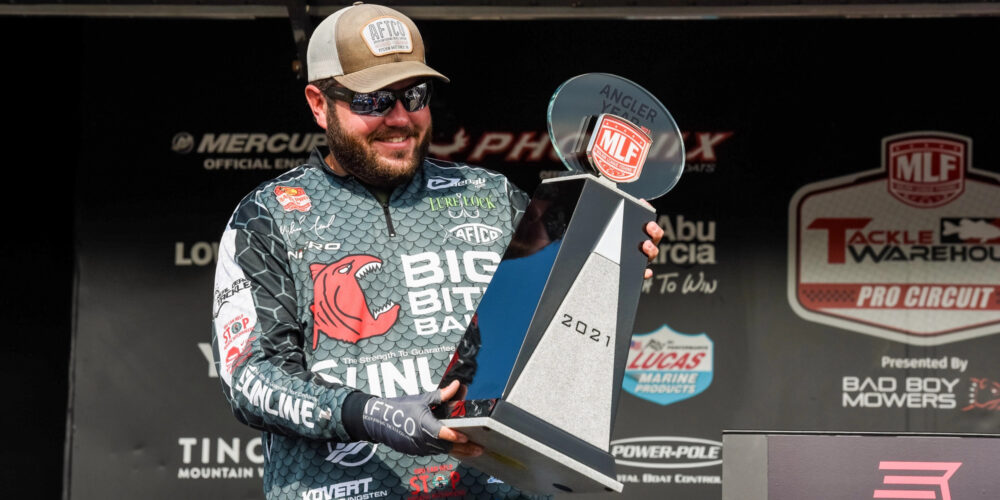 TULSA, Okla. – Based in Dayton, Tennessee and growing up in a family of anglers, Michael Neal started fishing as a pro on the former FLW Tour at just 20 years old. Since then, he’s finished second in the Forrest Wood Cup and REDCREST, and generally been excellent, consistent … and shy of a win. Though it took all year to make it happen, the 29-year-old pro finally has that win after being crowned Tackle Warehouse Pro Circuit Angler of the Year on Day 3 of  Savage Arms Stop 6 Presented by Abu Garcia on the St. Lawrence.

Fishing a nearly flawless season, Neal started the year with a 22nd-place showing at Okeechobee and a 33rd-place finish at Lewis Smith. Then, he turned up the heat. In the final four events on Lake Murray, the Potomac River, Lake Eufaula and the St. Lawrence, Neal’s lowest finish was 11th, which surged him past a slipping Cole Floyd and well ahead of Skeet Reese.

Finishing 11th at the St. Lawrence with 55 pounds, 3 ounces of smallmouth, Neal wrapped up the win in style.

“It still really hasn’t set in, I’m excited, but I don’t think I have everything emotionally coming out yet,” Neal said of the AOY title. “It’s just a great year, there are so many things I can look back on that shouldn’t have happened that did. Randy Haynes once told me, ‘When you’re going to win a tournament, stuff like that will happen.’ It’s happened every tournament this year and his words came true.”

Neal said he’s gotten lucky all year, with one good call after another making the season come together. When you do it all year long it stops being luck at some point, but he’s still grateful for the things that have gone right.

“There’s something from every single tournament that I can look at and say ‘Wow, that was lucky’. Either catching a big one or catching a couple off a place, or whatever,” Neal said. “At Murray, for one, I went up the river in practice for about three hours and had one bite and it was a 2-pounder. Then, the first day I had an OK bag skipping docks, the second day I had to find something else to do – I went up the river and started catching them. The fourth day, that’s where I caught almost all my fish.

“At the Potomac, I didn’t fish down south all tournament, then I ran back to Aquia [Creek] the last day and caught some fish that were really key to coming in second. Every tournament, there’s something that happened that just helped things go right.”

Even at the St. Lawrence, on his very last day of fishing, Neal had some things just go right.

“I was re-tying and I had individual rock piles marked, and I set my trolling motor to go towards the next one and it actually put me up on top of a grass flat,” Neal said. “As soon as I got done re-tying, I realized where I was, stood up, picked up a drop-shot, flipped to the edge of the grass and caught a 4-pounder right there. It’s been like that all year.”

A pitcher in his youth, Neal lettered for the varsity team as a freshman in high school, but quickly turned to fishing.

“When I hurt my elbow playing baseball, I had to make a choice, to either completely tear my ligament for Tommy John surgery or quit,” Neal said. “When I quit baseball, fishing was pretty much all I did all summer, and any time I got the opportunity.”

Shepherded along by his father Mike Neal, his grandfather Alan Brown and his uncle Rogne Brown, Neal has been competitive from the get-go.

“My first couple years were pretty rough, ’12 and ’13,” Neal said. “2012 was pretty much a learning experience, my first year being on tour, but since then, everything has kinda clicked. I’ve always went out there and did my own thing, trying not to worry too much about what everybody else is doing or what you’re supposed to do at that lake. Especially now, I just do what I want to do and go fish my way, and it’ll either work out or it won’t.”

Fishing BFL events and as a co-angler on the FLW Tour in 2008 and 2009, Neal worked his way up so quickly that it’s easy to think he’s been around for longer than he has. Starting on the Tour as a pro in 2012, Neal fished five events the first season while still in college to get his feet under him.

Back then, the same low-key and friendly angler was catching fish all over the country and putting up highlight reel finishes when he got in his wheelhouse on the Tennesee River. In 2014 and 2016, Neal banked Top 10 finishes on Pickwick Lake, finishing second both times and absolutely cracking them on the final day in 2014. In 2016, he sat on one schooling spot for the entire event to finish runner-up to John Cox in the Forrest Wood Cup on Wheeler Lake.

This year, fishing both the Bass Pro Tour and the Pro Circuit, Neal put together his best year yet.

“Going into the year I was on the fence of whether I should have signed up for both [tours] or not,” Neal said. “I didn’t know if I would be able to do it stamina-wise, and I wasn’t sure if I would get burnt out. But I really think that’s what has caused me to have the year I have had on both sides. When I’m home I don’t fish, ever. Just spending more time on the water, it doesn’t matter if you’re smallmouth fishing, largemouth fishing, in Florida, New York or Texas, you’re still staying in tune with the fish and making decisions and staying in rhythm.”

Now, with his best smallmouth finish ever under his belt to cap off an AOY season, Neal feels like he’s really accomplished something.

“I consider this a win, it’s not one tournament, but it was the best for the year,” Neal says. “I feel like now I’ve got an accolade I can hold as a career accomplishment that’s better than a win. Now that’s done, maybe some wins will follow.”

With a BPT event this week on Lake Champlain and then the Tackle Warehouse TITLE Presented by Mercury on the Mississippi, Neal will have some opportunities to get a win in short order. Then, he’ll finally get to go home to East Tennessee.

“It’ll probably be a party when I get back,” Neal chuckled. “Which will be about a month from now.”