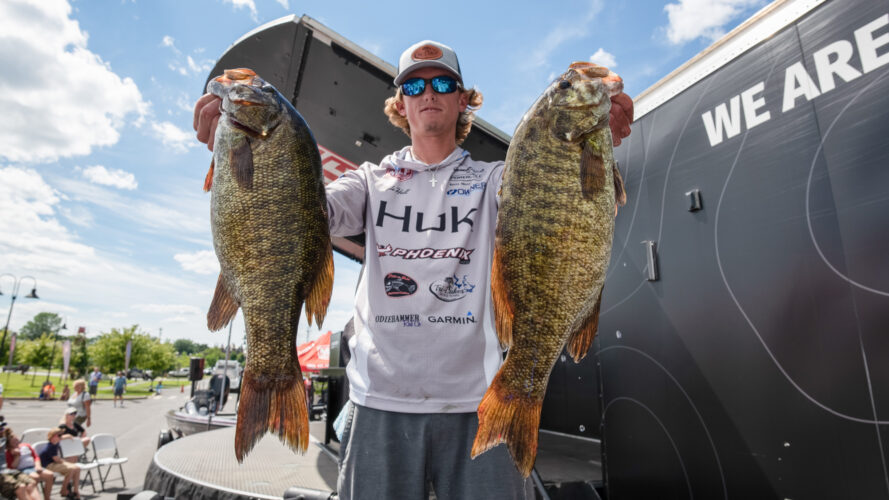 PLATTSBURGH, N.Y. – Chasing the first major title of his career, pro Kyle Hall of Granbury, Texas, regained his lead on Day 3 of the Tackle Warehouse Pro Circuit Covercraft Stop 6 at Lake Champlain Presented by Wiley X on Sunday. Hall weighed in 19 pounds, 14 ounces to move his three-day total to 61 pounds, 9 ounces, giving him a 10-ounce lead over B&W Trailer Hitches pro Kyle Cortiana of Broken Arrow, Oklahoma, who ended the day in second place with a three-day total of 60 pounds, 15 ounces.

Lake Champlain continues to show out for anglers across the board, including pro Andy Newcomb of Camdenton, Missouri, who maintained his third-place position with a limit weighing 19-4, good for a three-day total of 60-15. Favorite Fishing pro Matt Becker of Finleyville, Pennsylvania, finished the day in fourth place with a limit weighing 20-3 to bring his three-day total to 60-13, while pro Dakota Ebare of Brookeland, Texas, brought a limit to the stage weighing 20-4 for a three-day total of 60-4 to round out the top five.

The top prize of up to $135,000 is ripe for the picking as the final 10 anglers resume competition tomorrow on Championship Monday, where weights are zeroed and the angler that catches the heaviest five-fish weight will be crowned the champion of the Tackle Warehouse Pro Circuit Covercraft Stop 6 at Lake Champlain Presented by Wiley X.

Hall, who was the 2020 Pro Circuit Polaris Rookie of the Year, said he knew from the moment he saw the 2022 schedule that he would be hunting smallmouths on Lake Champlain, but the Texan never expected he would be leading the Top 10 into the Championship Round.

“I’ve had a terrible year, so it feels great to be sitting in first place going into the final day,” said Hall, who is going into his first Championship Round this season on the Pro Circuit. “If you had told me I’d be in first place after the third day of competition, I wouldn’t have believed you. I knew I had what it took, and I knew what to do and where to do it, but sometimes I’m a little stubborn.”

Hall said the difference this event is that he is forcing himself to sit and cover a lot of water on the trolling motor, instead of firing up his outboard and running to various areas across the lake.

“I’ve really only hit two spots this entire tournament, which is unusual for me,” Hall said. “I’m normally running and gunning but knew I couldn’t do that successfully at this event.

“I was going for 20 pounds today and caught 18 pounds pretty quick this morning, But, by 9 a.m., I couldn’t get another bite. I stayed on that spot until 12:30 – over three hours without a single bite – before running to my other area where I had success the first day. I fished there for 15 minutes and caught a 4½-pounder and three more that didn’t help, but that kicker fish made all the difference.”

While Hall said he plans to start the final day in the same location, he has several other places to fall back on if his primary spot dries up.

“My game plan tomorrow is to go stick it out on that spot because there are obviously big fish there and with the number of fish I saw today, compared to how many were there Friday, they are definitely loading up,” he said. “I’ve just got to hunker down and sit on it like I’ve done on the other spot the last three days.”

The Top 10 pros advancing to the final day of competition Monday on Lake Champlain are:

Anglers finishing 11th through 50th are:

Anglers were also vying for the prestigious 2022 Tackle Warehouse Pro Circuit Angler of the Year (AOY) title that is determined by the most points accumulated over the six Pro Circuit events in 2022.

Reigning AOY Michael Neal of Dayton, Tennessee, once again clinched the 2022 Pro Circuit AOY title Sunday, after ending the event in 15th place. Neal overtook Josh Butler of Hayden, Alabama, who had a 14-point lead coming into the event, and now becomes the third pro in Tackle Warehouse Pro Circuit history to win the AOY in consecutive years, joining Andy Morgan of Dayton, Tennessee, (2013, 2014) and David Dudley of Lynchburg, Virginia, (2011, 2012). Neal will receive his entry fees paid for the entire 2023 Tackle Warehouse Pro Circuit season for his win.

“I came into the year with the goal of winning AOY again, and while the reality of that didn’t seem very possible, you’ve always got to have those types of goals in mind,” Neal said. “However, to actually win it and to be in the company of the other anglers that have achieved that goal – that’s pretty special.”

The Tennessee pro said he is ecstatic for the win but has no intention of letting up on the gas, and plans to finish out the season strong at the Pro Circuit TITLE on the St. Lawrence River next month in Massena, New York.

“A championship win is what my career is lacking at this point,” Neal said. “I had a good finish on the St. Lawrence River at the TITLE last year and I’m starting to figure out smallmouth a little better, so I’m looking forward to that as well.”

Overall, there were 250 bass weighing 857 pounds, 1 ounce caught by 50 pros Saturday. All 50 competitors brought a five-bass limit to the scale.

The Tackle Warehouse Pro Circuit Presented by Fuel Me Covercraft Stop 6 at Lake Champlain Presented by Wiley X is hosted by the City of Plattsburgh and the Adirondack Coast Visitors Bureau and features a total purse of more than $850,000.

In Tackle Warehouse Pro Circuit competition, the full field of 154 anglers competed in the two-day opening round on Friday and Saturday. The Top 50 pros based on their two-day cumulative weight advanced to Sunday. Now, only the Top 10 pros, based on cumulative weight from the first three days, will continue competition on Championship Monday, where weights will be zeroed and anglers will compete in a one-day shootout for the grand prize of up to $135,000, including the lucrative $35,000 Phoenix MLF Bonus for qualified anglers.

The final 10 anglers will launch at 6:30 a.m. ET Monday from the Plattsburgh Waterfront, located at 5 Dock Street in Plattsburgh. Monday’s Championship weigh-in will also be held at the waterfront at 2:30 p.m. Fans are encouraged to attend the event or follow the live on-the-water action online on MLF NOW! beginning at 7 a.m. ET at MajorLeagueFishing.com.