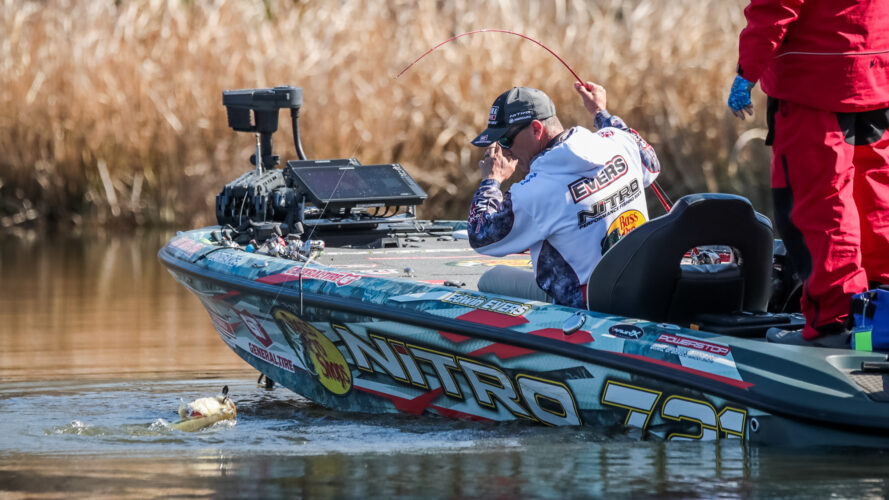 The five-day tournament, shot for television broadcast on CBS, the Discovery Channel and the Outdoor Channel, will showcase the Top 41 Bass Pro Tour anglers from the 2021 season competing for the prestigious REDCREST Championship and the top prize of $300,000.

Originally scheduled to be held at Oklahoma’s Grand Lake O’ the Cherokees last year, MLF officials shifted REDCREST 2021 to another venue after the cancellation of the REDCREST Outdoor Sports Expo that had been scheduled to be held in conjunction with the event. It’s now all systems go for 2022 and the league, the professional anglers, and fishing fans from all over the country are excited for Tulsa-based Major League Fishing’s homecoming event.

“We are proud to host the Major League Fishing Bass Pro Shops REDCREST 2022 next week,” Tulsa Mayor G. T. Bynum said. “This will be a large, family-friendly event with world-class anglers, and we also get to watch a Tulsa-based company thrive and shine on a national stage.”

“Working hand-in-hand with Major League Fishing on this event is always a joy and this year is no different,” said Ashleigh Bachert, Interim SVP for Tulsa Regional Tourism. “You can definitely feel the local investment from this Tulsa company as their all-in mentality for putting on the absolute best event is dialed to 11. REDCREST 2022 will be one for the – hooks.”

The General Tire Take Off Ceremony will begin each day at 6:45 a.m. at the Wolf Creek Park and Boating Facility, located at 963 N. 16th St. in Grove, Oklahoma. Anglers will depart daily at 7:30 a.m. from the park and return after competition ends at 4 p.m. Fans are welcome to attend all launch events and also encouraged to follow the event online throughout the day on the MLF NOW! live stream and SCORETRACKER® coverage at MajorLeagueFishing.com.

“We’re hitting it right when the lake is coming out of hibernation – it’s probably the best week of the year that this event could happen,” said Edwin Evers of Talala, Oklahoma, who won the inaugural REDCREST event in 2019 on the Mississippi River. “It’s like light-switch week. The weather is looking good, and this event could be off the charts good.

“Guys are going to be able to catch them every way you can possibly imagine,” Evers said. “I expect that it will mainly be a prespawn, staging-type bite, but I would not at all be shocked if there were fish spawning by the end of next week. The key to doing well is going to be staying fluid and changing with the conditions.”

Evers said that he thinks an angler will be doing alright if they catch 10 to 12 scorable bass per day.

“The Bass Pro Tour can be so hard to predict, because of the catch-all-you-can format and the zeroing of the weights – it could be anywhere from 45 to 90 pounds on that final day,” Evers said. “But the lake is in really good shape, and guys are going to be spread out.

“I’m most excited about this event happening right here, in the heart of the country,” Evers said. “This community eats, sleeps, and breathes bass fishing. I expect that a lot of people are going to have a lot of fun, and this one is going to be a really special event.”

As part of the event, Major League Fishing is hosting a FREE, family-friendly Outdoor Sports Expo Presented by Costa throughout the weekend, March 25-27 from 10 a.m. to 7 p.m. each day at the SageNet Center at Expo Square in Tulsa. Fishing and outdoor enthusiasts will have the opportunity to visit more than 130 booths and vendors, showcasing the latest and greatest in fishing, boating, hunting, camping and more.

The biggest names in the outdoor industry will be on hand, including all 80 of the professional anglers that compete on the Bass Pro Tour, fishing legend Jimmy Houston and The Bone Collector’s Michael Waddell. Children are welcome to visit the Bank of Oklahoma Kids Zone to meet Skye & Marshall from PAW Patrol, fish for catfish in the Kids Fishing Pond, show off their artistic skills at the coloring stations, and more.

Giveaways and prizes include signed MLF angler jerseys, rods and reels, 50” and 60” TVs, gift cards , and more. On Friday and Saturday night, one lucky attendee will play for $100,000 in the Bully Dog Pick ‘Til You Win game, and on Sunday one lucky attendee will walk away with a brand new 2022 Toyota Tundra. For more information on the MLF Outdoor Sports Expo Presented by Costa, visit REDCRESTExpo.com.

REDCREST 2022 Presented by Costa at Grand Lake O’ the Cherokees will feature anglers competing with a 2-pound minimum weight requirement for a bass to be deemed scorable. Minimum weights are determined individually for each of the competition waters that the Bass Pro Tour visits, based on the productivity, bass population and anticipated average size of fish in each fishery.

All 41 Anglers will compete on Day 1 (Wednesday) and Day 2 (Thursday) of the event. After two days of competition, the field is cut to just the Top 20 based on two-day total cumulative weight. The remaining 20 anglers are split into two groups – 10 compete on Day 3 (Friday) and 10 compete on Day 4 (Saturday). The top five anglers from each group based on total single-day weight will advance to the fifth and final day of competition (Sunday), where weights are zeroed and the angler that catches the highest total weight on the final day will be crowned the REDCREST 2022 champion.

The 2021 Bass Pro Tour featured a field of 80 of the top professional anglers in the world competing across seven regular-season tournaments around the country. The Top 41 anglers in the Angler of the Year standings after the seven events qualified to compete in REDCREST 2022 Presented by Costa.