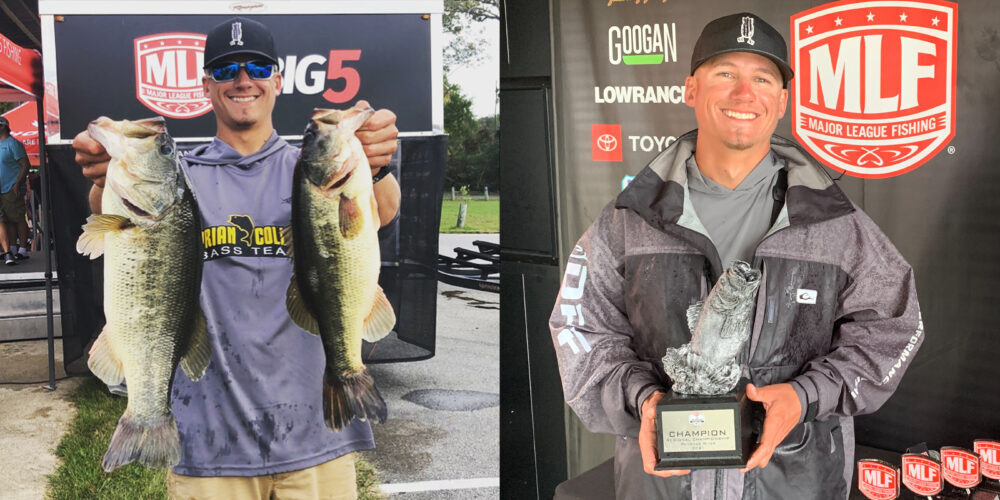 MARBURY, Md. – Pro Jarrett Martin of Westerville, Ohio brought a three-day total of 14 bass to the scale weighing 47 pounds, 7 ounces to win the Phoenix Bass Fishing League Regional Championship Presented by T-H Marine at the Potomac River Presented by THE BASS UNIVERSITY TV. For his victory, Martin earned $62,500, including a Phoenix 819 Pro bass boat with a 200-horsepower Mercury outboard and $10,000, along with lucrative contingency awards, including up to an additional $7,000 Phoenix MLF Bonus. Martin also received automatic entry into the 2022 Phoenix Bass Fishing League All-American Championship, June 2-4, at Lake Hamilton in Hot Springs, Arkansas, as well as priority entry into the Toyota Series – the pathway to the Tackle Warehouse Pro Circuit and ultimately the Bass Pro Tour.

Martin said he mined a stretch of mats in Pohick Creek most of the event, which is where a majority of the other contenders fished as well.

“Pre-fishing was a little bit rough,” said Martin. “I tried to go run a lot of the patterns I’ve run in the past – I’d been there twice and had caught a couple of fish on docks – but I couldn’t get a solid run going like I have before. So, it resulted in going into and really dissecting the creeks. I fished nonstop but really never found anything in practice until the last day, when I finally went up into Pohick.”

In Pohick, Martin said he immediately started to get quality frog bites. Though he didn’t catch any, he had a good starting spot, and said when he found the area during practice, no one else was around.

“I pulled in the first morning of the tournament, and there were already six boats all over the entire flat,” said Martin. “So, I went into the corner where I had caught them and started going back and forth, on like a 100-yard stretch. I just went back and forth on it all day. When the tide was wrong, the fish would come up and hit it, but they’d never actually eat it until that tide got right.”

As Day 1 continued, Martin said he figured out that the tide needed to be at a certain level for the fish to bite, but whether it was rising or falling didn’t seem to matter.

“I figured out that a 1.9-foot tide was the best tide,” said Martin. “Regardless of it going up or going down, for some reason, right there in that spot I was in, once 1.9 hit you could see big red crawdads come up to the surface and start flicking around in that scum, and man, they just started eating. You’d get a 30-minute window where they would just eat.”

On Day 1, Martin only caught 14-5 all day. On Day 2, he hit the tide just right and put the biggest bag of the tournament on deck first thing.

On the final day, however, Martin said he was thrown a significant curveball by the weather. With most of the top anglers also fishing in Pohick, adjusting wasn’t an easy task.

“On Day 3, I rolled into the same location, and the wind was blowing in there. I pulled in, and looked at my waypoints, and I’m already 20 yards past my waypoints, going to the mats. I was sitting where the fish were. I was like ‘This is bad, this is not ideal.’”

After scratching out one keeper early on, Martin got dealt another round of bad luck. The fish in Pohick started biting, but for the anglers who were fishing alongside him – not where Martin was.

“For some reason, those fish started to fire off to the right,” said Martin. “As soon as those fish fired, everybody kind of circled up and tried to get in on the action. I was pretty much blocked out and didn’t want to go in there. So, I pulled the plug around 10:30 or 11, and ran to the other side and caught a 3-pounder and put it in the box.”

Around 11:30, with just two in the box and his main area wrecked from the wind, Martin said he knew things were slipping away.

“Luckily, my co-angler [Brian Short] had caught some good ones in Mattawoman,” said Martin. “At probably 11:30, we decided to send it on back there. So, we run back, start fishing this mat, and like the fifth cast, I catch a 4-pounder. We go a little farther, another 20 minutes, and I catch a 3-pounder. That was all I could get, so thank goodness for him having caught some fish there the day before.”

Four fish on the final day ended up being enough to get the job done, sending Martin home to Ohio with the biggest payday of his career, all while catching literally every one of his fish on a frog. Doing most of his work with a SPRO Bronzeye 65 in black, Martin said he also caught a few on a BOOYAH Pad Crasher in cricket frog. For his tackle, he rolled with a Shimano Curado, a 7-foot, 3-inch, heavy power Daiwa Tatula Elite and 65-pound Sufix 832 braid.

A Project Engineer at Thomas Door Controls, Martin said he has won before in college and fished live on the final day of the National Championship, but this was his biggest win to date.

“I don’t think it’s really fully processed yet,” said Martin. “I drove 8 hours home, right after the tournament, and I had tons of phone calls and texts. I just answered the phone the whole time, I never listened to music or anything. I couldn’t believe it. This is what we work for – this is what everybody works for. There are so many factors that go into creating success on tidal water, so pulling out the win and making the All-American is definitely a dream come true. I think the All-American is one of the most coveted tournaments out there, and I never thought I would be in this position.”

Martin took home an extra $2500 as the highest finishing Phoenix MLF Bonus member. Boaters are eligible to win up to an extra $7,000 per event in each Phoenix Bass Fishing League Presented by T-H Marine tournament if all requirements are met. More information on the Phoenix MLF Bonus contingency program can be found at PhoenixBassBoats.com.

The Phoenix Bass Fishing League Presented by T-H Marine Regional Championship on the Potomac River was hosted by the Charles County Board of Commissioners. It featured the top pros and Strike King co-anglers from the Buckeye, Michigan, Northeast and Piedmont divisions.